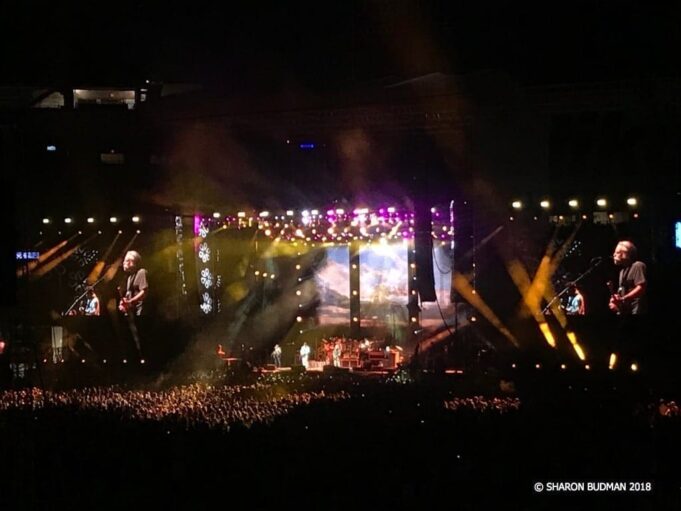 Full Show Audio, use the Arrows to Toggle between songs.

Summer is upon us…and what a glorious night it was. Could not have asked for better weather – not too hot – not too cool – simply perfect for night one of the two-night NYC stop on the 2018 Summer tour.  Personally, so happy to be back in the mix… couldn’t think of a better way to dive right in. As for me, and you really don’t have to agree, in my opinion, last night was just simply an outstanding performance. The band was on fire from the first note to the last. The boys were back, Bobby, Mickey, Bill, Oteil, Jeff and John.  The stadium, however, was noticeably not too full. Frankly, saying it was potentially 65% occupied could be a bit generous at best.  At some point, stadium personnel were actually moving people from the 500 level down to field level seats; lucky for them.

As usual the crowd was just a bunch of smiling, happy people. Oh, and something also worth mentioning… the attendees, at least in my section and those adjacent, appeared to be considerably younger than the crowds I’m used to seeing at these shows. This was extremely refreshing to see, lots of people in their mid-twenties, families with their teenage kids, and even some with elementary and middle-school age children.  This really speaks to the casting of a larger net and following. The band took the stage around 7:40pm for their 7:30pm show and it was sizzling right out of the gate – kicking off the evening with an incredibly powerful Shakedown Street. The opener was full of fire and filled with powerful jams – – a good fifteen minutes worth.  Mayer was clearly in the zone and Chimenti was, as always, smiling, and a master of those keyboards.  “Wow” – a word I found myself saying rather frequently during this show.

From Shakedown, they went right into Alabama Getaway, also strong but not as long in duration.  The remainder of the first set was really tremendous in so many ways especially with Mayer nailing “Hurts Me So” (first recorded in the 1940’s by blues musician Tampa Red and subsequently recorded by Elmore James , Chuck Berry, Eric Clapton, and the Grateful Dead just to name a few). The tempo of this set and the show was great, the jams were really amazing and even a bit bluesy, and the voices were really strong and on point.

Set break was a whopping 45 minutes… but understandable – and the crowd didn’t seem to mind.  Set 2, not much different from Set 1 in that there was a lot of synergy; they were feeding off of each other, each on top of their game.  They kicked off the set with some jazzy, kind of spacey jam which transformed into Coltrane’s “A Love Supreme” and that just morphed into “The Other One” with outstanding guitar playing by Mayer and Chimenti, simply a master of those keys.

One after another, the transitions were clean, they owned each and every song both instrumentally and vocally. Bobby was singing last night; his voice was strong and he sounded good; maybe the day off helped, whatever it was, it did him good. Midway through the second set, was a tremendous Althea, sung by John Mayer, clearly a favorite for featuring Mayer on vocals. The scorching jams continued in this set into “Lady with a Fan” > Terrapin Station > Drums and Space. Oh my, Drums and Space. Yes, that absolutely was the icing on the cake for me.  It was not the electronica we heard on the last tour.  This time it was the “classic” (for lack of a better term) Drums and Space which, of course included the infamous beam.  It was special as it wasn’t just the Rhythm Devils – they had a plus one – -Oteil grabbed his drum sticks and the three of them took us on a journey that was an indescribable and kind of outta this world.

The set continued with a couple more songs including most notably Bobby singing “Days Between.”  Again, his voice was strong and filled with emotion. The band closed out the 2nd set with U.S. Blues, switching off on the vocals between John, Bobby, and Oteil.  They exited the stage for a few only to come back for a single song encore. During the encore, “Going Down the Road Feeling Bad” (GDTRFB) they paid homage to their former production manager Chris Charucki (a Brooklyn native) who passed away earlier  this year by sharing his picture on the screen behind them and Bobby donning a “Charuki shirt.”

All in all, the evening was wonderful.  Everyone appeared to really be enjoying the show, the weather, and the vibe.  Clearly, they were “Dead on” both instrumentally and vocally, each and every one of them and it was a delight to see, hear, and experience. Glad to be back!  Summer tour, night 1 of 2 – in the books – – with the WIN…. Can’t wait to see what night two will bring.

Sharon Budman is a long time Deadhead, a live music traveler and the owner of 31-30 Creative Arts Marketing.