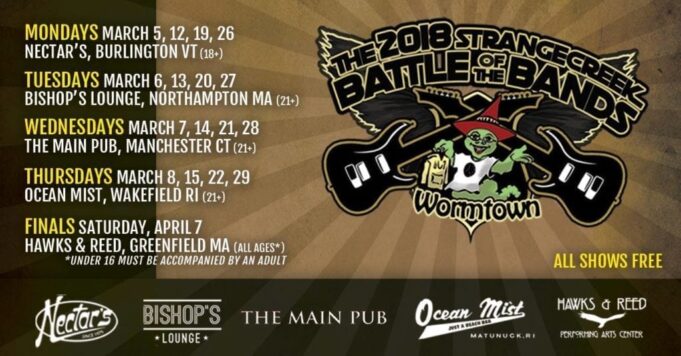 After a month of battles, including battles battling snow storms and delays, the regional finals were complete and the finale for the Strangecreek Battle of the Bands was here.  Finalists from all four states:  Tales of Joy who won the CT battle at the Main Pub in Manchester, Doctor Rick who won the Vermont battle at Nectar’s, Northeast Traffic who won the RI battle at the Ocean Mist, and Long Arm Rex who won the MA battle at Bishop’s Lounge all came together for a final contest. Each band took the stage for a set of around 45 minutes.  First up: Tales of Joy from CT.  This is a show band!  They wore great sparkly suits, and had a very tight and directed show. They are a reggae band focusing on what I think of as 80s reggae, not deep roots, not dub, not dance hall but easily digestible reggae that is electric and shimmers.  Elements of Steel Pulse, Peter Tosh, and even English influenced reggae like UB40 and Madness infuse their sound.  They were tight, had good stage movement and excellent musicianship.

Check out the full gallery of photos of Tales of Joy by Vinny  Natale here.

Next up: Doctor Rick from Burlington Vermont.  The band is a pretty standard Vermont-style jam band, with a heavy blues influence on their material.  Americana and blues provides a good rootsy foundation and from there they were able to launch into their explorations.  They were good, tight, rootsy and relate-able. The room was filling up quite nicely with fans of all of the bands coming in to support their favorite.  Plus, the burgeoning music community of Greenfield, who will be hosting the festival this Memorial Day weekend- was well represented from the curious coming to see what it takes to get onto the area’s festival schedule.

Check out the gallery of photos of Doctor Rick by Vinny Natale here.

Northeast Traffic from RI was the third band to take the stage and strut their stuff.  Like Doctor Rick, they are a rock and blues influenced jam outfit.  They were full of energy on this night and you can tell that they wanted to win.  At one point I lost track of one of the band  members- the front and center guitarist singer was nowhere to be found.  But then I spotted him- on the floor of the stage soaking up the vibes directly into his body- and then BAM!  he was up and jamming again. Full show audio, use the arrows to toggle between songs.

And finally- Long Arm Rex hit the stage.  Hailing from Boston, this band took the MA crown down in Northampton and I saw all of those battles myself so I was very familiar with them. This is the third time I have seen them in the last month, alone!  So I am a bit biased maybe-  The band is a mixture of traditional and modern reggae influences, in what I call progressive reggae- elements of Cali Roots, dub, and dance hall flavor a pallette of traditional reggae.  Front woman Caroline has a lot of energy and spends time both on and off the stage.  Her vocals are mixed with effects that she controls herself with a pedal board. Conspicuous in her absence is bass player Alexa who was unable to attend  that night-  but never fear, the band did have an excellent sub bass player.  And Alexa was present somehow anyway because her sub was wearing a t-shirt with a giant picture of her on stage, so it almost felt like she was there!

The vibe was super celebratory and you could feel winter’s grip on the festivarians loosening if even a little bit.  Strangecreek represents the first big festival of the spring, and you just know that people are itchy for it in New England after such a long and never ending winter. The best thing about both this night and the Worm scene in general is that even though this is a battle of the bands, nobody was overly hung up on winners and losers.  The vibe was very family-oriented and everybody was just having a good time and hanging out together.   After the final band and some deliberation by the Worm crew, Mark Blanchette, festival owner took the stage, and in true family Worm fashion, declared us all winners-  each band will be making an appearance at Strangecreek this year.  There may be some semantics as to a ‘winner’, perhaps Northeast Traffic– getting a more coveted late night cabin slot, but other than that it was clear that all the bands really represented themselves well and will fit in nicely into the Wormtown / Strangecreek scene. Quite sated, we went into the night, and drove back to our rural Pioneer Valley home, with dreams of Strangecreek Campout in our heads.  Memorial Day Weekend cannot come soon enough!