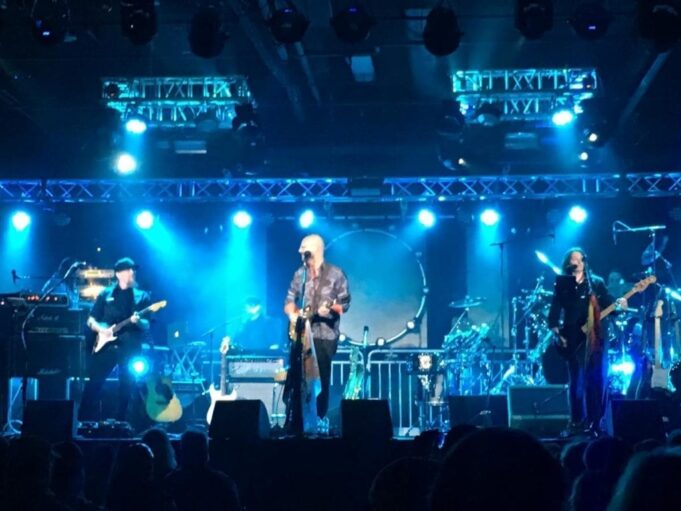 Friday, March 31st saw the return of Northern Nevada’s own Pink Floyd tribute, The Floyd, to Cargo Concert Hall in downtown Reno.  In what has become an early spring tradition, The Floyd treated the sold-out crowd of 450 to 2 sets, and about 3 hours, of Pink Floyd classics from the albums Dark Side of the Moon, Wish You Were Here, Animals, and The Wall (with one pre-Dark Side cut, Echos).

The evening kicked off with a trio of acoustic performances by friends of the band.  Tyler Stafford offered an interpretation of Pigs On The Wing followed by Joel Ackerson and Grace Hutchinson performing Mother.  Katie Cottier and Eric Anderson then joined this duo for Goodbye Blue Sky. These performances, along with local Reno DJ legend Max Volume thanking the audience for “turning off Netflix, getting off the couch, and going OUT to see live music” set a nice tone for the evening.

While Pink Floyd is typically thought of as a quartet, it’s worth noting that on recent solo tours Roger Waters and David Gilmour have used no less than 10 or 11 musicians (including multiple guitarists, keyboardists, and singers) to recreate Pink Floyd music.  As a band known for experimenting in the studio, using multiple overdubs, and having each member playing multiple parts, recreating the music is a challenge even for the original creators.

The Floyd has been carefully crafted as a sextet.  Drummer Nick Rossi and keyboardist Rob Lawrence are the unsung heroes of the band, providing the foundation that all of the songs are built upon.  Jeff Laakso, the “swiss army knife” of the band, joins them in the backline. His additions on keyboards, guitar, saxophone, and backing vocals (in addition to his lead vocals on the opening tune, In The Flesh) are key in creating the big, lush sounds that Pink Floyd is known for.  Laakso and Lawrence do a fantastic job of recreating all the subtle sound effects and tape loops in addition to the more traditional organ, piano, and synthesizer parts. Rossi has clearly immersed himself in the spirit of drummer Nick Mason, masterfully recreating the driving rhythm with all the details of the original recordings.

Vince Gates, credited by his bandmates as “leader” of the band, took the majority of the lead vocals and added an authenticity to the evening switching between bass, electric guitar, and acoustic guitar.  Indeed, while he did an admirable job on the Gilmour led songs he sang, he really shined on the Waters sang tunes (Gates certainly felt like the “Waters” of the band). The tunes performed off of 1977’s Animals were particular highlights of the evening for me, especially the duel guitar solos performed by Gates and lead guitarist Curt Mitchell.

While Roger Waters is often credited as the creative genius behind Pink Floyd’s songwriting, few would argue that David Gilmour is the superior musician and singer (in fact, Gilmour also played bass on many of the recordings).  The majority of Gilmour’s guitar parts (including the slide guitar in songs like Breathe), as well as some of his more “rocking” lead vocals (Have a Cigar and Young Lust) fell to Mitchell. Mitchell’s command of his instrument and voice were evident throughout, even if his Marshall Amplifier tone and “shredder” guitar style didn’t always match the nuance and catch the subtleties of some of Gilmour’s original playing.  Mitchell’s energy and enthusiasm were contagious and kept the audience fixated throughout the night.

Last, but certainly not least, Lisa McCulston fills a vital role in any recreation of the latter half of the Pink Floyd catalog, the female background singer.  In addition, she switched effortlessly between bass and rhythm guitar depending on which instrument Gates was playing. Whatever your opinion is of Gilmour vs. Water singing, the most famous Pink Floyd vocal performance must be “The Great Gig In The Sky” (originally sang by…Clare Torry, who also gets a songwriting credit on the album).  McCulston didn’t only do the song justice but provided one of the highlights of the evening. Having seen Pink Floyd and Roger Waters numerous times over the years (sadly, never together) I’ve seen many extended versions of this song, and I was slightly disappointed that McCulston didn’t take the liberty of extending out her amazing version of this song.

In general, The Floyd stuck to the “hits” and the most well-known songs from Pink Floyd’s most popular albums.  As I mentioned in the beginning, the only song from the earlier works was a rather abbreviated version of Echos off of 1971’s Meddle.  Other potentially more extended tunes, such as Shine On You Crazy Diamond and the aforementioned Great Gig in Sky were kept short and sweet.  While I fully understand the band’s desire to make sure they played all the songs the audience expected to hear and to keep the performances tight and focused, I would have enjoyed to see these wonderful musicians “stretch it out” a bit more on occasion and perhaps pay homage to Pink Floyd’s more psychedelic beginnings.  As a huge fan of Pink Floyd’s early work myself, it would have been fun to see The Floyd’s interpretation of a tune or two from the earlier albums. Interestingly, for me, some of the less compelling performances of the evening were the biggest “hits,” Money, Another Brick in the Wall Part 2, Comfortably Numb, and Young Lust.

However, my biases aside, The Floyd provided a fantastic and fun evening of quality entertainment.  Production details, like lasers, quad-sound effects, and a small round screen, just added to the authenticity of the experience.  Pulling off a quality Pink Floyd tribute is no small feat. Pink Floyd can perhaps be credited with launching the entire high end “tribute band” genre.  Groups like The Australian Pink Floyd Show and Brit Floyd put on multi-million dollar recreations of the Pink Floyd experience while touring the world and bands like The Flaming Lips, Government Mule, Les Claypool, and Phish have recreated Pink Floyd albums live.  The Floyd clearly deserves a place on this list (props go to Rossi who was credited with overseeing the production details), and I look forward to seeing them in the future as they refine and grow their version of the Pink Floyd experience!

Another Brick In The Wall 1

Happiest Days Of Our Lives

Another Brick In The Wall 2

Another Brick In The Wall 3

Great Gig In The Sky

Wish You Were Here

Great Gig In The Sky

Shine On You Crazy Diamond