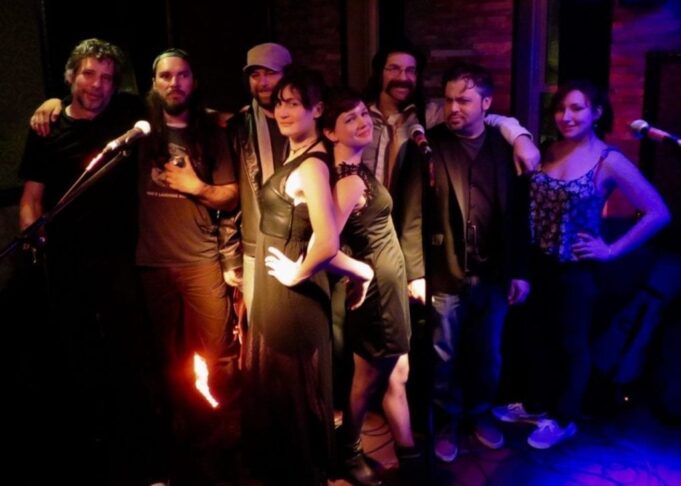 Full show of Leon Trout, use the arrows to toggle between songs.

A three-hour snow shower occurred Friday afternoon, with everyone acting surprised that a small snowstorm that happens every five years or so in New England in early April happened this year.  Ah winter, you are a houseguest that just won’t leave. . . This briefly chilly event did not cool the festivities at Bishop’s Lounge with what turned out to be a big birthday party coupled with a Strangecreek campout festival warm-up.

Check out the huge galleries of photos from this show by Vinny Natale.

Leon Trout, a four-piece band from Boston MA made their first appearance in the cozy lounge, and threw down just over an hour of improvisational jam rock.  Mixing some originals with healthy dose of interpretive covers, the band snaked and meandered from jamtronica to hard rock with dexterity and energy. The band featured a dual-pronged guitar attack in Aaron Cram and Avsha Elan, and it was Avsha’s birthday so he was getting in on the celebration action!

Up next was rice: An American Band who came a full eight people strong on that night.  Kyle Heon on drums, Lauryn Winiarski on bass, Steve Benson on pedal steel, mandolin, and vocals, Emily Jones on vocals, Courtney Parker on vocals, Phil Simon, another birthday boy on guitar and vocals, Brian DiMartino on guitar, and Joshua Leach on guitar.  They stretched fully across the performance area and had to invade the audience a bit in order to fit into the tiny confines of Bishop’s Lounge.

From the video channel of Overtain Productions:

They unfurled two full sets of raucous Americana and Rock, leaning on jams a bit but sticking mostly to vocal tunes that stretched the history of the band. Western MA fixture and Wormtown ambassador Woody from Rebel Alliance joined the band for a version of Bob Marley’s Cornerstone.  His bass tone contributed to a harmonic vocal richness that was super fun and with nine people on the stage at that moment, Bishop’s was rocking!

From the video channel of Kelly D

Check out the huge galleries of photos from this show by Vinny Natale.

Five different band members took a turn on lead vocals over the course of the show and the band played mostly originals with a strong dose of covers ranging from Flaming Lips to Floyd, Marley, Soundgarden and even the Cranberries. The two bands will be playing together again in Cambridge/Boston MA at the Middle East on May 3. RSVP to the FB Event here.

Full show audio for rice An American Band, use the arrows to toggle between songs: