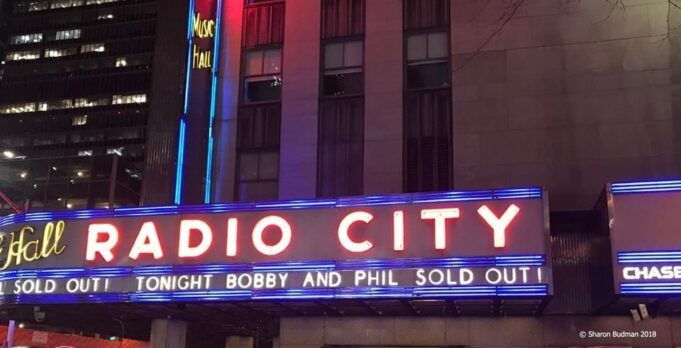 Lucky enough to score presale tickets months ago for Friday night only- I was elated! Fast forward to March 2, 2018 – in the midst of Riley, a strong nor’easter which brought a day and night filled with cold, rain, and snow along with howling strong winds upwards of 50 mph gusts -Wow!! This is NOT the kind of weather I would venture out in EXCEPT. . . how could I miss this show? I initially only had tickets to Friday night.  So off I went into the city and boy was I glad I did.  This was the first ever Bobby and Phil Duo Tour which kicked off in New York City at the beautiful Radio City Music Hall which really doesn’t have a bad seat in the house (not that anyone needed a seat).  Both nights at Radio City were sold out. The tour had a total of 6 nights in 3 cities.   (…and on Saturday afternoon at 3pm I was informed I had a ticket for night 2 – woo hoo!!)

Friday night started with the crowd on its feet welcoming Bobby and Phil to the stage as they opened with an acoustic “Uncle John’s Band.” The duo was accompanied both nights by percussionist Wally Ingram. Much of the audience remained standing for the duration of the entire song and pretty much through the entire show at least in the 1st Mezz where I was located. Throughout the first song they literally played facing each other and both sang. There was a lot of joking back and forth between them. These two sort of reminded me of two old college guys. Bobby joking, “We didn’t get a chance to rehearse that one” – – he had kinda messed up/perhaps forgot a few words. He went on to say that every time we play a song it means something different to each person so we try to change it up a bit. LOL You could absolutely see that they were having such a good time on that stage together. The energy was incredible. The crowd sang along with them to many of the songs. The set list was great; the energy was high; their voices were strong and the graphics were beautiful.  It was truly a duo – each really having equal billing on solos, singing, etc.

Throughout the performance they were very engaging and interactive with the audience; it was really an intimate show among friends.  Bobby told a few stories and jokes.  One memorable story was about when they were living on a ranch and he had been working on a piece of music and he needed a vision. He went out for a drive on the ranch and drove approximately 1.5 miles up the road. He said “I don’t f’n know what I’m looking for but I just have to keep at it.”  That was his “lead in” to “Lost Sailor.”  The energy in the room was infectious and they felt it and they fed off it even mentioning that “this couldn’t happen without the incredible energy.”  At the end of the show, Bobby mentioned the tragedy in Parkland, Florida and said that he is doing all he can to make a change. He and Phil said that that people need to get out and vote (and could even register at the show). They made a heartfelt plea asking us vote those mother f*rs out of office – who take the money from the NRA and don’t do anything to keep our children safe.

The show consisted of two very strong sets of music with a set break in the middle and a single encore. (See set list below)  All I can say is that they truly gave us an impassioned strong performance. They really knocked it out of the park.  I left hungry for more but knew that was my fill – I had no ticket for Saturday night until I did.

I was quite fortunate to get one more – Saturday night.  The show also kicked off just after 8pm to another sold out crowd.  The rumor of the night was that Trey Anastasio was a “special guest.”   That was the word on the street.  The first set was that special duo of Bobby and Phil. Again, they were like two school boys reconnected.  You could tell they ‘loved each other’ and were  really enjoying being on that stage playing together.  From my vantage point, it was awesome watching them feed off of each other’s energy. They were strong both instrumentally and vocally with some really nice harmonizing. Again, it made you feel like you were at a show of and with your friends. There were some tremendous guitar and bass solos.  Phil is a monster on that bass.  These guys are not teenagers but they were having fun as if they were.  The first set, different from Friday night’s show, opened the electric set with “New Speedway Boogie.”  In between the songs, Bobby again was telling jokes to his friends (the audience). Tonight was the duck joke.  The first set was outstanding with a riveting version of “Cassidy” and a tremendous jam, very special.

After the set break, on to set 2.  …and the moment that had been rumored became a reality. The curtain lifted and The Bobby and Phil Duo became the Bobby, Phil and Trey Trio, also accompanied by percussionist Wally Ingram.  WOW – – they kicked off the second set with “Playing in the Band” and boy were they all playing in the band.  Holy crap; they were blowing the roof off the place.  It was beyond incredible to see this. After this song, Phil was so emotional, walking over to hug Bobby and then Trey.  You could feel the emotion and really see how much this all meant to him and to them.  Just an amazing ‘feel good’ moment.  It was so immensely enjoyable to see the dynamic on that stage.  I’m at a loss for words (imagine that) to really describe the vibe, the emotion, and the beyond incredible music they were delivering instrumentally and vocally.  How lucky I was to be there sharing this with so many wonderful people.

The crowd was on its feet most of the night.  You could see the happiness and enjoyment resonating from their faces. Phil was smiling ear to ear. They were playing and facing each other – the energy was insane. “Dark Star” was unreal.  The singing, the jamming, the playing was unbelievable. This evening was such a treat!  There was so much talent on that stage. So much energy in that theater; what a night it was; what an amazing show they delivered.  I was very fortunate to have witnessed history being made with these artists. It was so much fun. Never the same show twice.  While they may play the same song, the interpretation is always different.  Undoubtedly you get a unique experience every time.  They are on to Boston and then Chicago – I wonder what surprises await?