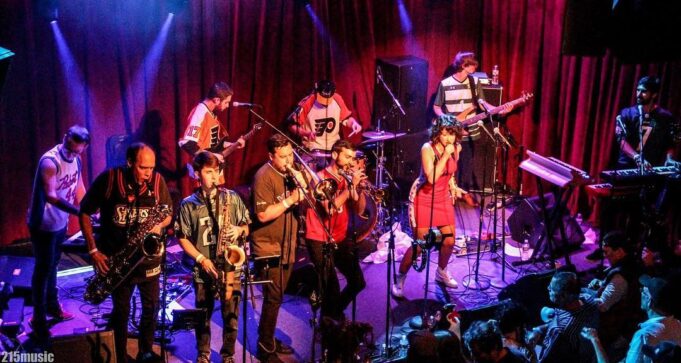 The funky multipiece outfit from Philadelphia embarks on a string of dates from Friday, Feb. 2nd till June and beyond. They recently released a version of the Philadelphia Eagles’ fight song “Fly Eagles Fly” with classic Philly rappers Burndown Allstars (Kuf Knotz, Rok Bottom and Carlos) in honor of the Eagles playing in Super Bowl LII.

Swift Technique, Philadelphia’s fiery funk extravaganza, has been a mainstay on the scene for a decade now. Their unique blend of funk, soul, rock, hip-hop and relentless showmanship has propelled the group into their most successful period to date. The band recently added two new singles, “Lucky Bump” and “Reason to Be” to their ever-growing recording catalogue.

With bombastic horns, thunderous bass and drums, driving guitar and keys, and more dance moves than you can shake a booty at, Swift Tech’s live performances are unmatched in energy, musicianship and pure feel-good fun. With a recent appearance on the award winning Netflix series, Orange is the New Black, and a remix of the classic Philadelphia Eagles song “Fly Eagles Fly” featuring the Burndown Allstars, the group is commanding national attention.

After forming in 2007 Swift Technique has steadily toured, performed, and recorded all over the country. The band’s sound has evolved at every step, with the members constantly pushing their performing and musical limits. They have shared the stage with all varieties of world-class acts including: The Meters, Wu-Tang Clan, Snarky Puppy, DJ Questlove, Soulive, Fishbone, The Disco Biscuits, Turkuaz, The Motet, Karl Denson’s Tiny Universe, The Main Squeeze, Sister Sparrow & The Dirty Birds, Kermit Ruffins, Deep Banana Blackout, Kung Fu, Orgone, Big Sam’s Funky Nation and Sophistafunk.

Swift Technique have successfully played at top-tier venues in some of the most musically rich cities in the country including: New York City, Boston, Baltimore, Washington DC, New Orleans, Nashville, Chicago, Cincinnati, San Francisco, Los Angeles, San Diego and of course, their hometown, Philadelphia. For Swift Technique, every show is the craziest basement party you’ve ever been to.

Representing Philadelphia in the funkiest way possible, Swift’s mission is to get you grooving, get you grinning, and fill you with the positive energy that world so sorely needs. Come out and see what thousands of satisfied funksters across the US have already experienced, especially at their appearance this February in Baltimore’s Frozen Harbor Fest. With the hype around Swift Technique building at lightning speed, look for these gritty groove masters to take large leaps forward in the coming year! LMNR caught up with Greg Rosen, the trumpet player of Swift Technique, via email to get answer some burning questions.

Tell us a little bit about how the band came to be.

– The band actually started as a live hip-hop group. In 2007 our bassist Jake, who was going to Temple at the time, linked up with a local MC. Jake and our guitarist Andy, who was going to University of the Arts, grew up together and they started recruiting a band from the music school at UArts. We started off playing basement parties and frat houses and that’s kind of where our performance style and energy still come from. We’ve evolved a lot since then. Really we’ve been, like four distinct bands. We’ve had to reset lineups a few times but with our core in place, we keep consistency with the energy and approach. When we moved away from hip-hop, we moved onto instrumental funk, then onto more R&B and soul and now we’re really drawing from all of our past influences to make something pretty unique.

What’s your favorite story from the road so far?

– Probably one of the most powerful moments on the road was on the night of the presidential election in 2008. We were in DC playing a friend’s election party. Everyone was gathered around the TV like it was the Super Bowl. When they announced that Obama won, everyone just stormed out of the house and marched to the White House. Our horn players joined in the parade and even led the entire huge crowd down Pennsylvania Avenue. The energy that night was so happy and uplifting. To take part in that and provide the festivities with some music was really special.

Philadelphia is well-known as a city full of musical legends. What’re some of your biggest influences from Philly? How does the city shape your funky sound?

– Oh man there are so many greats to choose from. When we were a hip-hop group we very much modeled ourselves after The Roots, not just musically but in the way we carried ourselves and performed. Then once you start getting familiar with them you get into all of their extended family of artists like Jill Scott, Bilal, and D’Angelo. Digging into the past a bit we definitely look to the artists from Philadelphia International Records like The O’Jays, Teddy Pendergrass, Patti Labelle, and The Jacksons. They put out some of the most soulful, funky, and polished records of their time. In a more direct sense, a lot of the guys in the band have been taught by legendary touring and studio musicians from Philadelphia. We’ve learned a lot first hand about what it takes to be successful sustain a career as a musician.

Philly has a reputation as a really gritty place but Philly International’s sound was so clean and lush. I think its that contrast and balance that pushes us and a lot of Philly music forward. We always try to bring some edge and aggression to our performances but also want to showcase the extremely high quality of musicians that call Philly home. This city definitely has an underdog quality so we’re out to prove something for sure.

What’s the best show or best lineup/co-bill/whatever, you ever played? Tell us about it.

– We’ve been fortunate enough to share the stage with some of our personal heroes so its really tough to decide. Maybe I’ll split it into different eras of the group to make it easier. When we were a hip-hop group, definitely our biggest moment came when we opened up for The Wu-Tang Clan. When we were an instrumental funk band I think our best opening slot came when we opened for The Meters featuring Page McConnell of Phish. That was a really cool one-two punch. And maybe the most special moment came last summer when we opened for Charles Bradley at XPonential fest in Philly. That was one of his last live shows before he passed away and it was one of those once in a lifetime experiences that will stay with us for a long time.

How was the whole “Orange is the New Black” experience? How did you get picked? What was filming like?

– Its actually kind of an underwhelming story to be honest. Our singer at the time, Nik, was facebook friends with a casting director for Netflix who he’d met through a friend. The guy posted online that he needed a band for an upcoming shoot, Nik replied and pretty much secured us the spot. We had no idea what show this was for until it got pretty far into advancing the contract. We were floored when we found out. The overall experience was really great. Everyone on the set was extremely professional and friendly. The filming itself was very relaxed and fun. The director made sure to give us multiple shoutouts through the course of the shoot and everyone was genuinely appreciative of the work we put in. 10/10 would recommend becoming a TV star.

What are your long-term (and short-term) goals for the year?

– This year is already off to a great start. In the short-term, we have some recordings and video content we’ll be finishing up soon that we’re excited to share with everyone. We’ve got a lot of new music we’ve been working on that we feel is an exciting new direction for the group. Longer-term we’re definitely looking to extend our touring farther and longer. We have our sights set on Colorado and California. We’ve been building a nice profile at some big festivals, so we definitely want to keep that momentum going. We have some preliminary talks to travel overseas for a tour and that would be really incredible. Basically we’e not ruling anything out. We believe the sky’s the limit for us.