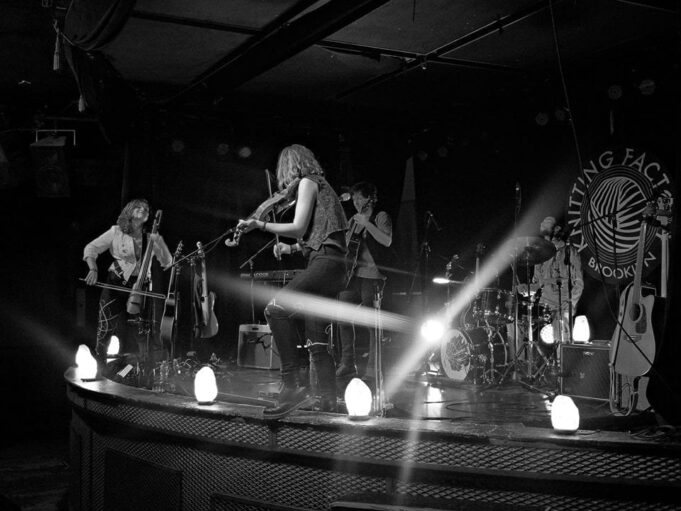 Drop us a line at [email protected] to submit show reviews or story ideas.

The Accidentals, a three-piece garage-folk trio from Traverse City, Michigan, have wrapped up a winter tour this week, and the end of this tour included a stop in Brooklyn, NY for an incredible show at The Knitting Factory.
The Accidentals’ repertoire bends across a multitude of musical moods and colors, and the first emanated was the subdued of something like folky, gypsy classical, played as the trio walked out from a side door, and moved stealthily through the crowd and up onto the stage. Once upon stage, the trio-consisting of Savannah Buist on guitar and vocals, Katie Larson on bass and vocals, and Michael Dause started with one of the tracks from their newest album, Odyssey, “KW,” a funky indie kicker both written about and featuring (on the record) Keller Williams (an influence and also early traveling companion for the band).
It wasn’t long at all before the band was in what obviously was a prime, feeling-good kind of mode for them: Buist, guitarist and first lead singer for the night, was soon enough kicking legs to the timing of her intense yet focused strumming, and Larson was stomping and flailing in her own space. Often the two would be traversing the stage together, sometimes facing one another head on, sometimes leering into venue over the edges of the stage. The first half of the show continued with other numbers from the newest album, such as “Odyssey,” which is just a beautiful and emotionally grabbing tune. A few songs were addressed as being related to the band’s collective struggles with stage fright and general reticence, but this strikes as completely contrary to what you’re seeing and being amazingly presented with on stage: three members who couldn’t look more at command of their performance space, or any more outwardly ebullient with everything they played.
There was a quick instrument switch-the first of several of the night-in which the bassist now picked up electric guitars, and this also initiated a kind of middle, much more garage rock portion of the show. “The Sound A Watch Makes When Enveloped In Cotton” is an awesome banger of a song, a gritty space of several minutes that allowed for Larson to bleed gloriously on a couple of guitar solos. The Accidentals have an edge, a tiny, volcanic grunginess that reveals itself in the bursting open of their acoustic sensibilities, but without ever losing a sense of sophistication.
This also because the entire show kept up a tightness that serves their music terrifically. All three played with a combined focused tenacity that seemed to assure that no matter where their melodies or hooks took one of the members next, the other two would always be right there in time.
“Memorial Day” is a great example of this multi-faceted songwriting. Amped up bursts of rocking braked to an immediate halt time and again for lushly quieter parts, where the vocals of Buist and Larson (and sometimes all three) floated on the air above the room like icy breath on a freezing night. The effect of these musical quick-changes was both artistically surreal and entertaining. They did do a cover song that they noted has also been covered by Bella’s Bartok, another influence for them. But most of their set was original material, and when a band can play a two-hour block of originals and leave you glad for the fact-well that’s a big musical win for a band.
The opener for the night, Jack Allen, joined for the last several songs of the show on both keys and guitar, and to great effect. He rounded out the trio’s wholesome sound to make the last few number really shine just a bit bigger. Then, as coolly as they did in the opening of the show, the trio finished out the night by slinking back off stage, and re-positioning confidently on the floor now in the immediate vicinity of the audience, for another weirdly beautiful acoustic medley of tunes, complimented with spinning movements and more lush harmonies.
The Accidentals finish up their run tonight to Albany, NY, at WAMC’s Performing Arts Center, but they’ll be back in January and February, and you’ll want to catch those. This a band you’re going to want to see before they blow up big time.

Here is a video from the Accidentals stop in Cleveland at the Beachland the week prior to the Knitting Factory show.  From the video channel of Evan the Dancing Guy.

Drop us a line at [email protected] to submit show reviews or story ideas.
Check out the full gallery of photos from this show here.