I was told once that Robert Fripp was said to have remarked in an interview that “I don’t have talent, I have discipline.”  It’s a conundrum of a statement.  Like answering the psychological question, “Is human behavior nature or nurture?”  or the philosophical question, “Is the glass half empty or half full?”  What I would have to say is that Robert Fripp possesses both talent and discipline and it was an absolute pleasure to see this genius at work live at the Egg.  It also doesn’t hurt to surround yourself with a group of musicians who also share this balance of energy in what Fripp has called this lineup his Double Quartet Formation with the likes of Jakko Jakszyk on guitar and vocals, Tony Levin longtime bass player and backing vocals, Mel Collins on wind instruments, three drummers – Gavin Harrison, Pat Mastelotto, and Jeremy Stacey, and a new keyboard player, Chris Gibson who has replaced Bill Rieflin.

Having three drummers definitely makes the hallmark percussive aspects of King Crimson that much more rich and dense.  These instruments were also placed up front and center to showcase the talent (or discipline as the case may be) of these superb drummers as they played off of one another song after song after song.  This stick work was best seen in “Pictures of a City,” which brought a seedier side to this classic In the Wake of Poseidon song.  By contrast, the following song, “Moonchild,” showcased the ethereal and delicate guitar work of Fripp which also featured Levin on electric upright bass.

All evening the pull from the darkness of the beating drums played against the airy and light rhythm of the wind instruments, keyboards, and guitars.   “The Court of the Crimson King,” played halfway through the first set, is a perfect illustration of this dichotomy and was so on point that half the theatre gave it a standing ovation at the end.   As the show went on, Jakszyk’s vocals became stronger, more poignant and seamless.  I could hear the different tonal aspects of the original studio singers being channeled through Jakko without him losing his own voice.  They ended the first set with “Islands,” which featured a beautiful sax solo.  “Islands” was much longer and fuller than the studio version and had a jazz improv feel, which reminded me of other jazz-influenced bands and songs I love, especially in the jam band scene. 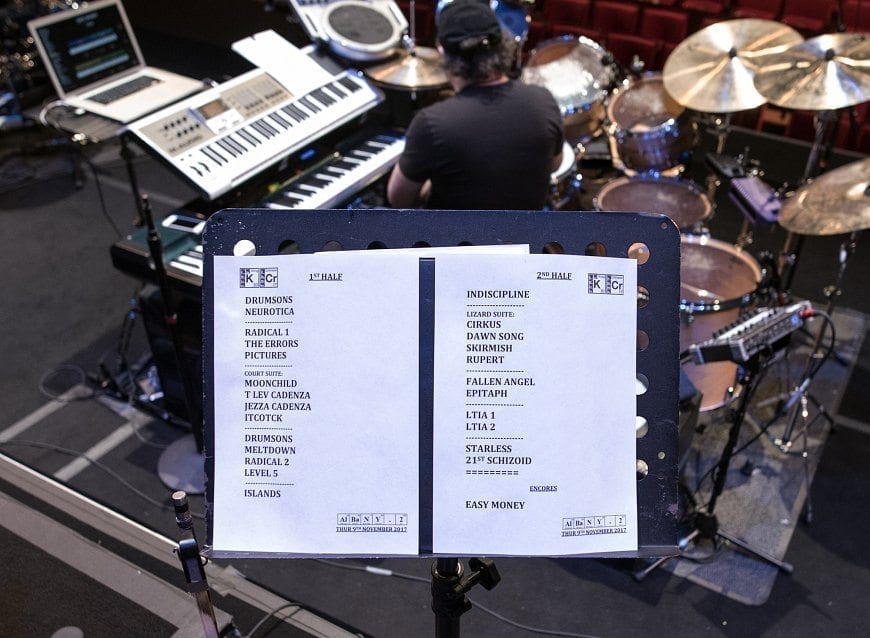 Intermission was an interesting affair and The Egg is a unique venue architecturally from both outside and within.  However, what most amused me was the line for the bathroom…the men’s bathroom.  Which, if you are familiar with the typical prog rock crowd, is not so unusual.  That’s right ladies, if you happen to geek out about this genre of music, the chances are, you will have no problem at intermission making your way seamlessly and without waiting for the ladies’ room.  I even heard two gentlemen, waiting in the hall, speak in much the same way I’ve heard women talk about invading what seems to be an empty men’s room, only to have me come out and give them a friendly ribbing about the Bizzaro World nature of the situation.

Back in the theatre signs were hung at the front of the stage reminding people that photographs and recordings during the performance would not be tolerated, only after the show.  And they were serious.  Towards the end of the show I watched a man two or three rows from the front orchestra section get escorted out of the space for such an offense.  I can also see and understand the logic of the “request.”

People do not enjoy live performances in the same way they used to even 10 years ago.  Taking pictures or videos or texting friends during a show is second nature for a lot of people, but it takes away from the experience: causes audience members to be less present in the moment, surrounded by the music.  You need to have full attention for the musical masterpieces King Crimson performs.  I can almost imagine them playing before classical audiences at the Met, just 150 miles south.

Opening the second set, King Crimson played “Indiscipline,” a song which Jakko sang more than spoke, from what I remember of Adrian Belew’s studio version.  They also put an interesting spin on the song as they built up and then broke into what I can best describe as a pop song sound, which ultimately ended as a smooth jazz song.  “Circkus” was next and it reminds me of the newish genre of bands, which fall under the freak folk/ dark folk umbrella of music, which play off of the sounds of accordions, wind instruments, and the something not quite right about the carnival/freak show vibe or perhaps those bands owe something to King Crimson and this song.

In my notes from the evening I wrote “total balls,” which may perhaps be the best description I could come up with for such a twisted-sounding song. “Lark’s Tongue in Aspic” was perhaps the highlight of my evening.  It is by far my favorite album and with the three drummers working in sync with one another, it was a dream come true.


All of the performers were smartly dressed in black suits of one nature or another and the stage was back lit a royal blue the whole evening, nothing too eye-catching or bright.  “Starless” came next and true to a performance of this caliber, it blew the audience away.  True to the name of the album the song is off of, the backlight turned to a blood red, giving the band a demonic and desolate sheen against their black suits.  The second set ended with “21st Century Schizoid Man” which started out strong like the studio version, but with the help of Collins, took a left turn and began sounding like a Charlie Parker bebop tune. 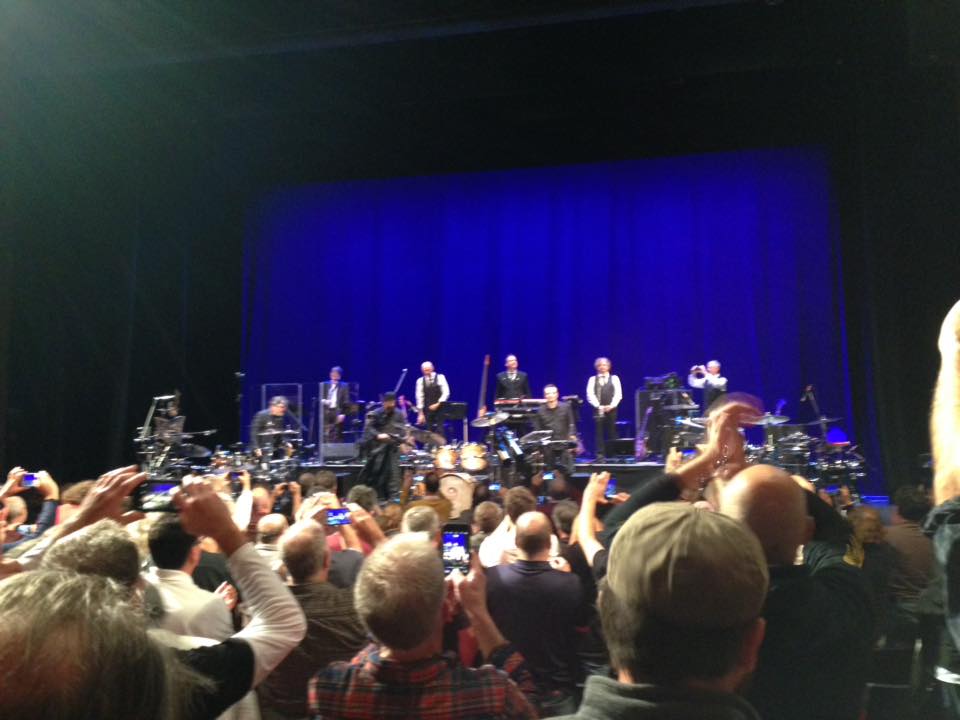 Finally the encore, “Easy Money,” played and suddenly the musical journey was done and the cameras in the audience and on stage came out.  The warmth and joy and collegial atmosphere of the evening was solidified and at one point Jakszyk gave Harrison bunny ears.  For a band who takes their music seriously, they do have a comfortable and playful air with one another.   At a time when it seems like all the great musical heroes of the 70s and 80s are leaving us for the great gig in the sky, my seeing King Crimson was a dream come true.  I love listening and dancing to all types of music, but I’m a whore for prog rock and King Crimson makes progressive rock what it is.