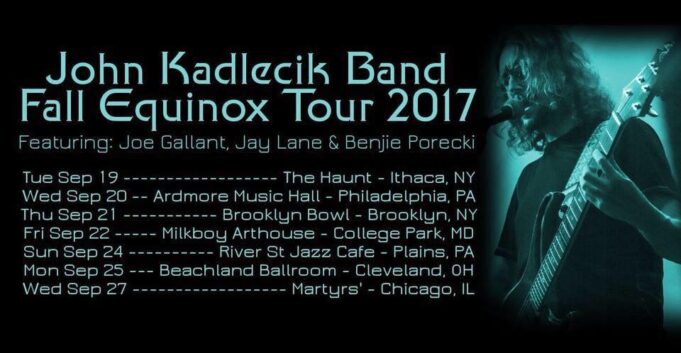 Since first hitting the stage of the River Street Jazz Café in Plains, Pennsylvania a few years ago, John Kadlecik has continued to evolve. It’s more than just his songbook that has grown too. Since his debut, Kadlecik has utilized various lineups when touring across the country. For his stop at the venue this past Sunday, Kadlecik brought another powerhouse outfit for a fun night of cover songs, Kadlecik originals and the Grateful Dead songs that have come to be synonymous with his playing.

Backed by keyboardist Benji Poreckie, bassist Joe Gallant and formidable drum machine Jay Lane, the John Kadlecik Band kicked off the night with the bluesy “Cleaning Windows.” Poreckie was an early standout as his lavish keyboard fills lead the song to exploratory realms. The slower “The Hanging of John Collins” brought about some beautiful improv from Kadlecik, whose normal tone and guitar work provide an eerily similarity to that of the late Jerry Garcia.

The first Dead cut of the evening, the Phil Lesh staple “Unbroken Chain,” proved to be one of the better jams of the evening, as the middle coda allowed Lane to showcase how technical and precise he can be behind the drum kit. While Lane might best be recognized as a long term member of Bob Weir’s RatDog, he has played with numerous musicians outside of the Dead spectrum including an incarnation of Primus. Throughout its existence, the music of RatDog gradually slowed down to become a jazzy/lounge type feel, which may not be the most energetic music for someone who played with the loud funk-metal of Primus.

As was evident on Sunday, the John Kadlecik Band allows Lane the freedom to bring back the funky licks he has done for much of his career. It might take a show outside of the RatDog world to fully grasp, but Lane is one of the best drummers in the jam scene and can give any song new life by adding his own touch to the music. A spot on rendition of the Dead’s “They Love Each Other” had a nice jam which featured some nice interplay between Kadlecik and Poreckie. For as much as Kadlecik likes adding his own twist to the Dead material – listen to any of his projects run through a “Sugaree” for example – it’s surprising that he doesn’t do the faster version of “They Love Each Other” that the Dead did in early 1973, or a completely reworked version of his own.

A song Kadlecik worked on with Greg Anton which features lyrics by Dead lyricist Robert Hunter, the slower “American Spring” lead into a bluesy “It’s Alright,” before the set ended with the Jerry Garcia staple “My Sisters and Brothers.”

An upbeat version of the John Lennon track “Nobody Told Me” kicked off set two, and had one of the best jams of the evening as the four piece took the song on an exploratory journey. Following a drawn out “Sister Smiles,” Kadlecik introduced a song as being one that was written by Phil Lesh for Garcia to sing on the “Terrapin Station” album, but never made the cut, the spacey “Equinox.” It was certainly a nice surprise to hear for the first time. Dipping back into the Dead catalogue, the familiar opening chords of “Eyes of the World” elicited applause from the adoring crowd. Once again, Poreckie lead the way with tight keyboard work while Gallant held down the low end giving Lane freedom to go off on the percussion.

A slower “She Divines Water” meshed perfectly into a jazzy 10 minute jam before the instantly recognizable beginning to “Dark Star” took over. Rather than milk the song for 20 minutes and risk losing the attention of the crowd, Kadlecik delivered a lively 7 minute version of the psychedelic juggernaut. A solid run through “Rising Sun” gave way to a thumping “What’s Become of Mary” which brought the set proper to a close. Before the encore, Lane told the crowd that earlier in the night, Weir called him to say hello, but then admitted that he actually “butt-dialed” Lane by accident, which brought about hearty laughter from everyone in the crowd.

With a good mood filling the room, Kadlecik broke into the opening verse of the Bob Dylan nugget “When I Paint My Masterpiece,” which was reworked into a faster rendition, complete with a throwback to Lane’s RatDog days with the drummer excitedly backing up Kadlecik’s vocals on the songs ending. Whenever Kadlecik goes out on the road, he always has a superb band behind him. Whether it be with the Golden Gate Wingmen or his own band, the music will always be top notch and will undoubtedly take on a life of its own. After Sunday’s show, the next tour can’t come soon enough. Editor’s Note:  Also that night was MiZ playing a supporting set. Full set audio by Keith Litzenberger: