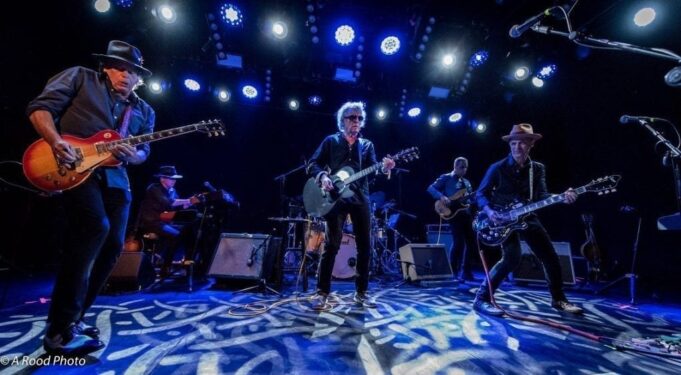 Ian Hunter & The Rant Band
Teragram Ballroom  LA, CA
September 12 2017
Story and photos by Stevo Rood
To submit a review or story for consideration hit us at [email protected]
Check out the Live Music News and Review.com Facebook page for updates and announcements.
Check out the full gallery of photos by Stevo Rood of this show here.
Tuesday night, the ‘spry’ 78 year-old Ian Hunter and the Rant Band returned to Los Angeles for an evening at the Teragram Ballroom. It’s been almost 3 years since he last graced our city with his memorable voice and hits like “Once Bitten, Twice Shy,” “Just Another Night,” and “All the Way to Memphis” (which was part of his encore set). As this was my first time seeing Mr. Hunter live, it was educational and fantastic spending time with the die-hard fans and hearing stories of the past shows they’ve attend going back to the 70s!

Kicking off the show with ‘The Moon Upstairs’ got the room warmed up but a small technical issue with Ian’s guitar caused a slight pause and guitar change before diving into “Once Bitten” which featured some nice guitar solo work by Jim Mastro and Mark Bosch.  The band performed a handful of songs from Ian’s latest album, Fingers Crossed and included “Morpheus,” “Dandy,” “Ghosts,” and the self-titled song “Fingers Crossed.”  Ian also let the audience know that he was re-releasing his 1974 book, Diary of a Rock ‘N’ Roll Star, which has been out of print for many years. Over the course of the 90+ minute show, the audience witnessed Ian’s talent between guitar, keyboard and harmonica on other songs such as “All American Boy,” ‘The Truth, Whole Truth…” and “(Give Me Back My) Wings.” It was obvious to everyone that he is still sharp as ever and shows no sign of slowing down!

Being in Los Angeles, you never know if a special guest will come out on stage and perform with an artist. Well, on this night (and the next in San Juan Capistrano) we were greeted with none other than Mr. Johnny Depp on guitar. He first joined the band on ‘Bastard’ and Lou Reed’s ‘Sweet Jane’.  He then came out one last time during the encore for Mott the Hoople’s classic “All the Young Dudes” which also included Scott McCaughey from the Young Fresh Fellows on keyboard. (Scott was the opening act.)

Ian Hunter and the Rant Band 2017 West Coast tour included San Francisco, Los Angeles and San Juan Capistrano. They are next off to Germany for an extended tour.

We wish him well and thank you for visiting California! See you next time!
The actual set list (which differed from the one on stage): Thanks to Brian and Anni for the correct information!
Check out the full gallery of photos by Stevo Rood of this show here.
SET LIST

Encore:   All The Way From Memphis

To submit a review or story for consideration hit us at [email protected]
Check out the Live Music News and Review.com Facebook page for updates and announcements. Check out the full gallery of photos by Stevo Rood of this show here.