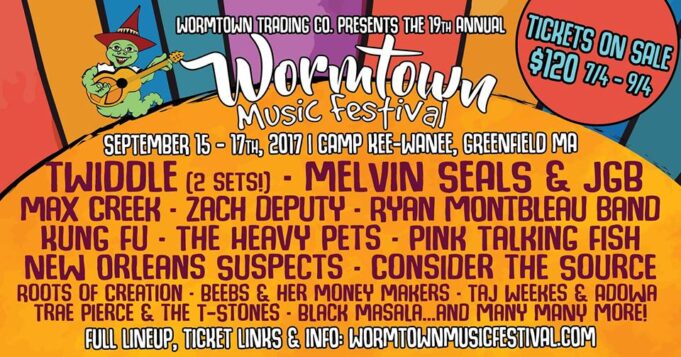 The early bird scene at Wormtown is always fun.  The truly devoted and committed come as early as possible and stake their campgrounds in the woods and show why they are truly ravenous for music and the Worm vibe.  I got in around dinner time, before it was dark and settled into what would be my home base for the weekend, the Old 78 Clothing booth.  I greeted my compatriots for the weekend, saw some friends walking by, got some sustenance and prepared for an evening for fine tunes. The two cabins are the only stages for the early Worms, and up first was Creamery Station in one and Bearly Dead in the other.  I’ve seen Creamery open for Max Creek a few times and they seem to be really hitting the scene hard.  Their set was excellent, an earthy jam band vibe that leans more toward the band and JGB than the Dead or Phish.  I’m always intrigued by the multi-generational nature of their band, with members in age groups that seem to span 25-30 years between them.  They get better with every show and I got a real Levon / Garth / Jerry / Dylan feeling from their originals and covers. I did get to wander a bit over to Bearly Dead who were in the other cabin.  They are the latest Dead tribute to pop into the New England scene.

They have a varying membership base on stage.  I enjoyed their Dylan themed set at Jerry Jam.  I wasn’t able to really pick up on the theme they were using to string together their set list on this night, but the tunes sounded good and the vibe was happy. Up next in the cabin after Creamery was Black Masala.  This is their second festival with the Worms, having played two slots on Strangecreek.  They hail from Washington DC and their sound is an amalgam of influences from New Orleans funk to an ethnic slurry that accesses elements of Gypsy, Bangra, Roma, Balkan and everywhere in between.  This time they had an extra player in a lead guitar player and the band was super energetic.  Consisting of Mike on drum set, two horn players, two guitarists, a bass player and Kristen on vocals they stirred the thirsty crowd into a frenzy.  Their set was a blistering mix of mostly originals with a couple of covers thrown in to keep the crowd attuned. It seemed like they were done, but the crowd was hungry for more even after nearly two hours.  In chatting with them earlier in the booth I had a chance to talk to them about music and I was surprised when they asked me to sit in for their take on the Buddy Holly / Grateful Dead classic Not Fade Away.  Kristen and I sang together for about 1 minute in the booth to settle on the vocal harmonies and the plan was made.  So when the telltale drum beat began, I jumped up, grabbed a guitar from Duff, nodded at Chris Lee, their new guitarist, and away we went.  The crowd’s energy jumped up and we were off-

I was super stoked to get the nod for a ripping guitar solo, too.  I ran through some of my riffs, and noticed that Chris Lee was really supporting my runs- adding in Dicky and Duane riffs over and above me at every turn.  Mike on drums picked up on the vibe, and while this may all be in my head, it was off into the stratosphere we went.  Smiles were splitting the faces of everyone in front of me and before I knew it we were back to the singing.  The band had no troubles peaking and suddenly it was over.  MAN- what a rush. From there I hung out with the players for a few minutes, and then wandered over to the next cabin.  I hit record on my Tascam, and let it roll as I was walking over to catch the back half of Start Making Sense’s set.  SMS has become the #1 Talking Heads tribute in the USA, and their first late night appearance at Wormtown was everything I hoped it would be.  I had seen their Worm premiere back about three years ago on a Sunday afternoon, and I just knew that the Worms would go crazy for them in a cabin. https://www.facebook.com/ken.lind.1/videos/10211390124494223/ Well, I was right-  the cabin was totally packed, especially for a THU night.  The band was in full force.  The Braun brothers on drums and vocals (Jesse and Jon respectively.)  Jenny Founds was in her position as supporting singer.  There were some other players on the other instruments.  Mike Davidson from Insidious Rays was on the bass and holding it down.  Brian Davis was on lead guitar and I had seen him with the band a few other times in the past.  There was someone new on percussion (Eric) and keyboards (Ryan), and they each brought their own particular energy to the band. The part of the show that I caught included a stellar set list:  Born Under Punches, What a Day it Was, This Must be the Band, Nothing But Flowers, Once in a Lifetime, Burning Down the House, Take Me to the River, and the final song, Cross Eyed and Painless. The band clearly had a great time and thanked everyone from the crowd to the promoters and all of the workers, to the Talking Heads themselves.  I don’t always enjoy tribute bands, but these guys are top notch.  I’ve seen them at least a dozen times already, and each time they show why they are as good as it gets on this music. Somehow I ended up raging until after four in the morning.  How did that happen?