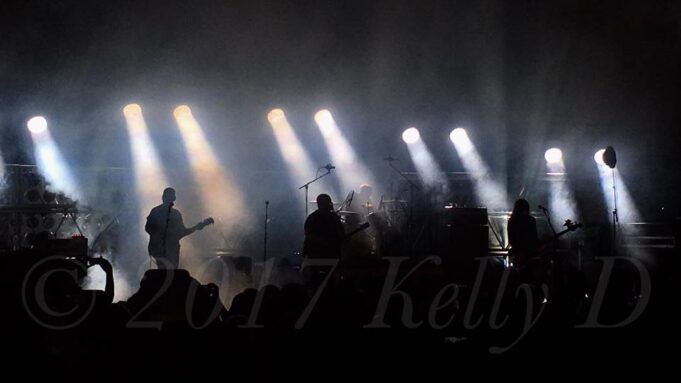 I’m not ashamed to admit the first time I heard the Pixies was at the end of Fight Club. Like many formative moments in my youth, the anarchist image of skyscrapers imploding to the tune of “Where Is My Mind??” is etched into my brain meats. In the 15+ years since, I’ve discovered their other songs and have come to dig their influential blend of punk, surf rock, and catchy melodies. I’d never had the chance to see them, though, till I saw that they were playing a “hometown” show in Northampton, MA last week.

That brings me to another point about the Pixies: their humble origins lie in Amherst, MA, in my beloved Western Massachusetts. Guitarist Joey Santiago and lead singer Black Francis (then known as Charles Kittredge IV) ended up being neighbors in a dorm at UMass Amherst and bonded over a mutual love of music and began jamming together. After dropping out of college and moving to California, they formed the band now known as Pixies, with drummer David Lovering and bassist Kim Deal.

The current lineup, however, features Argentine bassist Paz Lenchantin replacing Deal and HER replacement, Kim Shattuck. This was the source of consternation to some of my pals who also attended the show, but since I had never seen the original lineup it was hard to miss something I’d never experienced in the first place.

The show took place at John M. Greene Hall on the Smith College campus. Smith is my alma mater (class of 2010) and I’d only seen one concert there before: Vampire Weekend with Ingrid Michaelson in April 2009. I recalled it being hot and sweaty, with uncomfortable wooden seats, and the Pixies show was no exception. Kind of an odd place for a rock concert, for more than one reason. My companion and I got into the hall and found our seats, mercifully saved by his friend. I had to wait about 10 minutes in line for the restrooms, which was another point of contention- there were only about four commodes per gender available. Not exactly great for a packed house. Opening band Sunflower Bean was onstage by the time I got back to my seat.

They played a whopping 31 songs in their set, packed into two hours. Black Francis, interestingly, didn’t address the audience at all which seemed a bit off-putting but I was too sweaty to care. Some of my friends who also attended mentioned they thought the band was low-energy, but honestly I thought they were great. Slamming power chords, plenty of billowing fog caused by dry ice, screaming vocals- everything I thought the show would have and more.

One of my favorite parts of the show: Francis failing to produce the famous whistle during the refrain to “La-La Love You,” giving up entirely, and blowing a raspberry into the mic. This made Lovering, who sings lead on that particular tune, break into laughter all while still singing and playing drums at the same time. Multitasker! Joey Santiago kicked ass, too, showing off his technical skills by messing around with the plug-in to his amp to produce distortion and charging the guitar at us like a machine gun, or “techno-phallus,” as one scholar once put it. I also thought Lenchantin did a fine job reproducing Kim Deal’s original bass work and marveled that she was wearing a long-sleeved shirt onstage. Did I mention it was a bit stuffy in there? The encore of the evening was “Into the White,” which they played after the special effects team went hog wild with the dry ice in a cute visual joke. After a group bow, the fog machines poured their plumes onto the members until they completely disappeared from sight. Then they launched into the last song of the evening, with Lenchantin on lead vocals. The song was quite fitting, as well- this was the second night of their tour and they’ll be going full bore till December.

This reviewer here was pleased with her first Pixies experience but the venue left me wanting. Several attendees pointed out that there was no re-entry despite a $50 ticket to see the show and very little in the ways of amenities and restrooms. I hope they change that policy (paper bracelets, perhaps?) when Modest Mouse comes around in a few weeks.