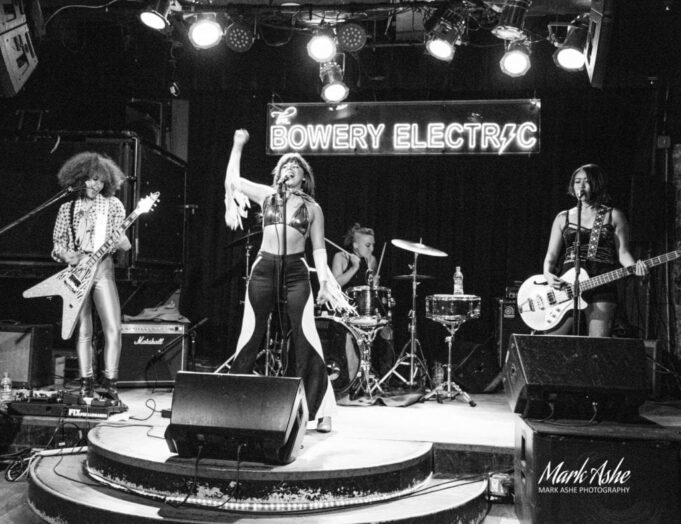 To submit a review or story for consideration hit us at [email protected]
Check out the Live Music News and Review.com Facebook page for updates and announcements. The Lower East Side was a celebration of all things glam. No, not Kendall Jenner mobbed by the paparazzi outside the Bowery Hotel, but instead, a couple doors down, the intimate
Bowery Electric was a firestorm of girls, glitter, and glam. Glam Skanks, a brilliant all­‐female band from Los Angeles, played an intimate solo show, but played their hearts out as if they were playing an arena (again). They ripped through their set like sassy, shimmering superstars. This foursome of loud and libidinous ladies mean business. They opened the set with “G.L.A.M.”, a bold anthem declaring that the band are “the girls that your parents hate” and “Tube Tops”, a punch-­you‐in‐the-­face rant that pulled the crowd closer to the stage like steel to Glam Skanks magnets. “Fuck Off”, an homage to The Ronettes “Be My Baby”, might possibly be the best new break-­‐up song. Check out the full gallery of photos by Mark Ashe here. “I Want It Now”, a ball-­‐busting kick in the head, and “Karma” the story of a “skank in heels” coming back to get “revenge on an old, old lover,” were presented with an energetic force. It was clear to the audience that Glam Skanks deliver more than great songs and masterful musicianship.

On her knees, squirming and writhing like a possessed rock goddess, vocalist Ali Cat was flanked by guitarist Veronica Volume, who beat her custom, purple-­‐glitter Baratto guitar with her fist, and bassist Millie, who ripped through the scene with her gold-­‐glitter Duesenberg bass as if it were a four-­‐stringed chainsaw. Behind it all, drummer Cassie Jalilie beat her custom-­‐painted drums with frenetic, rock-­‐solid skill (Think Travis Barker with glitter eye shadow). Together, they made it look easy. The anthem “Bad Bitch” got everyone pumped and “Radio Blues” had the entire room. “Glitter City”, the title track from their freshman release, is more a state­‐of-­mind than a place, where dreams come true and glitter rains down alongside feather boa lightning bolts.
The bad bitches finished the set with “High Wasted” a raw, surf‐punk knockout of a song. Halfway through, the band broke into a tribal percussion jam that brought the show to an end with a bang. Glam Skanks have spent the entire year on tour supporting Adam Ant, the king of the wild frontier himself, throughout North America and the UK including a performance in London at the historic Royal Albert Hall, the Carnegie Hall of the UK. They are as professional as any seasoned rock outfit and are having a great time cock-­‐rocking better than most guys. The result is an audience consumed by their energy, moved by their passion, and making their way to meet the band after the show. Glam Skanks take no prisoners.