We are getting reports from Montage Mountain in Scranton PA from Peach Festival.  We will update this page as we get more stories and photos.

Good job shuttling people in. Hardly any wait for the school buses that brought us from the offsite parking to the festival. Unlike last year, when it was 98° when we checked in, the weather was lovely, sunny but not too warm. Hopefully, the thunderstorms that shortened a few sets last year won’t reappear. We went through two bag checks that were cursory at best.

We enjoyed the set by Cabinet, with their jam band rock Bluegrass music, featuring americana instrumentation (mandolin, banjo, acoustic guitar, stand up bass, and rhythm section). One highlight was the Dead’s rarity “Easy Wind”.  The sun sank slowly behind the second stage as they played.

We moved from second stage to main stage for the headliner at 830 which was Joe Russo’s Almost Dead.  They  opened with Alligator > Scarlet > Stranger  which clocked in at 35 minutes. Ten minutes into it, my tour buddy Eddie turned to me and said “These guys came to play!” The set included an upbeat version of “the Eleven” and finished with a 15 minute appropriately – themed Fire on the Mountain. The first set lasted about 75 minutes, followed by a 45 min break.

They opened set two with a 15+ minute Let it Grow slowly into Jack Straw.  Then an upbeat Terrapin Station era Dancing in the Streets. Franklin’s Tower into Morning Dew. The band sses slow tempo low key deconstruction of a song’s jam to segue into the next song. Joe Russo sits literally and spiritually at the center of it all, with his relentlessly driving power drumming that propels every song to the next levels. This was a five song set over 75 minutes long, with the encore coming out as Samson and Delialah. These guys are at the top of their game, and among the best Dead cover bands out there.  They are always worth checking out.

We worked our way back to the second stage for a midnight show by Dopapod Orchestra. We weren’t quite sure what to make of this band. They occupy a little-explored territory in the psychedelic valley that bridges horn-driven jam bands with prog rock. It was an enjoyable set, but one that I couldn’t quite figure out. I fell asleep in my tent as their set continued on into the night.

This was a great first day at Peach: the weather was perfect, the ground  dry, the staff friendly, the hassles minimal, the water park filtration system keeping up, and most importantly a lot of scorching hot music among friends.

Power outage on the mountain shut down the water park and delayed the KW set on the main stage. Power was out for about two hours so they switched to acoustic sets on the main stage and kept to the schedule.

That part of Pennsylvania is known for some mighty summer storms, and this festival in particular has had experience dealing with this in the past.  Assuredly the good folks running Peach will get a grip on the situation here quickly, and nevertheless there has been music flowing. As of 3:22 PM the power has been restored!! I headed to second stage which was running on generators. Went up close to see Steve Kimock which also featured his son John on drums and Jeff Chlementi on keys. The set was okay but honestly a bit disappointing to me. Very mellow and lacking energy, not what I’m looking for in a festival set. Deserving of their time spot at 115 on the second stage. God Street Wine followed and were similarly okay, nothing bad but nothing grabbed me.

DSO: started one minute early at 714…a good sign! They played one continuous set that lasted about 2 hours. I’m pretty sure it was no actual set but rather an amalgam of material from 1969:

Two hours of solid music. I noticed that, to this point, the peach festival had really been focused on Grateful Dead music, rather than Allman Brothers band music. The mountain jam that DSO tossed in there was the first notice that things were starting to change.

It started to rain around 4PM and pretty much alternated between raining and pouring (sometimes torrentially) until very late. Everything got muddy pretty quickly.

I knew nothing about My Morning Jacket going into their set, save for the one single I was familiar with from the radio. I was pleasantly surprised. These guys were real professionals, very tight and polished and deserving of headliner status. The music drifted somewhere between U2 Arena rock and tight Phish jam style with the musical-crescendo-orgasm near the end of each song. They radiated a professional rockstar glow that is absent from most of the bands in our scene (who tend to fall on the spectrum somewhere between casual and slovenly – and bless them for it!). The set was fun and upbeat and hard driving and featured Melissa, the first full-blown Allman Brothers cover I had seen at the festival. I would always be happy to see this band.

My morning jacket wrapped up right around midnight. Rather than wait around the main stage for Lettuce featuring Chaka Khan, we walked through the mud and rain, stopping for some late-night veggie burrito dinner, and headed back to our tent to watch Pink Talking Fish Eat a Peach. Their set was fun, alternating between covers of Pink Floyd, the talking heads, Phish, and the Allman Brothers band. I fell asleep in my tent partway through their two hour continuous set, which was fun and entertaining throughout.

We awoke to the typical muddy festival scene and are looking forward to a full day of ABB-themed music. 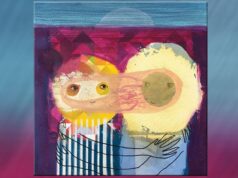 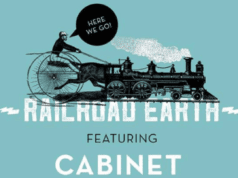 Railroad Earth and Cabinet Team Up for Double Header on August 31st, 2019