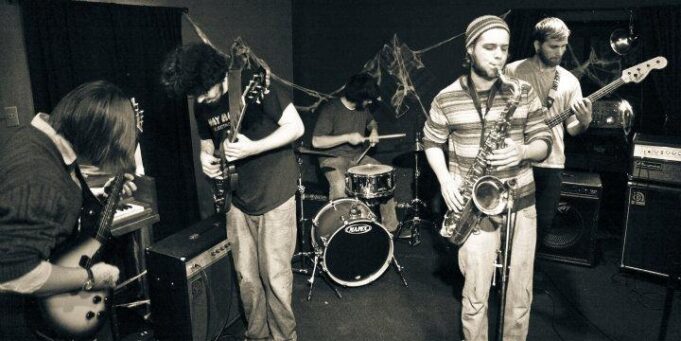 What if I told you the illegitimate newborn child of Lark’s Tongues in Aspic and Romantic Warrior, wiped off then whisked away in the middle of a terrible and stormy night and raised by Astronomy Domine and Devil Take the Hindmost, was now touring the Happy Valley as the four-piece band Hot Dirt? You would be right to be skeptical, dear reader, but you’d be wrong to dismiss my claim. They are here, and you better brace yourself.

This was the opening act of the three-band New Year’s line-up at the Root Cellar in Greenfield.

The clashing rhythms and angular transitions put together by Brittany Brideau (Guitar), Jeffrey Gilmartin (Guitar), Zachary Scoble (Bass) and Joshua Daniel (Drums), are the stuff of dreams for this writer and any fan of King Crimson and other 1970’s prog-rock, now all but extinct from the touring stages.

Acid jazz-like dysfunction suddenly coalescing into a grunge throb, even at this early point in the evening, had the couple dozen people on the dance floor swaying, bouncing, or moshing at various points in the set. The band is tight, and clearly enjoy what they’re doing.

Speaking to the couple standing next to us at the Cellar, we soon found out they were the parents of band leader and vocalist Brittany. As it turns out, Brittany’s mom was raised listening to Crimson as each of their albums came out, and she made sure to expose her daughter to the band from an early age, lo, those many years later. We are not wrong about the band’s lineage. It’s in her blood.

Next in the New Year’s line-up was Carinae, the Phish-Doors -early-Floyd-like psychedelic band with the Lou Reed-like vocals making the local circuit. This writer saw them open for Bella’s Bartok at the Arts Block last year, and we couldn’t look away. At some point we thought we were tripping, though we’d only had an IPA. They were a perfect follow-up to Hot Dirt. Apparently they’ve shacked up in the past at those musician residencies we’ve heard about. Coincidence? I wonder.

The pub was beginning to fill up and the floor was half-full as Kasey Greene (piano, guitar, vocals), Calvin Parent (guitar, vocals), Gabe Camarano (drums), Nina Kent (bass) and Gage Lyons (guitar, vocals) pulled them into a single undulating, bouncing mass. I was looking for the lighters aloft when they broke into their anthems, and the smoke machine when the neuro-jams geared on. We laughed. We cried. We drank more Root Cellar Pale Ale.

Third and last up on the stage was Home Body. Now, this writer has never been to a two-person techno-rave event, but WOW. We felt like we were on the set of a cop movie during the scene where the two agents walk through the crowd in slow motion while the crowd-around dances with their hands over their heads to the sound of throbbing bass and female vocals pealing as the colored lights wash over.

This is live, industrial techno. Eric Hnatow was spinning the dials and punching the buttons while Haley Morgan wailed in a very un-Yoko manner. Melody and tone rained down upon the writhing mob on the now-packed dance floor as the slow techno bass glued us all together.

After the reaming we collectively received the last year, this was the way to bring in the new one. With Ginger Libation flutes in hand, we counted down, kissed, sobbed, and grinded our way into 2017 with Home Body.

And, would you believe it, during the night there was a “Shimmer Fort” available for secret liaisons, glittery selfies, or just hanging out in a party booth. Set up by Opertura, there was also a couple tables where they would create a Dreamer Charm for you. We didn’t partake in the charm fun, partially due to the long line of revelers waiting for theirs, but we did see many people so adorned on the floor and at the bar.

It was a night to remember.