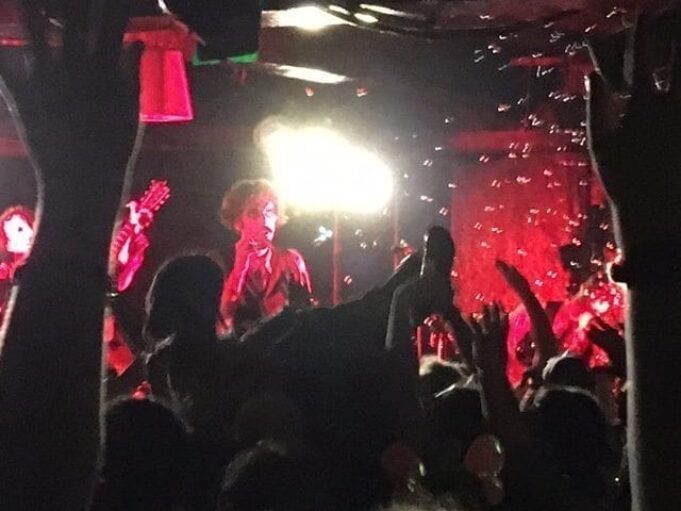 and Gretchen and the Pickpockets

It has been a long while since I went to a show at the Middle East upstairs.  The last time I can recall I think was 2001 when I saw the sold out CD release of Boston buzz band Star Ghost Dog.  It’d been so long that I went to the wrong part of the venue seeking the door.  I eventually found the right spot, we sat down for an affordable and not fancy dinner, and waited for the early show to open.

Gretchen and the Pickpockets opened.  The band  consists of siblings Mike and Gretchen Klempa on bass and lead vocals respectively, plus Ritchie on guitar, drums and a multi-instrumentalist who named Ryan on guitar and trumpet, and Tom on drums.  Their sound is definitely jazz with a variety of specific  elements including what I feel is late 60s early 70s cocktail jazz- like what you might expect to be playing at a dinner party at Bob Newhart’s; Norah Jones inspired vocal jazz, and some definite beatnik era slinkiness.  Present throughout is the band’s desire to inject emotion into that paradigm and they are not afraid to ratchet up the intensity at times.

They had a real good crowd for the early slot on an early show, and they took advantage.  The band has the ability to be both retro and modern, dipping into these older influences and infusing them with a present day enthusiasm that makes it easy to see why they are gaining a following all over New England.

After a short time to change over and get set up, Bella’s Bartok took to the stage.  Fancy Kerrigan started the show leaning as far over the what was then a packed crowd as he could, and started the show at a practical whisper.  The Strange Ones unfolded in his muppet like ‘I’m kidding but I’m not’ vocal for a good two minutes.  And then the band kicked in, and they kicked in hard.  They pack a punch with drums, bass, vocals, horns and stringed instruments.  The energy is abundant, and the creativity is on overdrive.

Most readers of this site have been hearing about Bella’s Bartok for over a year now.  They are turning from Northampton’s favorite band and are well on their way to becoming a regional powerhouse.  They’ve been playing Boston for years, but this was a featured show for sure, headlining the historic Middle East though in the smaller 200 capacity room.  And capacity was reached for sure as the show sold out and the fans were just packed in from stage to the back of the room.

The songs were coming out rapid fire, from 3 minute gems to 8 minute pieces.  Seventeen songs in total including their single, Ramona and Kingmaker’s Ball.  For me I am always excited by seeing elements within a show that I have not seen before and tonight was no different.  This is the first time that I have seen the band with this lineup- Jesse Putnam seems to have departed and has been replaced by Saera who has been playing mostly banjo.  She has the look that is all Bella’s, part sprite, part Adam’s Family gloom, dipped in glitter and seemingly highly caffeinated.

Mid way through the show Bella’s Bartok lent the spotlight to Saera, and she took center stage.  Fancy Kerrigan announced that this was a song that they did not write, and the band vaulted into No Doubt’s Just a Girl.  She delivered it without too much irony, and it strangely fit right into the band’s mix of pop sensibility and creepy creativity.  It’s good to see that energy change and morph with every different song and every different member.

The rest of the night is a blur-  there were Facts with Dan, shirts were removed, Happy Birthday was sung, maybe more than once, sweat flew, and the audience was conquered.  It was somewhat novel to have a full show end by half past ten, and even going back to western MA we were able to make it home not long after midnight.

Bella’s Bartok is playing Northampton for New Year’s Eve and I can’t wait.  They will be joined by The Snazz, Funky Dawgz Brass, and Damn Tall Buildings.  That show is being dubbed the Strange Ones’ Ball and from what they tell me some craziness is scheduled (acrobats?)  I can’t wait, myself.