I caught Soul Monde, whom I’ve never seen before, a little bit after the start of their great opening set, so as I’m running up BSP’s basement stairway I almost thought I had come actually really late and Dopapod had already started-that’s how big the sound was coming from two guys. It’s a combination of Ray Paczkowski laying down bass and key lines over one another, and Russ Lawton thumping away wildly on drums. I realized after a minute of watching Lawton that I could listen to him drum all night long-the way he’s going a mile a minute but with an immaculate, clean style. And the two wind right around together perfectly. The funk they produce is laid back in tone but constantly churning away with energy in mode, and the crowd really couldn’t get enough of it. I can’t say if I’ve seen a happier couple of musicians on stage. When they weren’t beaming down at the gnarly licks pouring out of their own hands, they were beaming smiles towards the really receptive crowd.

I think part of what partially contributes towards to Dopapod’s strength is their blending command of different types of sounds. Opening up with “Present Ghosts > Like A Ball” showed this arena rock sound they definitely have-huge, important riffs and pieces of melody that ring out loud and with a sense of epic. The with “Cure,” and “Bats In The Cave” next come the other portion of their jam creation, the elements of jazz and disco and whatelse that fuels the incredible live improvisation of their material. For the latter song, Soul Monde were invited on stage to join, and they fit right in. While it cruised for awhile in a Monde style, the last portion of it sprang up into a nice peak.

I got a nice bit of luck at this show to get “Freight Train,” as it happ 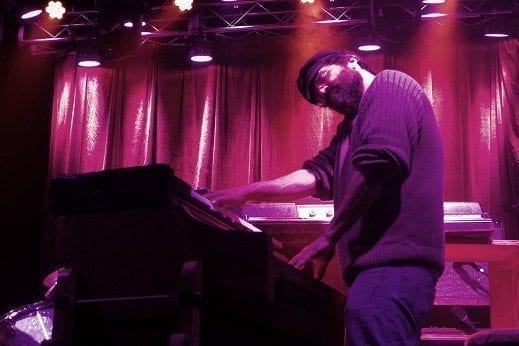 ens to be my favorite original these guys do. However-usually these guys drive this tune off the rails hose-style, but on this night they keyed it back into a more grooved-based jam. I dug it! No complaints for my first version.

Second set of this Kingston show was pretty much just it-a swirling, heady hour of musical love making and experimentation. Some jambands playing tody have mastered the art of the segue ahead of others. Dopapod I think is one of those bands. Every direction they headed into in this second set were punctuated with a crispness in change from all four guys as a band. And all in the middle was a lot of bold exploration that the crowd was never less than stoked for.

Midway through, for example, was a deciding highlight of the night, in “Indian Grits > Trapper Keeper >

Dracular’s Monk,” where a seriously funky air pervaded throughout. Somewhere between Keeper and Monk was the time I scanned the crowd and realize how in motion and flowing everybody in the room was going. The other thing it seems too, is that Rob Compa sporadically, every once in awhile, charges to the front, with either a solo or just lead on the improv happening, and they make for special moments, like on this night. In the middle of this jam somewhere, his guitar oh so briefly took on a twangy tone that was a moment topper.

The segued journey ended in a really strong “Picture in Picture,” which, again, detoured into a different kind of funking out, this time a cool reggae jam-and nothing else could be a cherry on the top but the final Hava Nagila 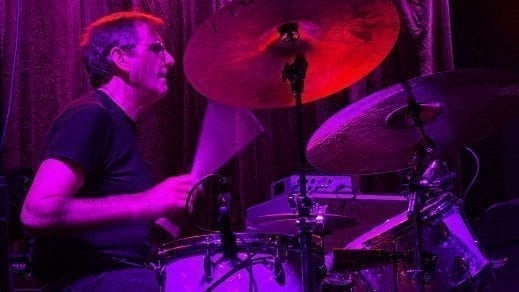 of the night, which here was the biggest one yet and almost more of a jam from the entire band, this time the majority of the crowd kicking their feet and clapping along. Hilarity turned rage. Their debut cover of this tour, Derek and the Dominoes’ “Keep On Growing,” served encore, and the cool part here was the shift in sound that seemed to happen, from their own into one really reminiscent, to me at least, of the Dominoe’s own.