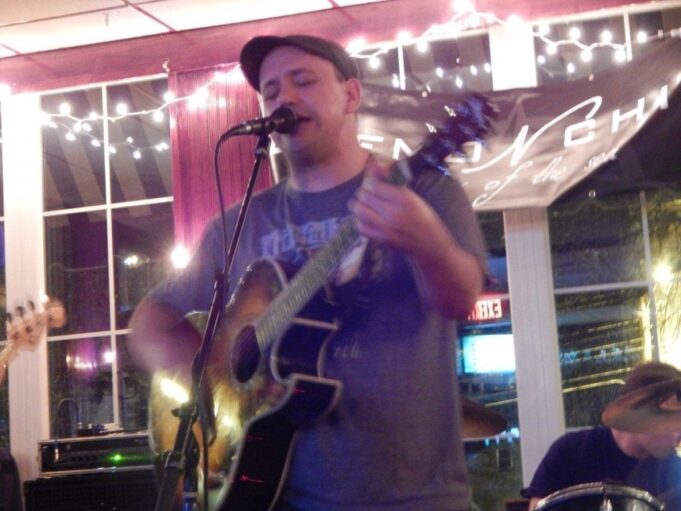 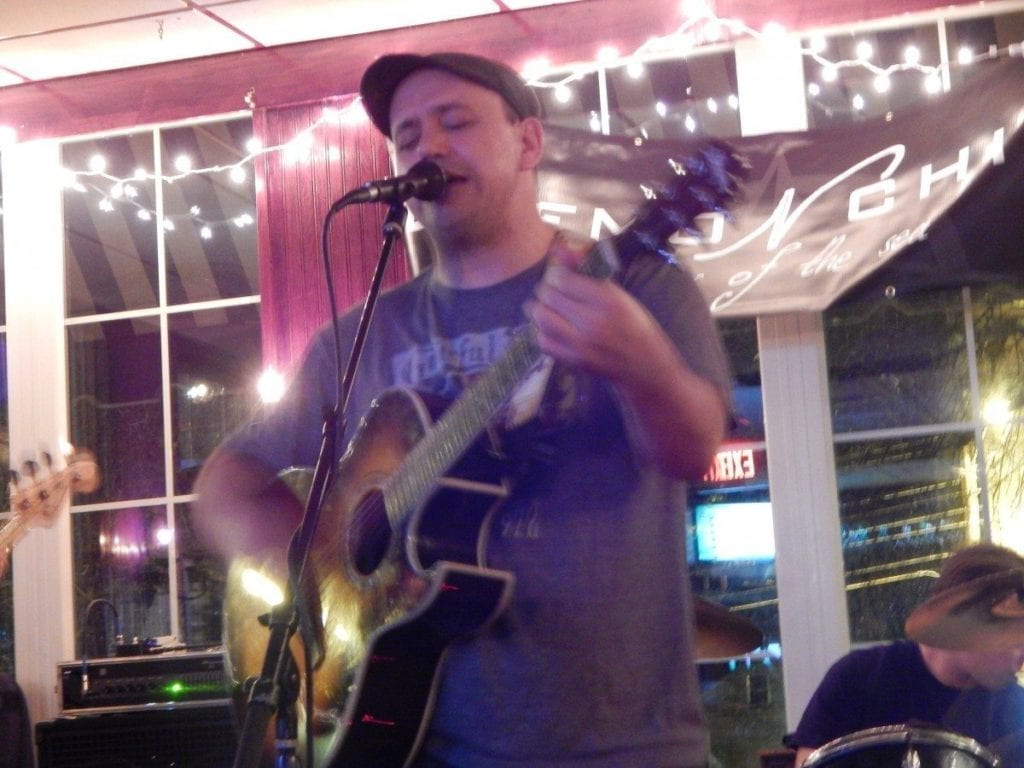 Some mighty tasty music is starting to filter out of the Merrimack Valley again. Its sound wafting out of the industrial cities and mill towns, settling comfortably on the palates of music lovers all over New England. Off to one side of that colossal smorgasbord we like to call the music industry, in an old sizzling cookpot, you’ll find the savory sonances of Daemon Chili. The ragtag, five-piece crew who call the city of Lowell home, will have their first full-length studio album drop on April 8. It is titled Mercy of the Sea and with it comes a string of dates to help push it along. If you’re one of those fanatics who have an insatiable hunger for new material that can stick to your ribs, fatten your passion, and make you sweat, then this band will leave you feeling replete. I was lucky enough to sit down to chat with the band on Friday, February 26 in the quaint setting of Fody’s Tavern in Nashua, NH. From there I received a generous helping of their music and got to see how the songs subsist in a live environment

Now, I use the word “ragtag” unreservedly because these musicians have no specific category to fall under. Their music, while predominantly a mix of rock and blues, goes far beyond the boundaries of that conventional genre. At times you may find it roving freely on the fringe of a jam band vibe, at others you can detect a strong reggae influence. Still, on occasion you can pick up a sort of rockabilly feel. The list goes on. It is all over the proverbial map yet fits so soundly together that it can almost be regarded as its own genre. May I suggest, (playing off a title of one of their songs) good old-fashioned, blue-collared, boot-mill revelry with a rock and roll essence. There’s even a piano ballad placed in the mix, proving that it really is a multidimensional album; flavored nicely with the unique chops of each individual member.

The story of Daemon Chili begins in the 90s amidst the college community of UMass Lowell, but it would be close to 20 years before they started making music together professionally. You could probably even call it the simmering period, the point where they all came together as friends and shared their mutual love for music. As the formative years passed, each went off in their own direction. Both Jay Morretti (lead guitar) and Jay Samiagio (bass) were in a band, CottonMouth. Steve Benson (pedal steel, electric mandolin) began playing bass for the Freelance Bishops. Mike Dion (guitar, harmonica, lead vocals) began mastering his instrument, writing songs, and eventually started a string band dubbed Hot Day at the Zoo.

For ten years HDATZ circled the wagons, playing shows, festivals, and creating a name for themselves. When Dion left the band the name stayed, while the songs that he wrote exited with him. We should all be thankful for that because the songs had bigger potential than just string music. They had sustenance and were itching to be reconstructed.

While in limbo, Dion contemplated his next moves. He already had a collection of songs waiting to be put to new music, but no band. So he called upon Morretti and went from there. They reconnected with Benson through Facebook, picked up drummer, Jay Breen and proceeded as a four-piece. A short time later, after acquiring Samiagio, Daemon Chili had cooked down to the band they are today. While having those former HDATZ songs in his pocket, Dion was still reluctant to use them.

“It was not an easy decision to do those songs,” Dion stated. “They were scheduled to be on the next Hot Day album and when the band split those recordings were just going to go away. We put too much work into them, so the fact that it wasn’t Hot Day at the Zoo on the cover, OK. Again it was a hard decision to make…” Continuing, he said, “One reason I ended up using the songs was because I thought it made a pretty good transition from what my music was to where it is going with the new band and new sound.”

If their first album, Rise Up, showed the emergence of a band hastily trying to push away any similarities of their former bands, then Mercy of the Sea is their rebirth into something completely their own. It has given the band a clean slate, allowing them to venture wherever they please, musically. Recorded in three separate locations, the bulk of it being done at The Ice Box in Lowell, the album took around two years to be completed. To be fair to the rhythm section (Samiagio and Breen) it didn’t take nearly as long to secure their parts.

“For the fundamental tracks, the drums and bass were recorded in one day,” Samiagio explained. “We just went in and did three takes on each tune, starting maybe at 11am and ending about 5 or 6pm. We just hammered them out.” 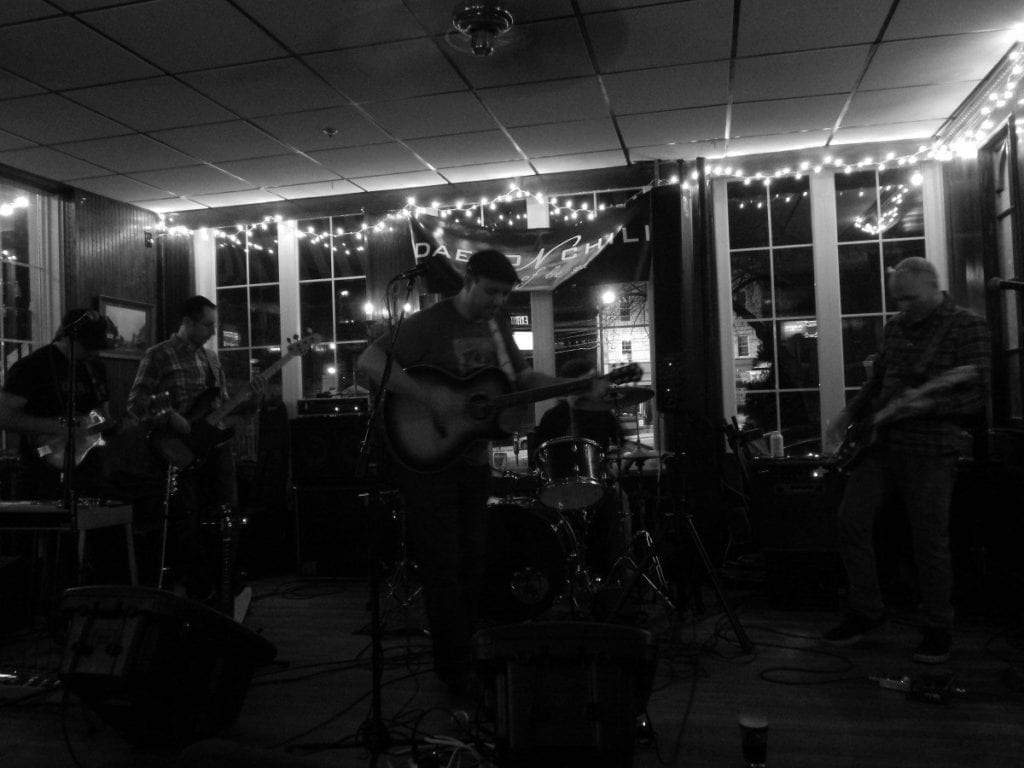 At first listen I was quick to define the album as blues rocks, but as I’ve stated before, that would be vastly inaccurate. “Full of Sin”, the opening track, starts quick and hooks you right in. Right off the bat, with perked ears, you experience Morretti’s crafty guitar work and Dion’s unmistakable bawling. Mix that with the booming vocals of a compelling female backup singer and you’ve got everyone on their feet-a jam lover’s paradise. “Take Sounding” slows it down to a comfortable level, mixing a bit of country into the pot. Benson’s pedal steel is sharp and disciplined and does so much to add depth and character to the song.

When I hit the fourth track, “Lost”, I immediately heard the versatility that Daemon Chili can bring to the table. The song’s familiarity can be credited to the fact that it was once a bluegrass tune. But ever since then it has morphed, quite a few times, ending finally as a definitive reggae tune with a beautiful complimentary horn section. It may sound strange to go from a bluegrass to a reggae number, but believe me, it certainly works. In fact, I consider it to be the version that best suits the song. The horns, headed by Seth Bailin (tenor sax), effectively fill in any gaps and add a little bit of sustenance to the track.

“Devil Women” is a woeful tale of heartbreak and lost love. The bluesy guitar work, well-executed pedal steel, and tingling keys from Nick Heys, is raw, rugged, and a bit uncanny. It slides along soulfully-incorporating two nicely timed solos from Morretti and Benson, as well as the pleasant shriek of Dion’s harmonica-in a way that obtains total authenticity. Being the second longest track on the album, it has peaks and valleys leaving the listener quite satisfied by the end.

“Wicked Blues” is the album’s party track, and it is mind-numbingly intoxicating. Benson commands the pedal steel right away with a scandalous solo that is probably illegal 12 states. He unleashes an unparalleled ferociousness that is sometimes hard to contain. Thankfully he doesn’t have to in Daemon Chili.

“I traditionally get fired from country bands,” Benson said. “So when people ask me what I do, I usually say, ‘If you go see a country band there’ll be a utilities player, steel guitar, dobro, banjo. I do that, but in rock bands. If I play in a country band, I often get let go because I’m too Jimi Hendrix for them.” 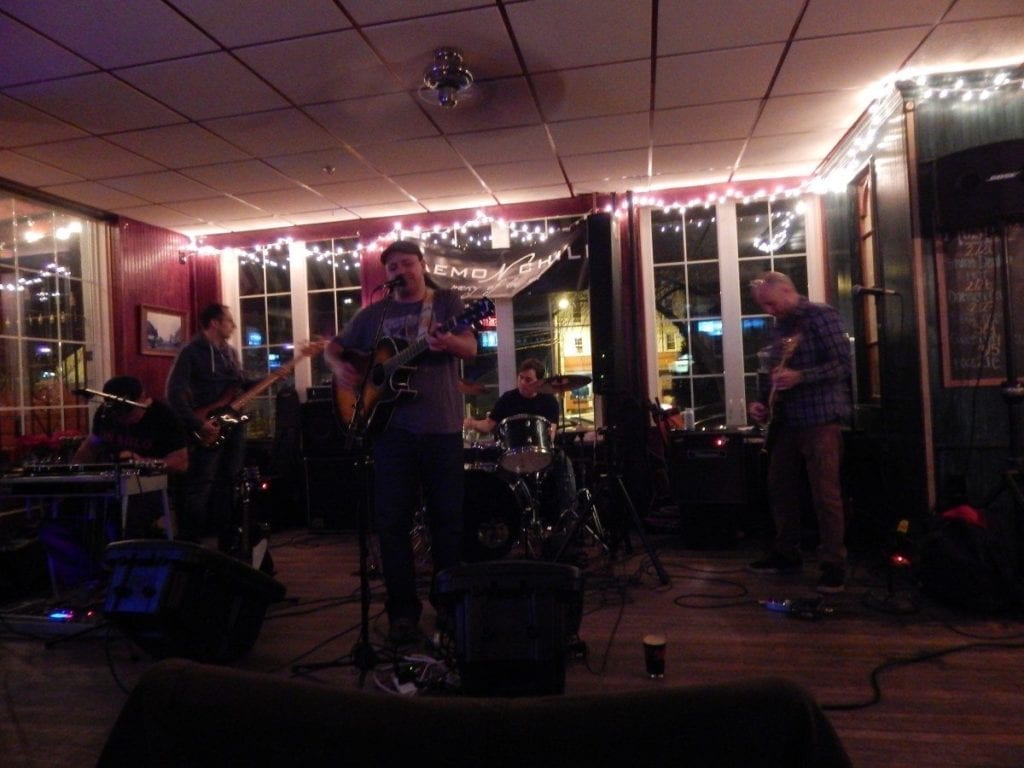 If you ask me, it’s better to have someone who shreds than one who doesn’t. But even though Benson sometimes has to restrain his instinctive urge to let it all fly, his presence in the band is profound. The culmination of Mercy of the Sea sums up the album rather nicely. “April” is a lovely piano ballad that only perpetuates the notion that this band is extremely diverse. Overall, the 11-track album is all meat and potatoes, heart and soul, blood and sweat, to voice all the monotonous clichés that come to mind. It is a grass-fed, free-range type of blues/rock seasoned with a myriad of worldly influence. To see them in a live setting however is really something to behold.

At Fody’s Tavern, while I was expecting a just another routine performance, I was pleasantly shocked to learn that they took a more autoschediastic approach. Without a set list and from the very first notes, I had known that school was in session. It had been close to five months since the last time I caught a Daemon Chili show. That was at Old 78 Farm Fall Festival and my how things have changed. With no definitive set list, the band let loose and had fun with the evening. This made the music even tighter; it let the band follow no stringent rules or timeframe. They kicked it off with the prideful hometown number, “Bootmill Flavor”. A scrumptious opening ditty that surely had me drooling for more by the end. “Lost” presented an even more prominent reggae sound than on the album with the nice pop from Samiagio’s bass. “Lay My Burden Down”, off of Rise Up, led to a string of older numbers including covers of “16 Tons” and Creedence’s “Green River”. The first set ended with the blazing tune, “Wicked Blues”. Both Benson and Morretti went to war with each other, battling for solo supremacy. They contended back and forth between Dion’s confessing verses of guilty pleasures. You couldn’t tell who wanted the crown more. It only reinforced the fact that both men possess some kind of unworldly power when they stand behind their instruments.

With them that night behind the kit, in place of Breen, was Ben Gilsenberg. The youngster has no problem holding his own. They wasted no time bringing the heat in their second set. Opening with “Gypsy Moon”, a jamming, bluesy tune they once again they set a fast pace. I remember “Great Blue Sea”, “Full of Sin”, “7 Deadly Sins”, and “Mercy of the Sea” but the order has since slipped my mind. I do believe there was a heady Grateful Dead cover as well, but I was so caught up in the beer-soaked merriments that my notes had become illegible-squiggly, inky remnants of a night swathed in exceptional music.

I will end here saying that, while there is no evil that lurks deep within the heart of Daemon Chili, their music retains an ultimate savagery that holds your attention ransom. It seeps into your subconscious and hunkers down in a snug little nook in your soul, labeled eternity. Make sure you check them out when they come into town in the coming months.