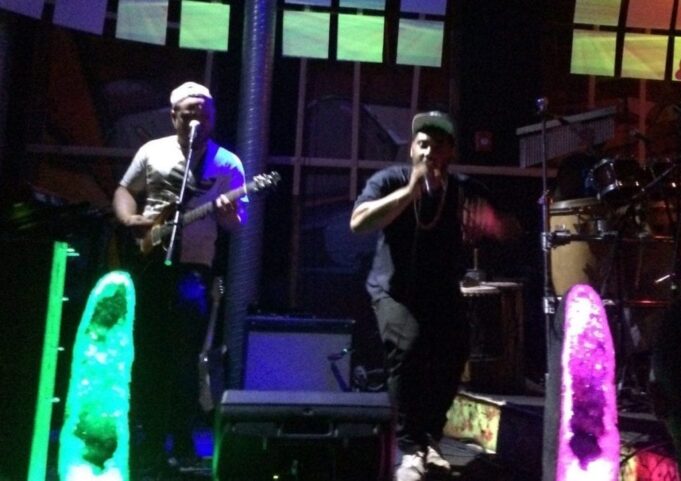 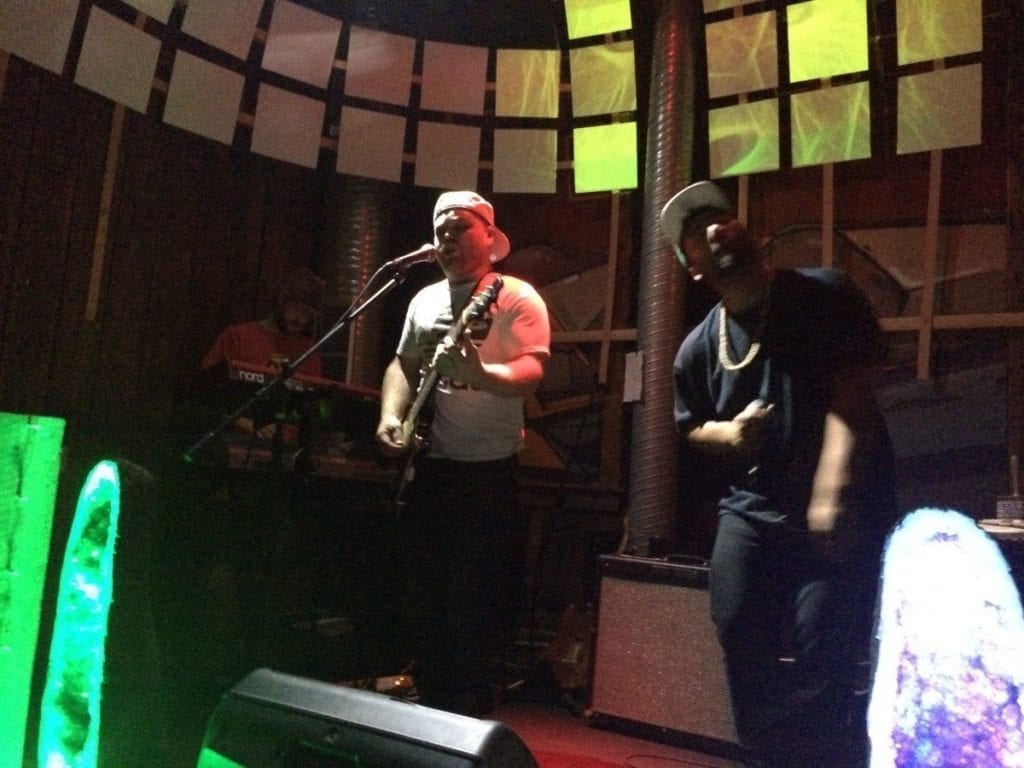 I haven’t seemed to get out much lately, what with having been pregnant and now having infant twins. However, when Rhythm Inc came to town I had to take the chance to slip out for a few hours and catch the show. It was with much anticipation that gathered my sidekick Eve to catch the band at Hinge in Northampton, MA.  Driving through the slightly crisp but pleasantly warm summer country air, with windows down and music blaring, I couldn’t have been in a better mood.  There’s nothing like a new mother let out even for an hour or two- we relish every moment!

We got to Hinge just when the band was doing sound check, so we settled into the lower level and caught up with the bartender. I’ve gotta say, I love this place. I love the feel and the well thought out individual touches, like the cool draft taps made of brass hinges. I don’t even drink beer and I think they are cool.  In the interest of full disclosure, my favorite color is red. And though it’s not like this place is decked out in red velvet or something like that, it has a distinctly carmine sensibility, with brick and brass accents, polished wood and red leather couches on the top floor.  Red being the color of passion, I think that is appropriate, given the evident passion owner Aaron Kater has for his burgeoning business and the local music scene.

Check out the review of Thievery Corporation in California August 7, 2015.

The feel at Hinge is both chill and energizing at the same time.  With a downstairs that enables socializing and and an upstairs made for intense dance sessions, you can have a wide range of experiences here.  I found the crowd to be sociable yet attentive. This is no listening room, yet it isn’t one of those bars where the music is 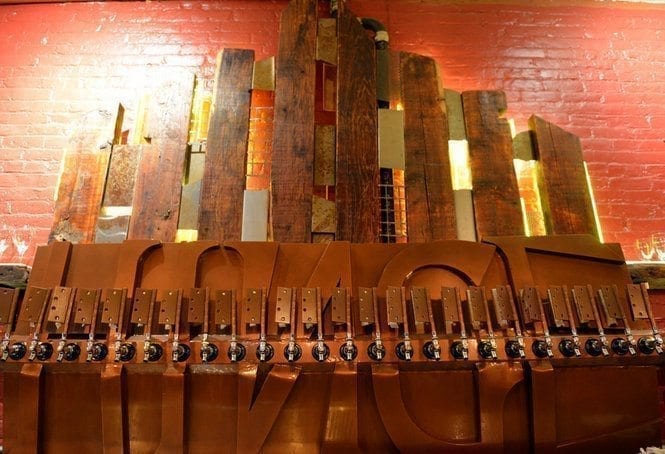 so loud you can’t get a word in edgewise. Neither is it a place where people are so social that the music is just background. No- music is central, with an attention to detail and impeccable sound tech, and that’s why I like Hinge.

The audience was a real cross-section of the local society. I think this was both due to the band and the venue.  Whatever the cause, it was refreshing. All walks of life.  All socio-cultural backgrounds (as far as I could tell from my limited conversations and observations) and, excitingly, a high number of WOMEN!  Now, usually when I go out to see live music in Northampton I am vastly outnumbered.  Now, in my single days this wasn’t so much of an issue I guess, but it has saddened me over the years that some women appear to be missing out on such an amazing music scene.  But not this night!

So enough of my musings- how about the band?  Rhythm Inc is a local reggae, hip hop, funk and dub band.  Wow, that’s a mouthful. Doesn’t it seem like every band these days has about 50 descriptors? But how else would I describe the eclectic mix of influences that are  an evident thread throughout their show, and, indeed, woven into each song?

The group of 7 barely fit on the Hinge stage (which, if you haven’t ever seen it is quite a feat of engineering, perched above the second floor bar and sporting a wire railing so that the audience can see the band without the band simultaneously falling off!).  To the right, over the bar, featured drummer Nate Kielb, who didn’t just keep the beat, but kept my attention too. Bassist Nico D’Amico grooved nearby with rhythm/lead 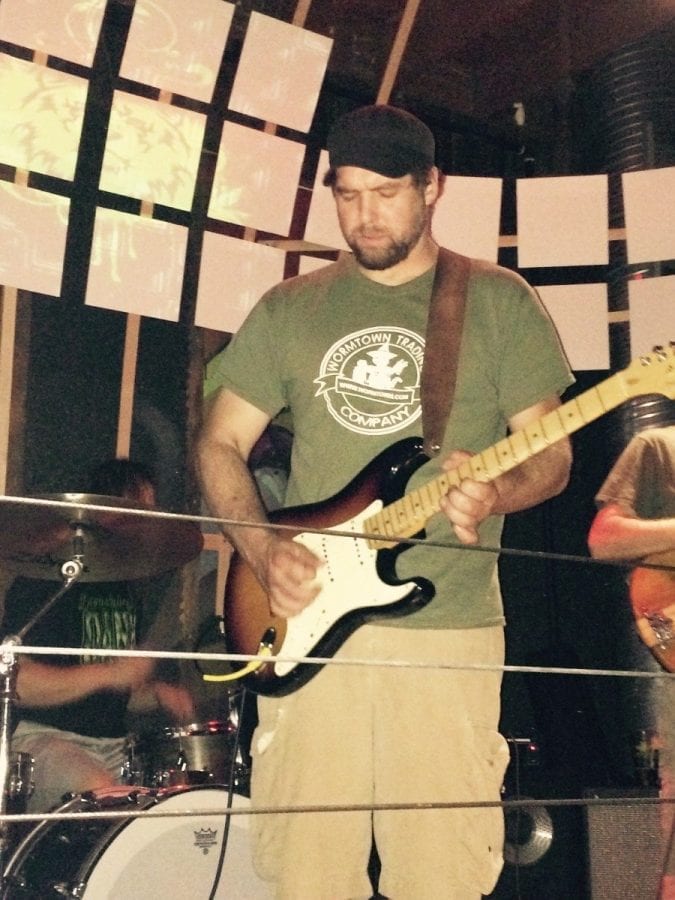 guitarist Brian DiMartino rounding off that end of the stage.  The barrier in the middle of the stage, while visually off-putting, didn’t keep this rhythm section, arguably the backbone of the group, from being in total sync with those on the left side of the stage.  Bridging the two sides was percussionist and sometimes vocalist Jamemurrell Stanley.  We were lucky enough to have him join in with vocalist Giles Stebbins on a few of the songs.  Lead singer and rhythm guitarist Simon White rounded out the vocal section, with Jason Metcalf stepping in on keys, tucked into the back left corner.  Whew! What a crew!

So, in the interest of full disclosure, I’m not a big hip hop or rap fan.  I can appreciate the genre and get into it at times, but it is not, as they say, my usual cup of tea.  HOWEVER, with that said, I’ve gotta say that my experience on Saturday night might have changed that at least a little.  Not that this is a straight hip hop show- not at all. And maybe that’s why I was so engaged. But, more than that, it was the combination of musical and vocal styles that makes this band stand out. They seemlessly blend their talents and passions, one minute Simon, Giles and Jamemurrel rapping and waving their hands over their heads in unison in what I might consider “hip hop fashion,” to the next minute Brian playing bluesy guitar solos that felt more like they belonged in a rock concert, but somehow fit perfectly.

The song Another Music Man caught my attention.  Eminently danceable, this song features Simon’s and Giles’ easy and energetic back and forth, with an air of intimate, passionate conversation about it. The rapping is interrupted by Brian DiMartino’s rockin’ wah-wah infused guitar solo.   He’s got a free-flowing style that almost masks what is actually quite skillful precision playing.

My favorite song of the evening was Solstice. Unfortunately, my camera memory was used up at that point and I was unable to capture it.  But picture this.  Based on a traditional African beat called “Dansa,” the song, according to guitarist Brian DiMartino, is somewhat of a tribute to the late drummer from The Alchemystics Demse Zullo, who died in Spring 2015 and who had co-founded a unique drum circle at the StrangeCreek Campout with Brian years ago.  Brian told me about the song:

“The Song “Solstice” is based on the rhythm “Dansa” which was probably my favorite rhythm to play during the festival drum circles with Demse. I found a guitar part that fell into cadence with the Djun Djun’s rhythm and presented it to our percussionist Jamemurrell Stanley, who also is a master Djembe and Djun Djun player. He immediately understood where I was coming from and helped craft the song with Simon White, who listened to it for about a minute and then came up with those amazing vocal melodies almost immediately. The rest of us became so immersed in the song that we found ourselves just grooving on it for 20 minutes at a time at rehearsals because we enjoyed the energy and feeling it gave us. As you could see, the song is based more on the powerful percussive abilities of Nate Kelb and Jamemurrell Stanley and features a thunderous drum solo at the end where they work 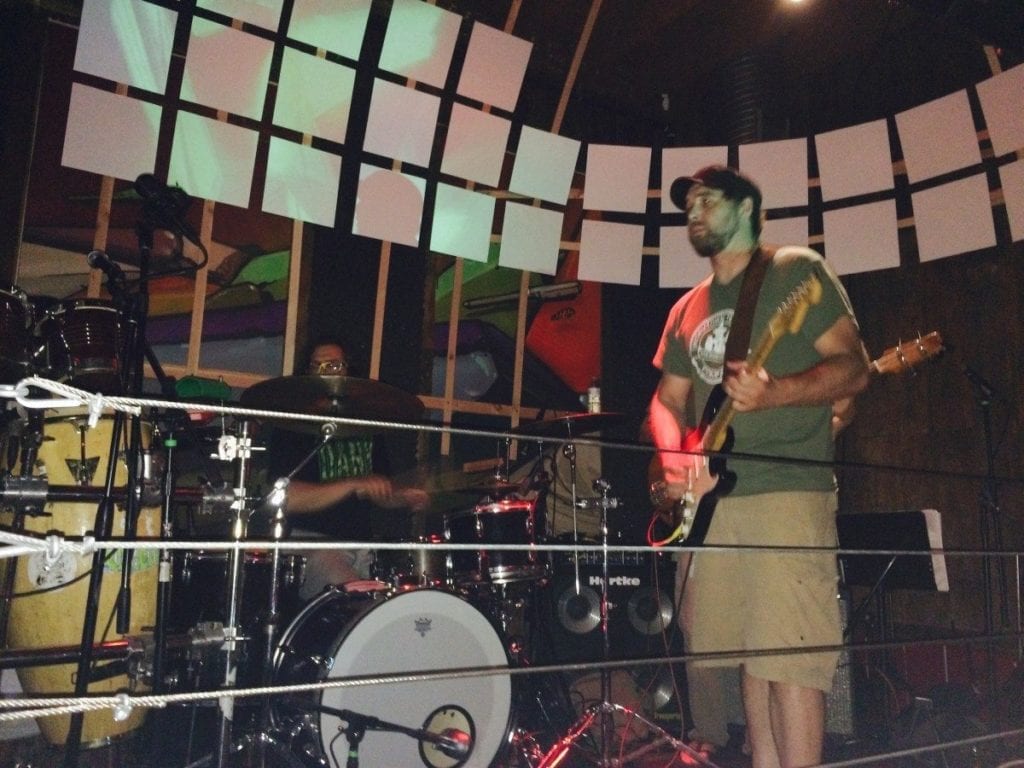 together to blow the roof off the building. Like many of our songs, it’s still in the crafting process, but it’s also at a point where we can share it with our audience and the results have been really positive. “Dansa” I have been told translates to “Dance,” and after a little research, I found it is a rhythm played at celebrations, including summer and winter solstice. I never presented the song to my band as a tribute to Demse Zullo. I just liked the groove and gave the rest of my band the freedom to write what they wanted to it based on what it meant to them. I called it “Solstice” because (to me) it represents celebrating what “has been” at the dawn of a new era. I think that is something we can all share and find meaning within as people in all walks of life. I know personally that this song would not exist had I not met and befriended Demse after moving out here. He’d kept much of what I’d learned musically a lifetime ago alive and relevant within me over the years. So much so, that it transcended into a song I can share with people based on a rhythm called “Dansa” and the energy he brought forth during the many times we were able to sit down and drum together with friends on those magical Saturday evenings.”

Like I said, unfortunately I was unable to record the song, but it so affected me I wanted to give people a heads-up for when they next see Rhythm Inc. The band says they will be recording soon, so be on the lookout for this one- it’s great musically and carries with it much meaning.

On a totally different note, the band ended the night with the song Bomb Dang.  A throwback to the earlier days of hip hop, this song was fun and made the whole room get up and join in in with the three vocalists’ constant mantra “bomb dang, bomb dang.”  While Rhythm Inc has quite a diversity in styles in its individual 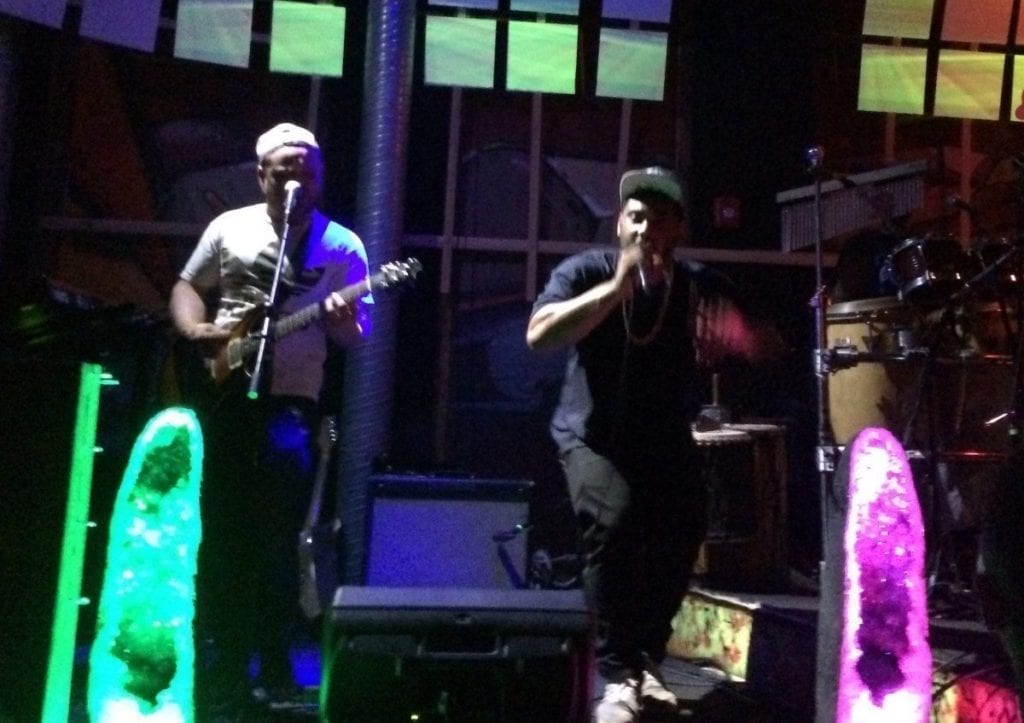 players, who stand out both musically and in their stage presence (which is saying a lot, having seen many a musician who can play, but who shrink back into the background without engaging the audience), to me it was the invisible glue that held this group together that made them special. Yeah, I feel like I’m gushing.  But while I went into this show thinking I would have a nice time, I came out even more impressed by both their professionalism and how much total fun they were.

When the show was sadly over, my trusty sidekick Eve, who had been helping me throughout the night, went to talk to the band.  I had surprised her with who we were going to see, and I think it’s probably an understatement that she was blown away.  I stayed behind while she bombastically accosted the band members with a gluttony of accolades.  I wanted time to reflect.  This night had been an unexpected night for me too. As I said in the beginning, as a new mother, I don’t get to go out very often these days, so have to pick and choose my shows wisely. So glad I had the foresight to pick Rhythm Inc.  This show was at my new favorite venue and, honestly and/or oddly enough (since the genre is so far from my usual comfort zone of The Who and Fleetwood Mac) the band is now one of my new favorite local bands. 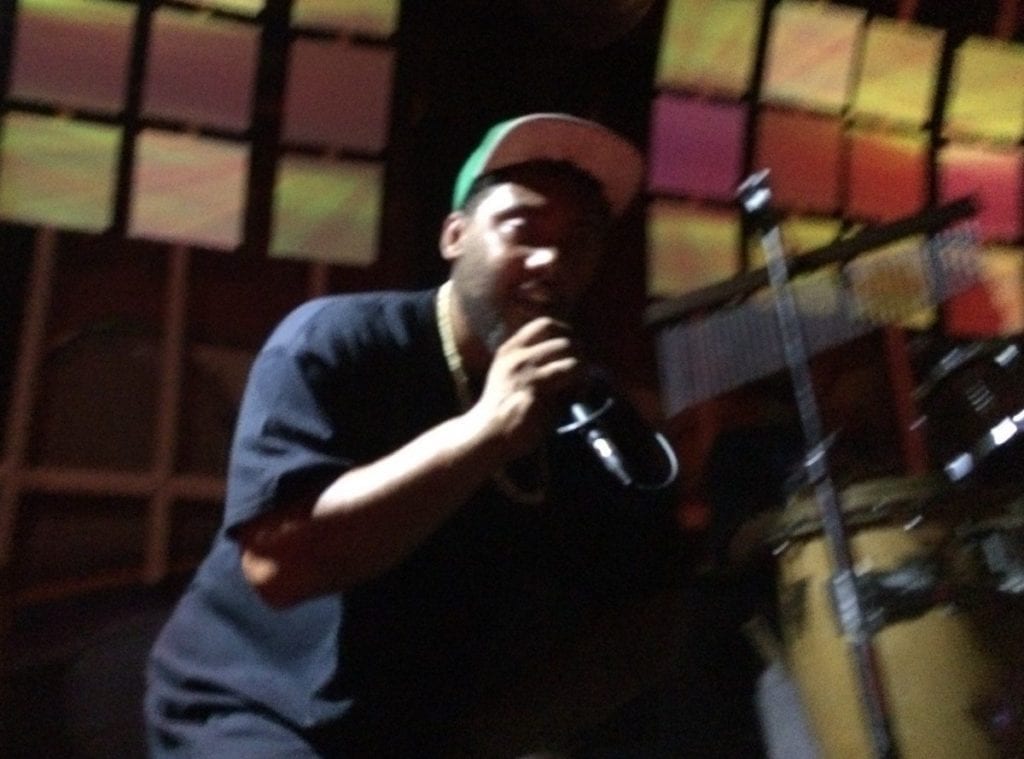