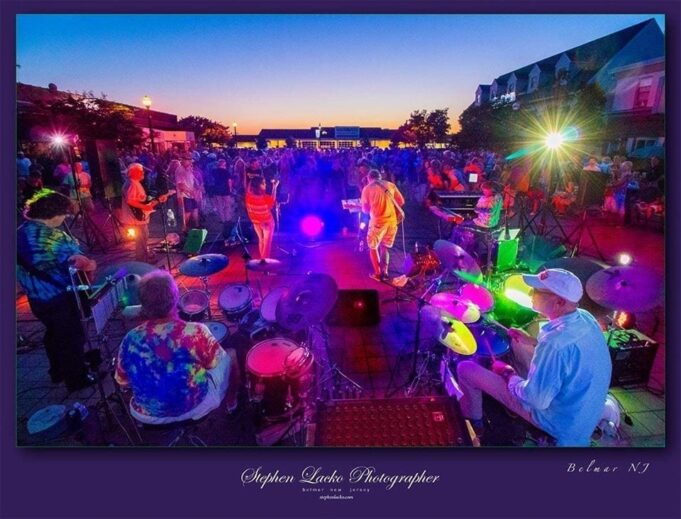 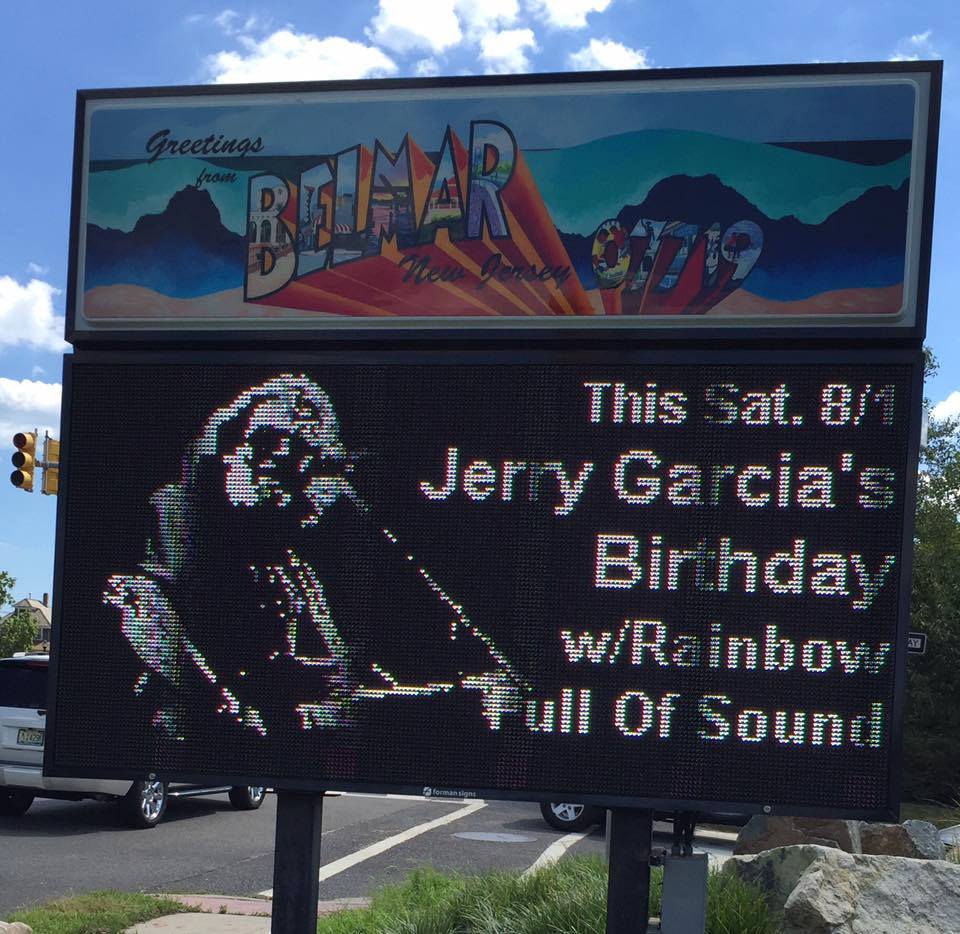 Rainbow Full of Sound and the Jerry Garcia Foundation

Come Together to celebrate the “Ripple Effect”

On August 1st the Belmar Arts Council in Belmar, NJ held its third annual Jerry Day Celebration at Pyanoe Plaza, to pay tribute to the life and music of Jerry Garcia.  Rainbow Full of Sound was the performing band of the day.  The theme of this year’s celebration was “Golden Gate Park, 1969” which included music from Jefferson Airplane and Hot Tuna in addition to the works of the Grateful Dead.  The band consists of Waynard Scheller (Jam Stampede) on keyboards, Dave Berg (Dark Star Orchestra) on guitar, Tom Donovan (Splintered Sunlight and Solar Circus) on guitar, Paul Avrutin (Dead on Live) on bass, Kevin Johnson on drums and Cat London doing vocals.  They were also joined by special guest Bob Steeler on the drums, best known for his work in Hot Tuna and has also appeared with the Merle Saunders Band and the Jerry Garcia Band. 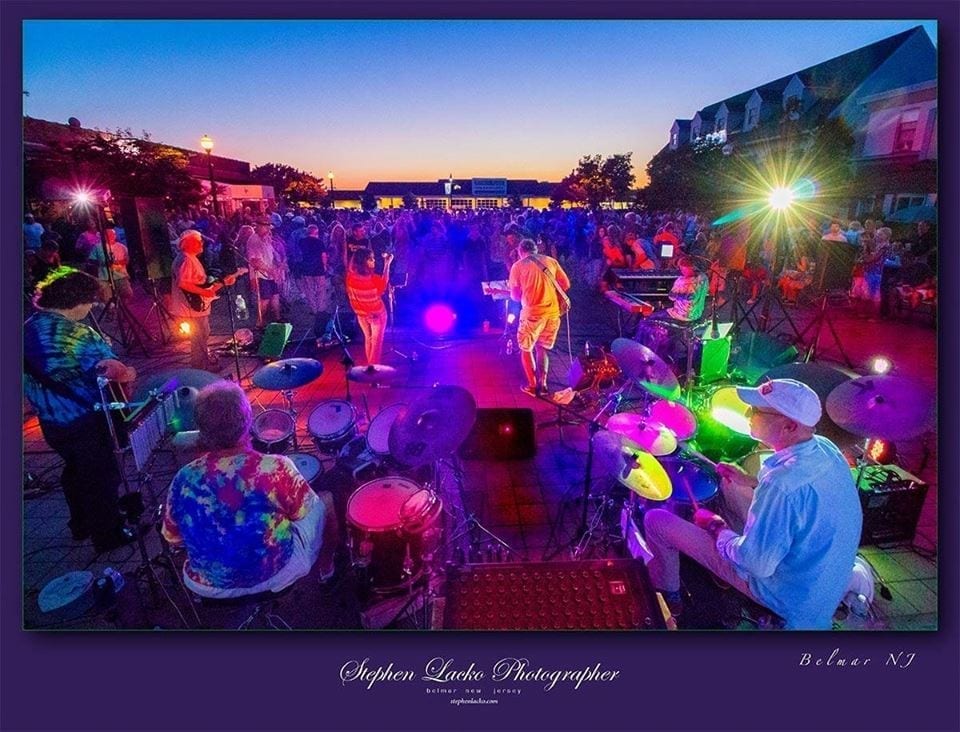 This free and family friendly summer concert was also an opportunity for the Jerry Garcia Foundation to promote its vision and mission in the Belmar community.  The Jerry Garcia Foundation, a 501c3, serves to support meaningful causes through the beauty of art and music. Their mission is to support artistic, environmental and humanitarian causes. The Foundation was established in 2015 as an expression of gratitude, by family members, Manasha and Keelin Garcia, in honor of musician, artist, and visionary, Jerry Garcia. Staying true to Jerry’s values, we embrace the idea that music and art bring great healing to the world.  The Foundation engages artists and musicians who wish to share their gifts for the benefit of the greater good.

I caught up with Waynard Scheller following the show and spoke with him about this event.

LMNR: Any Dead tribute band worth its salt plays on Jerry Garcia’s birthday, what makes this event different?

Waynard: What made this event different was a combination of the energy of the audience, the “A” line up on stage, especially Bob Steeler, and the big screen projections and lighting production provided by Stage Trip Productions.

LMNR:  This event has been happening for three years now, how did this come about?

The Belmar Arts Council approached me and asked me to perform the first year and drew about 300 people.  We were asked back the second year and had about 400 attendees, this year we had close to 1000 folks in the audience.

LMNR:  How was the attendance and the crowd?

The crowd has been enthusiastic every year and this year it was exceptional.  The “Ripple” Effect Movement is spreading across the world and that evening I orchestrated one of the largest ever sing-alongs with 1000 Deadheads singing with the band to that song.

“The vibes on the Ripple sing-along are amazing!” – Manasha Garcia

LMNR: Do you play actual historic shows of the Dead or are you like many other tribute bands who change up the set lists?

Rainbow Full of Sound has covered all 8 Radio City Music Hall shows.  We’ve also performed complete Reckoning, Shakedown Street, and Jazz is Dead.  Some shows we play where we change up the set lists of previous shows.

LMNR: Is there an era of the Dead you guys focus on?

Mostly from the 1970’s Dead, but we also perform all of their songs through 1995

LMNR: Why did the Jerry Garcia Foundation get involved in this year’s event?

Manasha Garcia reached out to us.  I’m not sure how they heard of us, but having Bob Steeler in the lineup may have caught their attention.

LMNR:Is this their first year working in partnership with Rainbow Full of Sound? Yes

LMNR: Since this was a free show, how did you get people to connect with the Foundation during the show in order to help raise money?

At this point, having them there was more about raising awareness about the Foundation.  We had two board members attend and gave introductory and closing remarks at the show.

LMNR: How is their involvement helping the Belmar Arts Council and the surrounding community?

The Foundation promoted the event and their name help draw attention to the show.  They also donated Garcia prints to the event to benefit the Belmar Arts Council.  I believe that the participation of the Foundation helped the Arts Council gain status in the community.

LMNR: Will you be doing this again next year and in partnership with the Foundation?

Rainbow Full of Sound will most likely be back.  I’m not sure about the Foundation, but we haven’t discussed it yet.

Any future show dates?  On August 6th we’ll be at the River Rock Beach Bar in Brick, NJ and then in September we will be returning there to play and will appear at the Elemental Fusion Festival on the 10th.  Rainbow Full of Sound is also looking forward to returning to Edgars Pub and Coda, as well as a few miscellaneous dates yet to be confirmed

LMNR: What’s on the horizon for Rainbow Full of Sound?

We hope to perform nationally, to release a studio recording, and there are other exciting projects on the burner as well.

From The Heart Of Me

Playin’ in the Band