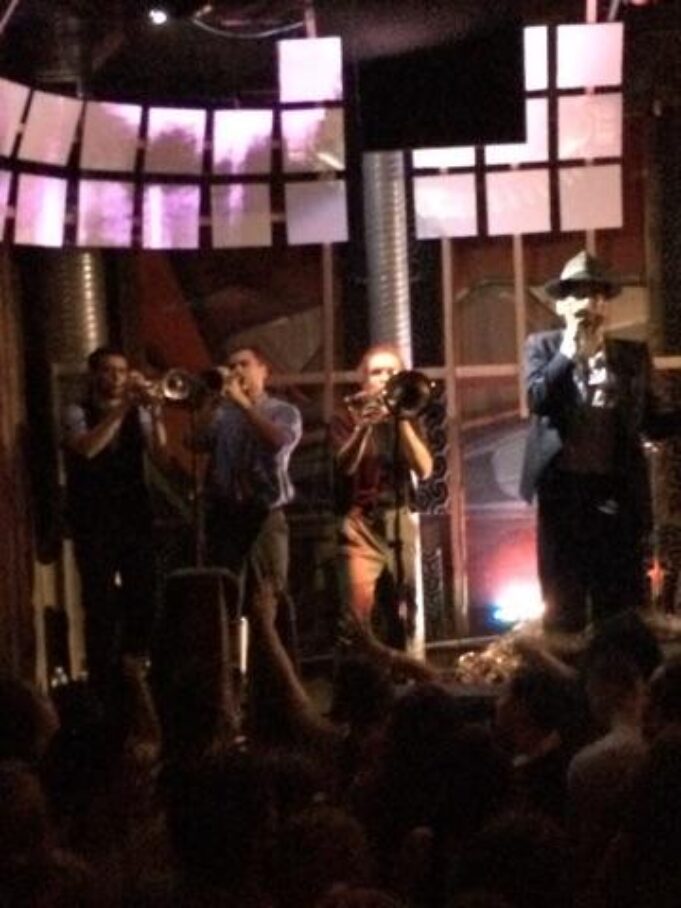 People so often use the words “gypsy” to describe Bella’s, but I feel that is to minimize what they accomplish in their live (and studio) music. Yes, there are times while watching that I feel like I could be stepping into some wonderland version of the set of King 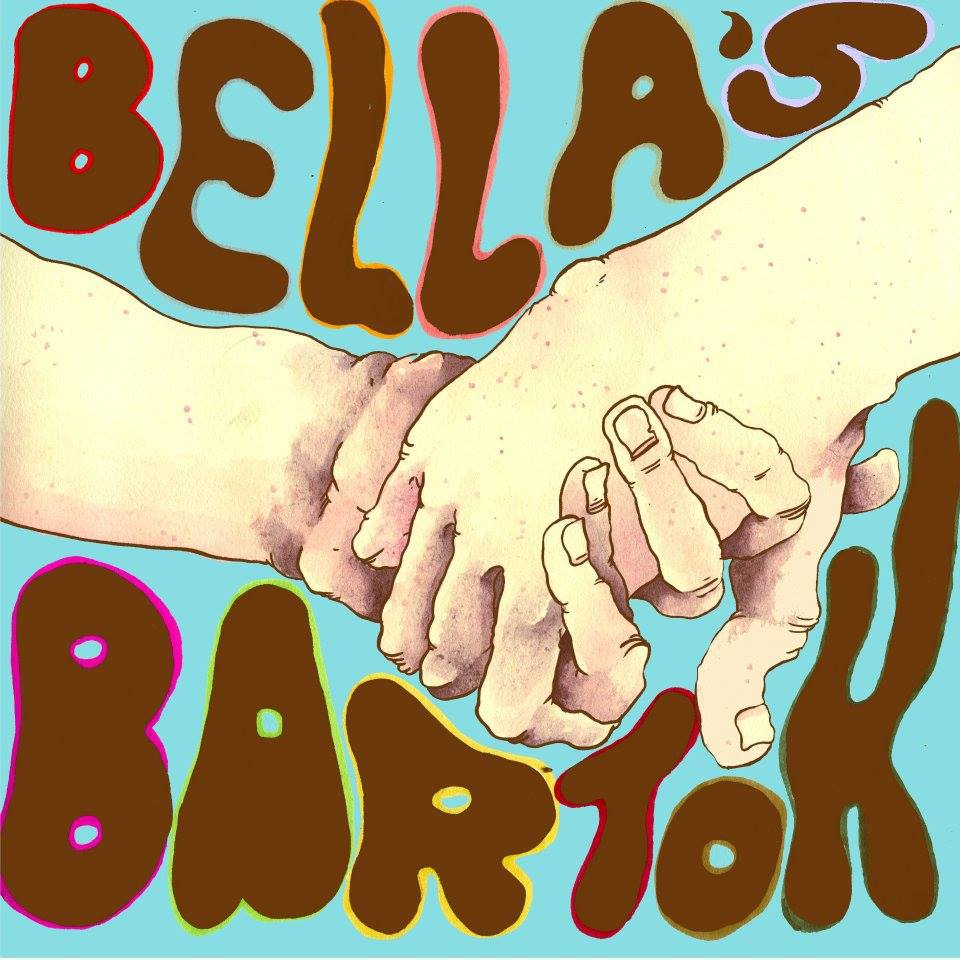 of the Gypsies, but then again it’s appropriate that this band would command that caliber of a mixture of obscure star power.

I never get my friends to come out. But I’ve been talking about this band enough that I finally got a good size crew out with me. What fun!  With my handy dandy notebook in hand, we descended on Hinge in Northampton for my second weekend in a row (hurray!) for what I was sure would be an awesome show.  I was not disappointed.

My first introduction to Bella’s Bartok was at another local Northampton hotspot some off night when I just happened to be out and about.  I walked into complete mayhem and was quite taken aback.  I asked my night’s compatriot what the heck was going on and he said, “Oh, Bella’s Bartok is playing tonight.”  Bella’s who? Well, obviously I wasn’t in on the secret (or not so secret) since the place was packed with a veritable Who’s Who of the local music scene (if there is such a thing for such a small yet vibrant music town).  Anyhoo, this time I was prepared.

I was pregnant the next time I saw Bella’s (also at Hinge).  I was so excited at the prospect of joining in on what can only be described as controlled pandemonium on the dance floor.  Although I didn’t partake in the dancing that time, not because I was pregnant

(though that might have been a good reason), but because the dancers shook the floor so much it actually made me fear for my safety- it was THAT intense of a dance scene, with people jumping up and down to the band’s pulsing anthems.

I walked into Hinge just when the band was starting its sound check.  I had arrived early because I was going to interview the band as well (be on the lookout for more of that interview in the weeks to come!).  I came into the smooth vocal stylings of Mr. Jesse Putnam (Accordion, Mandolin, Guitar, Vocals) singing his rendition Barbara Lewis’ eternal classic “Baby I’m Yours.”  Quite a departure- they should consider adding it to the set list!

The interview went well – what an awesome crew of really genuine guys!  So, we’ve got: Asher Putnam (Vocals and all-around entertainer), Jesse Putnam (Accordion, Mandolin, Guitar and Vocals), Chris “Fancy” Kerrigan (Guitar, Clarinet, Vocals and physicist?!), Dan Niederhauser (Bass and Vocals), Amory Drennan (Trombone and Vocals), “Evil” Dan Surdyka (Trumpet) and Crisco (Drums and Trumpet).  For the night they added guest artists J. Witbeck and Alex Freedman on Tuba and Trumpet.  Wow, they really fill-up the stage, especially at Hinge, but it didn’t feel like it was bursting at the seams- perhaps the best 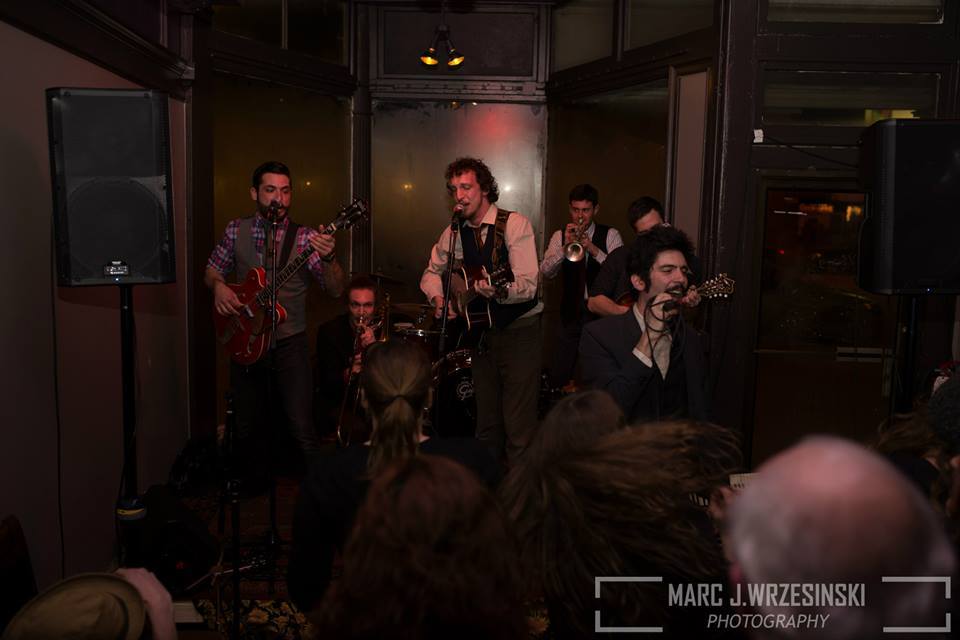 synonym would be “complete.” Whatever you call it, it was nothing if not professional and seamless.

On their Facebook page, Bella’s Bartok calls their genre “Muppet Punk, Freak Folk;” I’ve also heard Asher describe it as Bohemian Dance Punk.  I like that- bohemian. But really, it’s hard to classify Bella’s sound because they are quite simply: Unique.  In a sea of musicians, good musicians, great musicians, Bella’s stands out precisely because they are hard to define.  At the same time, their music is “pop gold” (as Chris puts it), with a creepy sound full of minor chords that underlie their boisterous vibe.   It’s singable, emminately danceable, a breath of fresh air, and their shows can be described as energetic, inclusive and engaging. If there is one thing this band knows how to do it is connect with their audience and have fun.

During the interview I asked the band which of the songs on the night’s set list were their favorites and why.  The conversation that ensued was truly entertaining, deep and witty.  Chris led-off in his most stentorian voice to tell me that “For the Children” was one of his favorite of the night’s songs.  He said that “colloquially, in the band it is know as “pop gold” because it IS pop gold.  It’s kind of what all of us like to do – play a kind of pop music that is disguised as something else.”  I pushed further, asking what he meant by the definition “pop music.”  The band replied that “it’s got a hook and you can dance to it- it’s catchy.”  I mean, “pop” can have such a negative connotation in certain circles, but the band explained that they meant “pop in the way that the Beatles were pop music, not Lady Gaga.” Yeah!  Jesse went on to tell me that the song was written by former member Sean Klaiber as a part of a series (“which also features accordion so it’s obviously the best song ever”).

Jesse then interjected that he likes newest song, “Momo,” the most.  Asher wrote it about a former cat they had who was hit by a car (“she is survived by her brother Nico”).  They remarked that this tune was also fun to play, another pop one.  Interesting…

I asked the band about the writing process; I was curious if it was more formal or organic in nature.  They said really it is a combination of both.  Asher remarked: “sometimes I write a riff on the guitar and I bring it to these guys and they write all the good stuff;” for example, for Momo and Better House, Asher brought them the framework and the band sat down in a room and over 3 or 4 rehearsals the song slowly progressed.  It started out as one thing and ended up another, and continues to progress in practice, as well as in performance, adding new subtleties for fans who might get excited over different aspects.  Chris observed that touring writes a lot of songs for the band: “If you play a song 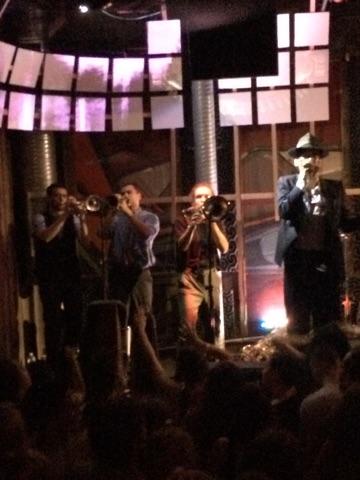 for months and months and months, it gets worked out, parts change; it becomes this entity that changes itself in a way.”  Crisco pushed it further, remarking how songs change sometimes when you’re in the midst of playing them, and Jesse chimed in how “sometimes accidents happen when you’re playing and sometimes those accidents are happy accidents…”  On the other hand, the band did concede how Mama Dan (Dan N.) and “Fancy” (Chris) employ a more “formal” system, writing out their songs on sheet music that the band says they can’t even read, but it’s an endearing process and they all work hard to honor their carefully thought out creations.

One of my favorite songs of the night was “So Calm, Relaxed” from the “We are Not a Cult” album.  I like it because of its infectious rhythms that are both fast paced and then slow down, keeping you on your toes.  The dichotomy of the dynamics of this song not only give it an eclectic feel, but make it novel in its creepy use of the tried and true “falalalala.” Check out how into it that Amory the trombone player is and how Asher is leaning into the crowd, with Dan S. waving his hand in the background- this band means it with a vengeance!

Another of my favorites from the night was “Frankeinstein’s Monster.” First of all, I love that this song gives me a chance to sing along with a line like “It’s Alive!”   The horn section really takes it away on this one. Oh, and I just get a kick out of Dan N’s headbanging bassplaying!  I had a chance to really get into the thick of the dancing for this tune.  Pulsing, pushing, sweating, pulling, throbbing- how else to describe the dance floor but that it’s alive!

Unfortunately, I didn’t get to see the end of this show (baby duty called), but leaving early, while sad, didn’t leave me feeling empty.  You imbibe so much energy at a Bella’s show that it  fills you up for days.

I believe that the best music makes us just a little uncomfortable, pushes our boundaries, but assures us at the same time.  It challenges us in a way that gives meaning.  But, more than anything, it lifts us up because it’s quite simply fun to listen to.  I got that from this show.  Right on!