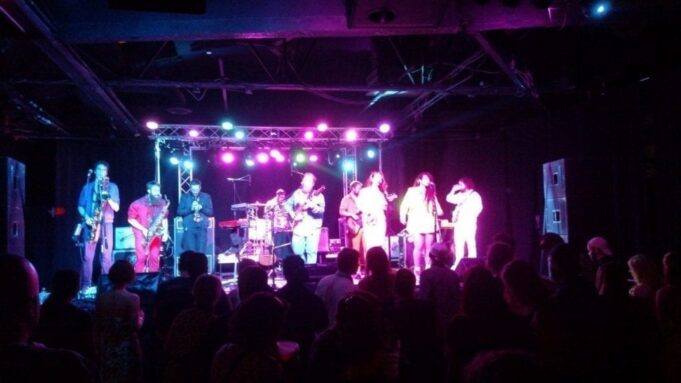 Park Street Saloon Columbus, Ohio August 21 2015   by Jack Jolieri from Rubix Wheel   To Submit a review for consideration hit us at [email protected]Check out the Live Music News and Review.com Facebook page for updates and announcements. G. Finesse with Black Eagle opened the show at this mid sized venue in the Arena District of Downtown Columbus. I only caught the tail end of their set as they did a couple real jazzy hip hop songs and then “Layla” cover by Clapton. What I saw I really enjoyed and so did the crowd. They combine Smooth Rap (somewhat like J-Z) with a jazzy band that makes for a great backdrop to the “suave” of their lead vocalist and female background vocalist. Turkuaz @ Buffalo Iron Works – Dollar Bill

I met a couple of the members of Turkuaz by the merch booth before the show and they were happy to see me again. Sammi was looking sexy as ever and she gave me a hug. I shook hands with Craig, and then finally got to meet the frontman Dave. They radiate positive energy not only on the stage but off the stage as well. They seem to be quite upbeat people from Brooklyn, NY. They all went to Berklee in Boston, and Dave said he ended up doing exactly the opposite of what he majored in. I’ve seen Turkuaz at their Columbus shows for the past couple years, and this one was sure to be a special time. The band members all had on outfits of solid colored reds, blues and one guy was wearing white. I guess you could call them jumpsuits. Anyway, they weren’t posing, it was all part of the show and these guys went to School to learn some tricks of the trade. One of the first songs they played was “Tiptoe Through the Crypto,” a regular song on JamOn(SiriusXM) right now. I really enjoyed watching Sammi belt out the lyrics to this one, because every time I had heard it I thought it was their old Female Vocalist with the Blonde Hair singing it. But now Sammi is the star of the Female vocalists, and her cohort is just as good as the girl who left. They do simultaneous choreographed dancing and singing, making it a great way to get the audience moving. People at the show were very receptive to the band, and most of the ones I asked had seen Turkuaz before. More and more people came in to watch the

band, and by the time it was over the entire dance floor was packed with people jiving out to Turkuaz. Craig Brodhead plays both keys and lead guitar. One of my favorite songs they play is “Everyone’s a Winner,” by Errol Brown, where Craig does that funky guitar part and Sammi sings like a boss. The bassist hit in a couple really good solos during the night, and he almost looked possessed as he bobbed his head around while doing really intricate and awesome bass solos. The drummer even took a solo during the set. And the sax player finally took a badass solo on their last tune, “The Shape I’m In” by the Band. Each and every one of the performers in this nine piece band is truly talented to the T, and combined they get audiences moving and grooving. From Rumba Café to the Park Street Saloon in two years. From the Brooklyn Bowl to Irving Plaza in a year, a great band like this is on a meteoric path to success. Turkuaz has been touring from Brooklyn to L.A. and all points in between for the past few years, and it has paid off for them. If you like funk, rock, originals, classic covers, fantastic live shows, and dancing your @sss off, check out Turkuaz in a town near you!

We are in the midst of an amazing festival and summer season, and we are so thankful to be working w […]

We are in the midst of an amazing festival and summer season, and we are so thankful to be working w […]

Newton, MA – Way Up South, a local Massachusetts band out of Northborough, is slated to play a benef […]