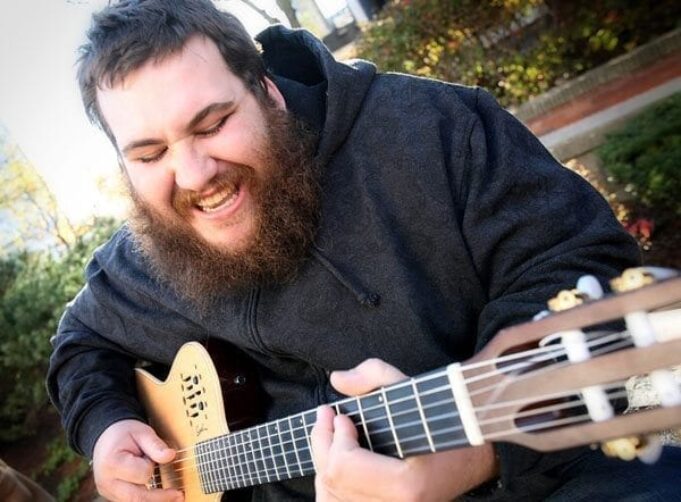 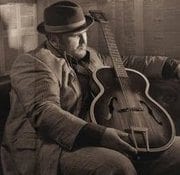 I live about an hour and a half from Albany, NY, so it’s definitely a bit of a haul to see a show there at night. But the state’s capital, which is a cool kingdom of culture from musical to artistic to academic, is always worth a drive to check out. This past Thursday on April 9th was especially worth the trip I made to the very nice Hollow Bar + Kitchen to see two awesome live acts, The Organically Good Trio opening for Zach Deputy.

The trio is comprised of leader Paul Wolstencraft on keys, Steve Fell on guitar, and, last night as guest, Bill Carbone on drums. They came out around 9PM and eased the patrons of The Hollow right into all the wonderful music of the night. The opening tune,  “All Systems Go,” as well as the second tune, “Earthquake,” had a rock steady beat, and a slow and very heady, extra-reggae sound from Fell on guitar and Wolstencraft on keys. Wolstencraft, while playing the melody on keys with one hand, also thumped out a very heavy bass sound with the other hand, which was very cool to hear, and did I meantion the groove? 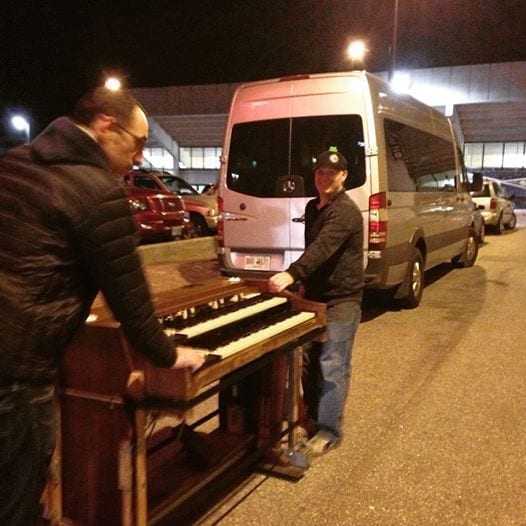 The band then switched their sound up a bit with another original, “Wild West,” which was faster and jazzier. The front and center feature melody-maker on this and a couple other tunes of the set was Wolstencraft on keys, who switches back and forth between cool, funky riffs for the main melody, and some really great soloing. Then he passes it along to Fell, who busted out with a neat, heavy distortion sound on his guitar and returned with great bluesy-sounding soloing.

Holding the groove all together is Carbone on drums, who is not a regular member of the group but is a guest on their debut album, Alakazam, and who has been sitting on as guest for some shows. I am always excited to get to see Carbone drum, whether it be with his regular group Max Creek or with any of the other many groups and artists he jams with. This night, he held a constant jazzy, flowing backbeat behind Wolstencraft and Fell as they soloed away. He got to let out a short but great little drum break in an original tune named after the album, which was quick and hot. “Loose and tight at the same time,” my cousin described Carbone’s playing to be. The tunes before and after ‘Alakazam” dropped the sound back to the slow rock steady groove, one of which was a cover of an old ska tune called “Surfin'” and sounded a lot like The Specials’ “Ghost Town.”

The entire band was super tight as a whole too-they could play around each other really smoothly, and it combined to make for one unified, rich, jazzy sound. To make a personal interpretative comparison, I could close my eyes as I listened to these guys and easily believe I was at a Soulive show. They were the opener this night, but are definitely recommendable to headline any venue. The song to end the set was an original called “Hang ‘Em High,” which switched back to the more up tempo groove, had some last great solos from Fell and Wolstencraft, and warmed up the crowd perfectly for Zach Deputy to come on.

Zach Deputy shows, every one of them unique in their makeup (but similar in their delivery of a great time) are really something first-hand experience illustrates better than words will ever do. But to make an attempt with the latter requires a breakdown of the anatomy of the one-man-band: Zach sits down in front of his equipment, a cool big spread of musical tech. He starts off on a prettier note, plucking along some quasi-type scales on guitar. The playing slowly turns into something bouncier, and then he kicks things off.

His musical show involves ‘looping,’ recording pieces of playing and singing or whatever else on stage, then playing the recording back so he can solo or sing on top of it to create a cohesive, multi-layered canvas of beat and melody. He starts with some great beat boxing, adding a snare drum beat and finally a funky bass line. As soon as this got going, a small roar came from the crowd that already had the Hollow Bar packed-excitement from an audience of loyal Deputy fans that knew the night was about to get wild. 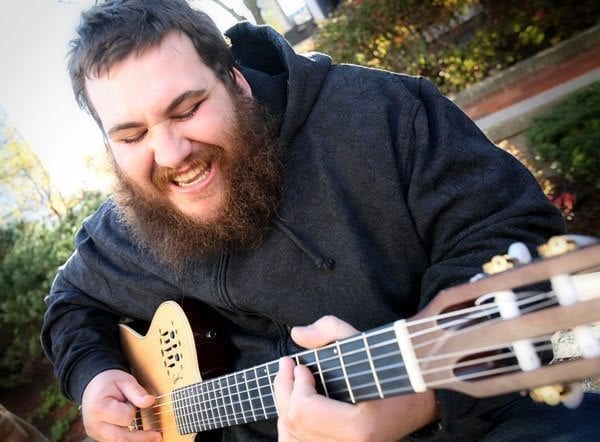 With the background jam in place, Zach starts to sing with a great, almost falsetto-high voice that might slightly shock a first time listener, but in a pleasant way. One of the neat parts of Zach’s music is that its either incredibly pretty, in his own songwriting stuff, or downright funky and made strictly for dancing, or at times both, as in his opener where he continued to pluck neatly along on top of the layered lines that had people moving instantly. In the first jam, Zach fittingly sang a sweet-sounding line of “I’m on my way.”

The music started to pick up speed, and the looping bass and drum lines grew more energized making much of the set have a more dance-hall type of beat. Just like Zach is able to infuse different elements together in songs, so does he also blend different genres into cool hybrids as well. The second tune that brought the driving beat that would permeate the night also had a twinge of old timey rock and roll, sounding like a charged up version of a 1950s western swing-band number.  A large part of Zach’s musical influence, however, comes from his coastal roots, and the next few tunes showed this in their island-sounding melodies. This side of Zach is always light and bouncy and super fun to move around to. There’s room for him to play around the most with his guitar soloing, and here it brought moments of some real shredding.

As the set progressed, Zach became more and more inclusive with his looping creating larger rounds of recorded lines and sounds. It soon becomes evident as a distinct art form that he dominates:  the ability to throw both like and unlike things together in one, Picasso-like creation of both musical richness and jocular vocal and sound-effect laden, tripped up fun. A regular feature of Deputy’s jams that I personally love is when he stops all of the looping music suddenly, and in the following blank space of silence either coos soulfully or plays some lone guitar lines. I love this because after this brief pause always comes a jump right back into the rage as he hits play on the recorded looping music again. Whereupon the audience, which at this point had swelled into a large and rocking group of listeners, also starts and stops in perfect unison with the sound. It’s really something to catch a set from this guy to see for yourself.

All of this improv territory allows Zach to really extend his songs for great lengths of time, as they never lose their heat or their feeling of encouragement from the crowd. One long jam sequence, following the coastal sounding part of the set, featured a drum and bass breakdown segment, notes from a synthesizer, some impressive rapping for a time, multiple starts and stops of the music, and a smooth transition into a really up tempo, awesome cover of The Police’s “Walking On The Moon.” 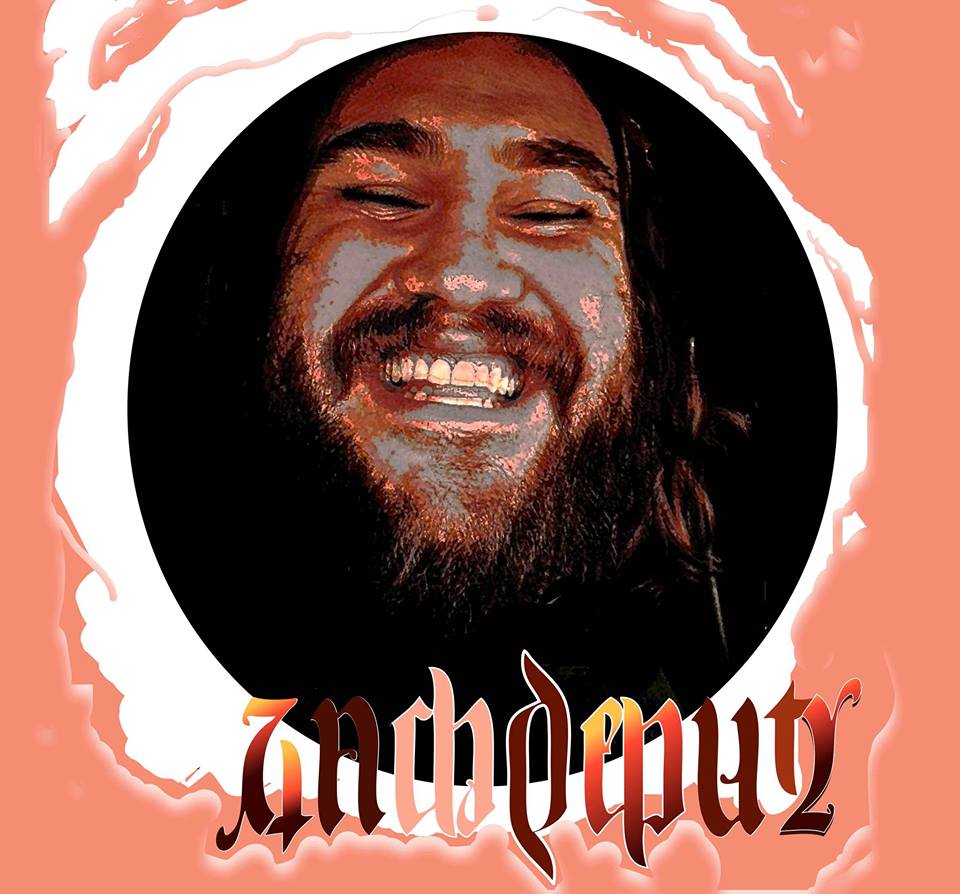 The other super long jam that Zach segued effortlessly into was “Put It In The Boogie,” which was the unquestionable high point of his show; another  train of improv that held the crowd in full raging sway for the entire time.  With this tune, he always introduces “Leroy to the stage,” a name thrown out in jest as another funky bass line began this track. Some more guitar work mixed with vocal improv where Zach got his silliest of the night and where I caught a lot of little lyrical snippets of classic songs thrown together. In and around Zach’s jocularity, the heart of the groove that keeps the people jumpin’ and swingin’ never quits. As I looked around the crowd, I saw a small sea of fans that never wanted the beat and the playing to end.

Of course it did, after a few reggae-esque tunes to end the set, one of which was a surprisingly upbeat version of “legalize it.” In the first encore, Zach touched upon a gypsy style of soloing on guitar over some more beat boxing and bass lines, and ended with some more quick and hot rapping. The second encore, an original called “Jump In The Water,” again reached ground of both coastal groove to dance to and beautiful songwriting. Listening to him sing the last notes reminded me that behind a lot of the funk and dance are very personal and introspective lyrics about love, life, and family. Zach Deputy has always been, and still is, lord of the mutually shared, one-man and many-fan improv live funk experience-creating in the moment for the listener’s partying delight-but also always been a thoughtful and talented songwriter.