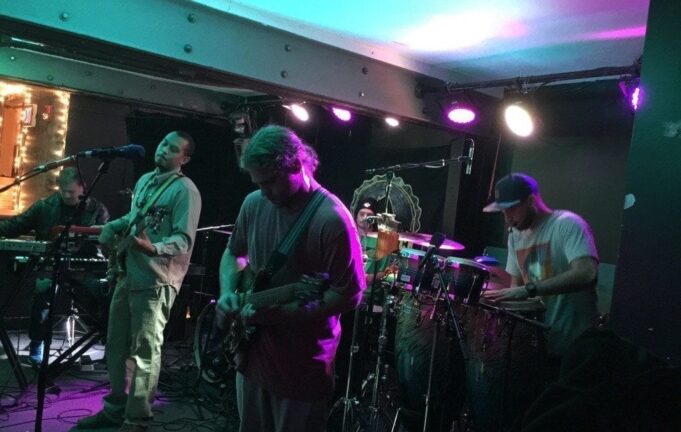 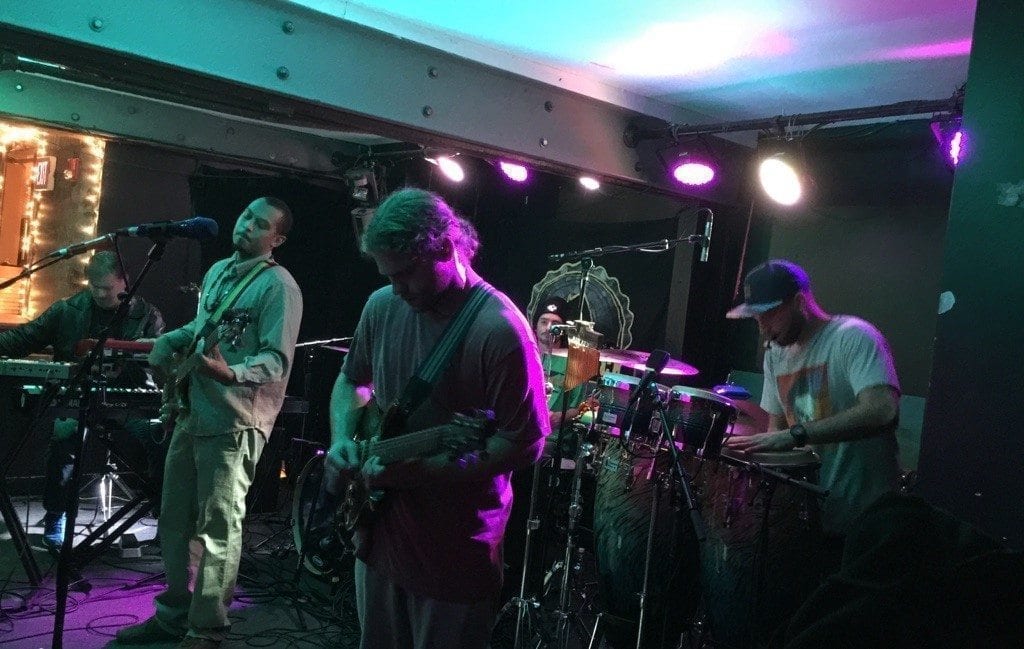 
Check out the recording of the show here:

On November 8, Viral Sound arrived for the first time at The Stone Church Meeting House in Newmarket, NH. The boys were ready to share the stage that night with their New Hampshire comrades, Stop Tito Collective. What would follow, the eleventh stop on Viral’s fall tour in support of their debut album, Exposure, was a night of raw musical energy and booty-shaking fun for an appreciative, smiling audience.

The Stone Church (built in 1832 to host Unitarian worship services) is a very cool venue which overlooks the town from high atop Zion Hill; it has been hosting live music for over forty years. The staff was welcoming and professional as the bands loaded in and enjoyed some excellent pre-show food and hospitality.

Soon enough, it was time for the music to start and Stop Tito took the stage, working their way almost immediately into a bouncy groove punctuated by hot solos and an upbeat energy that grabbed the crowd as the dance floor filled in. 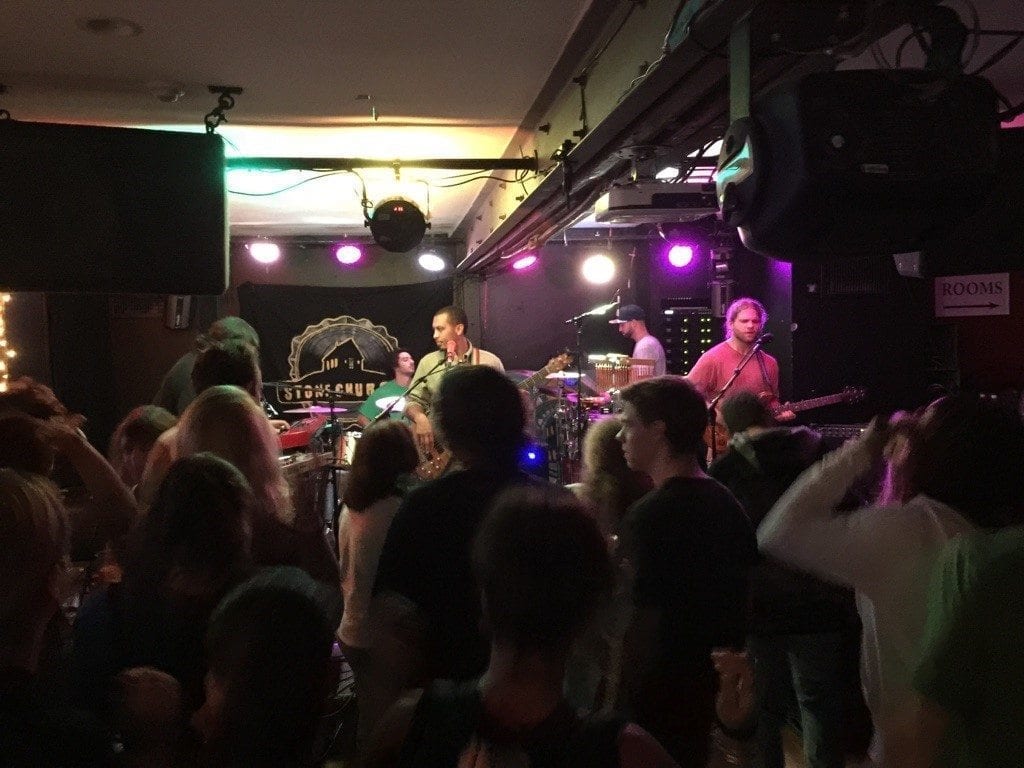 By the time Viral hit the stage for a two hour, two set, ten song show featuring six songs from Exposure, tables had been moved and dancing muscles had been warmed up; the boys jumped right into it and began to do what they do – weave a musical spell around the room.

The first two songs, Kick It and Lucky, were characterized by a jazzy bounce as the five synchronized players passed around the focus in classic Viral style. By the third song, Cloud, the band was fully into the flow and dragged the crowd with them into the deep water, tightening down the screws with a mean, moody fifteen minute excursion featuring Jordan Giangreco on keys and Charley Zahringer on guitar. At this point, members of the crowd were trading glances as if to confirm that they were not alone in getting their mind blown. Things had gotten serious.

From there, the focus shifted to the poignant His Dream with it’s flowing, hopeful tone highlighted by Ariel Moore’s heartfelt lyrics. This one just floated by, hypnotic as a cloud on a warm spring day.

The end of the first set was in sight but there was still a solid bit of business to take care of. The band stayed upbeat with Time Waits, a knee-knocking, arm-flapping chunk of funk featuring jazzy walkabouts, bluesy chords, and fully tickled ivories. 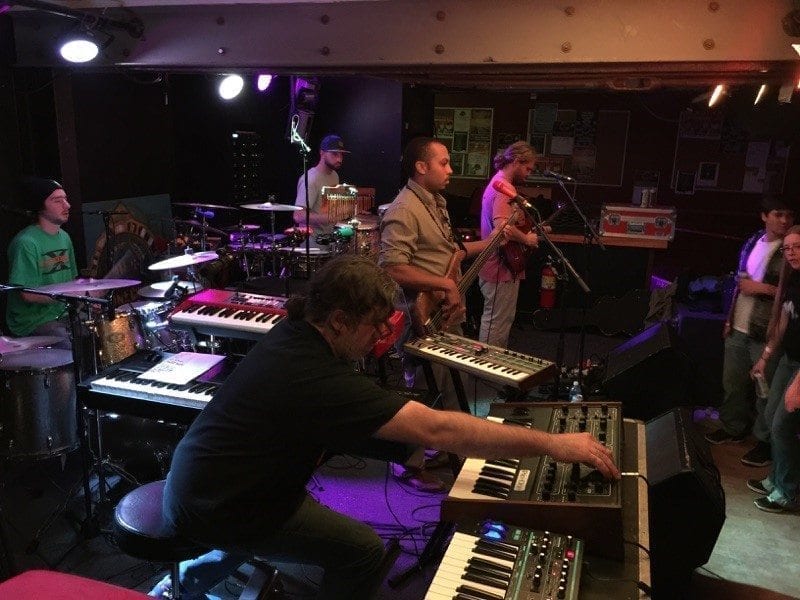 Time may wait but the boys didn’t, jumping straight from the last note into the kaleidoscopic voyage that was Whose House. Songs can be said to travel distances; I challenge you to find a piece that covers more ground than this set closer! The first half of the song was a spaceship ride steered by Giangreco’s control room. About halfway through, the rhythm section decided it was time to go bananas, highlighted by a bouncing bass solo by Moore into an all out latin rhythm assault of a jam led by drummer Dan Rourke and percussionist Chris Ottaviano  The crowd moved like skeletons on marionette strings for several minutes until the band settled back into the song to close things out with Zahringer playfully teasing The Beatles’ Norwegian Wood into a double-time groove before segueing back into Whose House to close things out for the sweaty, enraptured audience.

After a short break, Viral returned to deliver a scorching second set that served to highlight their range and versatility.

Playing in a venue that had been an actual church, they chose to open with a cover, a fairly rare occurrence, by the most revered hymnodists of the jamband world, The Grateful Dead; Scarlet Begonias was a treat for the waiting fans with Jordan taking over the lead vocal responsibilities as Ariel and Charley lent sweet harmonies and Charley’s hummingbird fast right hand fanned the strings in memory of the beloved Saint Jerome. 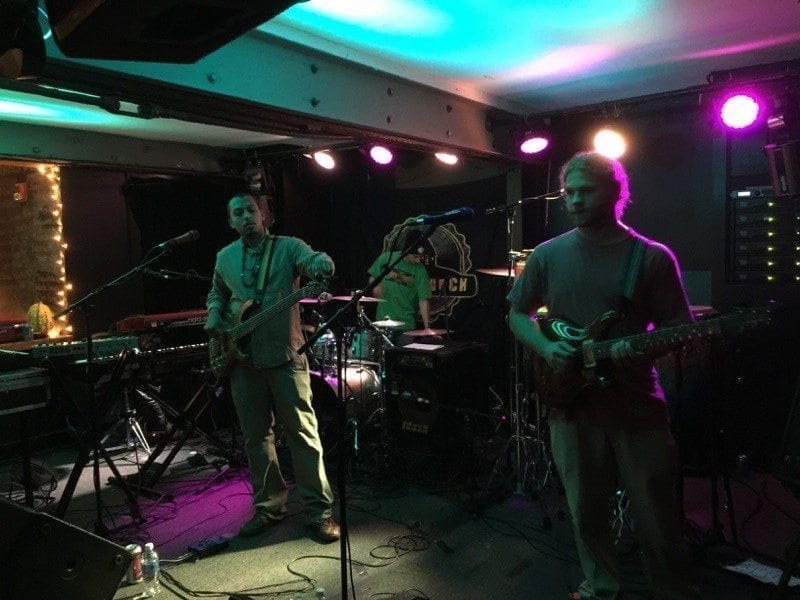 From there it was back into the catalog of originals for the soaring psychedelic bluegrass of Lead the Way, a foot stomping favorite every time out. Next up, a sharp turn of direction delivered the hip hop bounce and swagger of Team Space, featuring organic electronica-style buildup and release tension drops done with supreme taste.

Unfortunately, all good nights must end and things did in fun fashion with a sprint back into the latin flavor of the Canciones Del Mar encore which gave closure to the audience, as they were forced to accept the fact that the establishment needed to close.  A bond was forged among all in attendance as they headed homeward carrying embers of musical warmth into the brisk New England night.

Chck out our review of the John K. Band at the State Theater