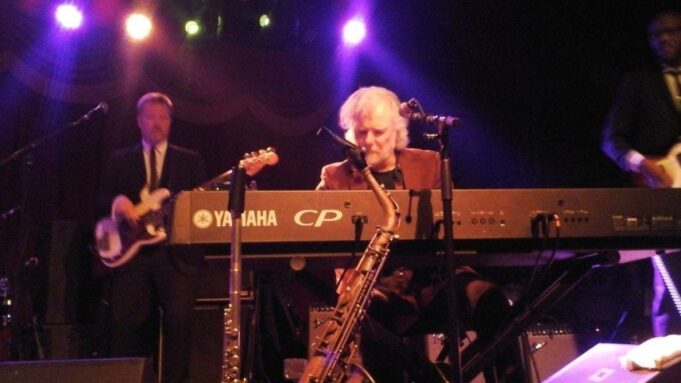 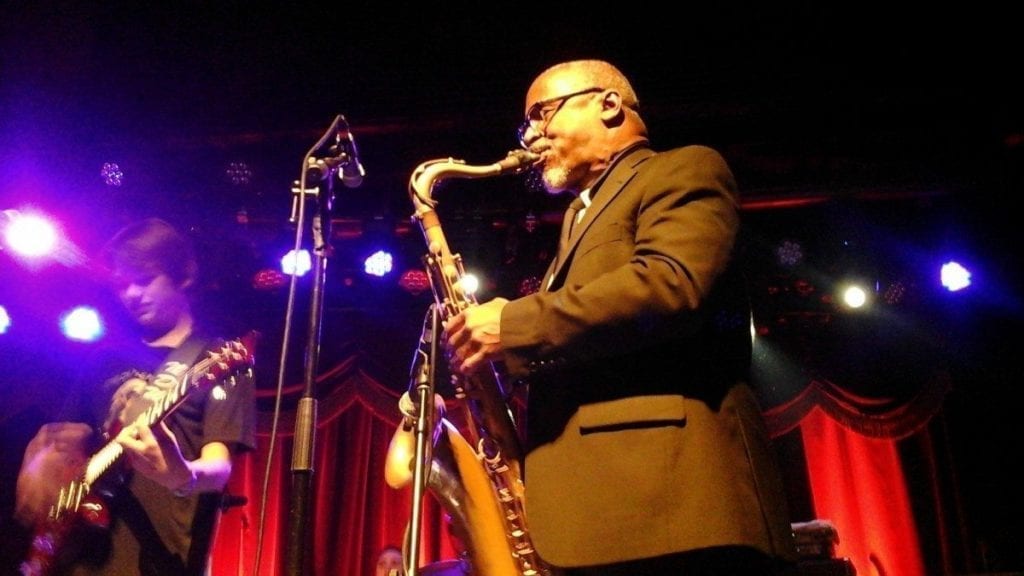 Space, time and the Infinite grooves of Karl Denson’s Tiny Universe took the audience on a wild ride at the Brooklyn Bowl last night.

Opening for KDTU were Lions on the Moon, a group of young musicians, none of whom are over the age of 14, and who immediately raised the bar high for the rest of the night’s performances.  14 year old Henry Thomason drums, 13 year old Dylan Niederauer on vocals and bass guitar, 12 year old singer-song writer Nicky Dylan Winegardner on vocal and rhythm guitar and 11 year old Brandon”Taz” Niederauer, on vocals and lead guitar performed a medley of 8 songs, including the blistering original, Guitarmaggedon and some covers such as the Stevie Wonder’s classic, 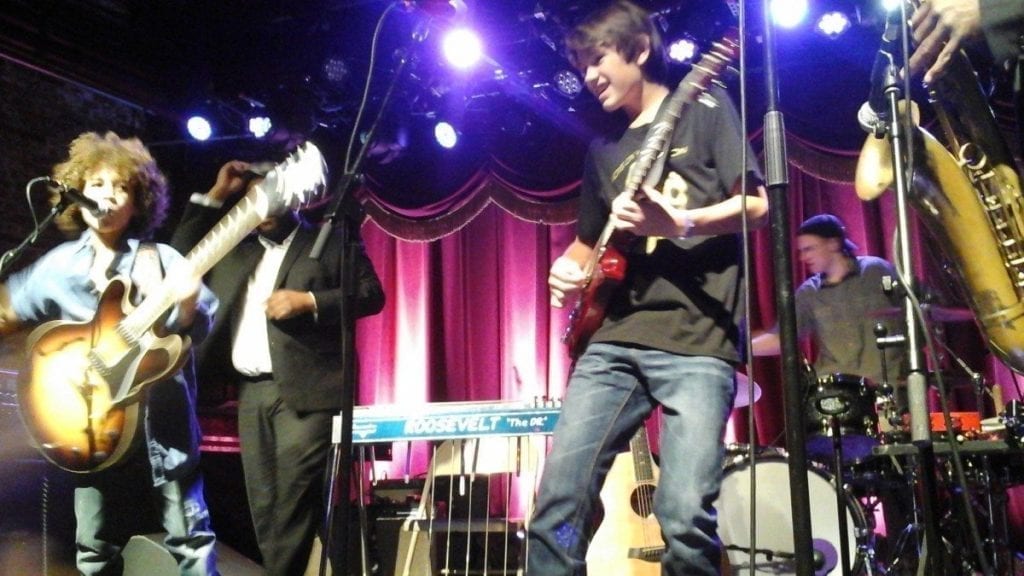 Higher Ground, which the legendary keyboardist Chuck Le
avell (Allmans, Stones, Clapton) guested on… This band exudes purpose and power, and is not gimmicky or contrived which is unusual for a band so young.  Taz’s incendiary fretwork is breathtaking, his leads are dangerously sharp, explosive and soulful, with a trajectory that is reminiscent of Hendrix, yet completely his own.

KDTU took the stage around 9:30, opening very appropriately with, The Power of Soul, the seminal Hendrix, Band of Gypsey’s tune.  Karl Denson and the band kicked into the opening riffs in unison displaying a startling combination of crisp ensemble precision and funky relaxation that paid homage to the original recording with Buddy Miles at the helm. Karl Denson’s vocals and sassy sax keeps control of the trip just when you think they’ve fallen off the tracks.  DJ Williams on guitar seethes with a tidal power, intensity, and protean changeability, navigating seamlessly between funk, rock, Wes Montgomery -like octave voicing’s, and even fusion. Karl Denson cooks with a dash of soul, a cup of Rock and R&B, a fillet of fusion, and spices it all up with a hunk of funk that had the capacity crowd eating out of both his hands.

Hand Me Up from the New Ammo album (2014) opens with chunky funky guitar lines straight from the Mothership that swung between major and minor modes, takes a sharp turn into King Sunny Ade inspired rhythms, then detours left into a brief hard rock groove, all anchored to a stealthy minimal bass line. KD interjects on lead vocals and sax, giving the song a linear driving quality, which perfectly matches  the lyrics of the song. At this point Chuck Leavell again took the stage.

Monk Strap, an original tune by DJ Williams was energized by the guitarist’s eclectic, ebullient and groove based approach. Glad, by Traffic was the perfect upbeat vehicle to showcase the veteran performers’ talents, and all were afforded the opportunity to stretch out and solo.  Chuck leavell ,led with the keyboard’s signature riffs, while Karl Denson literally dances behind him to surging waves of music rising and building, then dashes back to the mic to join in the ensemble on sax.

The excitement continued through a medley of Stones and KDTU songs,.  When I get Home was a barn burner with Roosevelt Collier on pedal steel whipping up an infectious toe tapping roadhouse romp. Toward the end of the first set, Taz Niederauer returned to the stage leading the assemblage through a forceful, wailing Statesboro blues.  The set ended with the cover tune, Compared to What, an Eddie Harris, Les McCann tune from their album, Swiss Movement featuring Chuck Leavell on lead vocal and keyboard, which had the audience rattling their glasses on the bar for more. 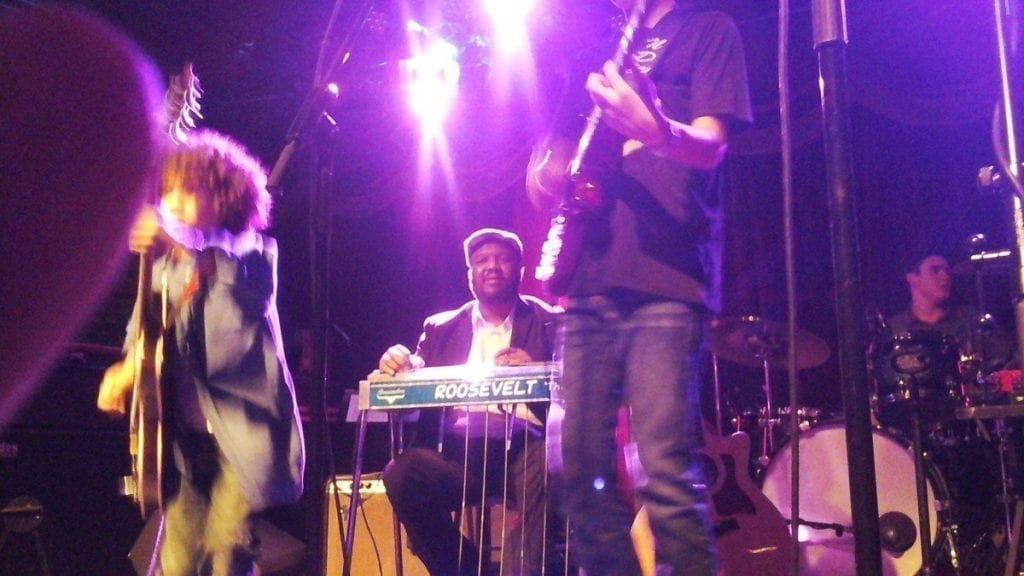 Second set opened with Ruff Tuff, a hot jazz inflected funk key bending fest that featured Karl Denson wailing on melody, slinging syncopations and soul while DJ Williams comped on guitar, and the organ took a turn.. Denson’s solos are exciting, not just for the appeal of his sheer technical power and range, or seemingly endless influences, but, he is the undisputed Master of Momentum. Denson weaves a spell with a musical sleight of hand by including bits of Gershwin’s Rhapsody in Blue, then a verse of Pharoh Sanders, The Creator Has a Master Plan, then struts right back into the ensemble mix as effortlessly and smoothly as silk, and the crowd gives way to some crazy hip shaking momentum on the dance floor.

Running from Danger followed next, with Karl Denson blowing flute with an embouchure and breathy phrasing that called to mind Ian Anderson of Jethro Tull. Several songs from the Stones showcased KD and Chuck Leavell’s partnership in the recent Rolling Stones including an amazing cover of Can’t you Hear me Knocking, the 1971 Rolling Stones Classic from their Sticky Fingers album, which stretched out and included note for the note the uber famous Bobby Keys improvisational solo over DJ’s rhythm guitar. After a spirited Honky Tonk Women, the band ended around 1:15 AM, with Baby Likes to Boogaloo, an exhilarating, feel good, Get Yer Ya Yas Out, rip this joint kind of song, that closed out a fantastic show.

The Brooklyn Bowl is a super great venue to hear music.. The sight lines are good, the acoustics are excellent, the food and drink, inventive, good and reasonably priced. The lighting is sensitive, artistic, and supports whatever musical act is playing.. The waitstaff are very attentive and respectful of the music, and a great time was had by all!

6 When I get Home

7.Can’t You Hear Me Knocking