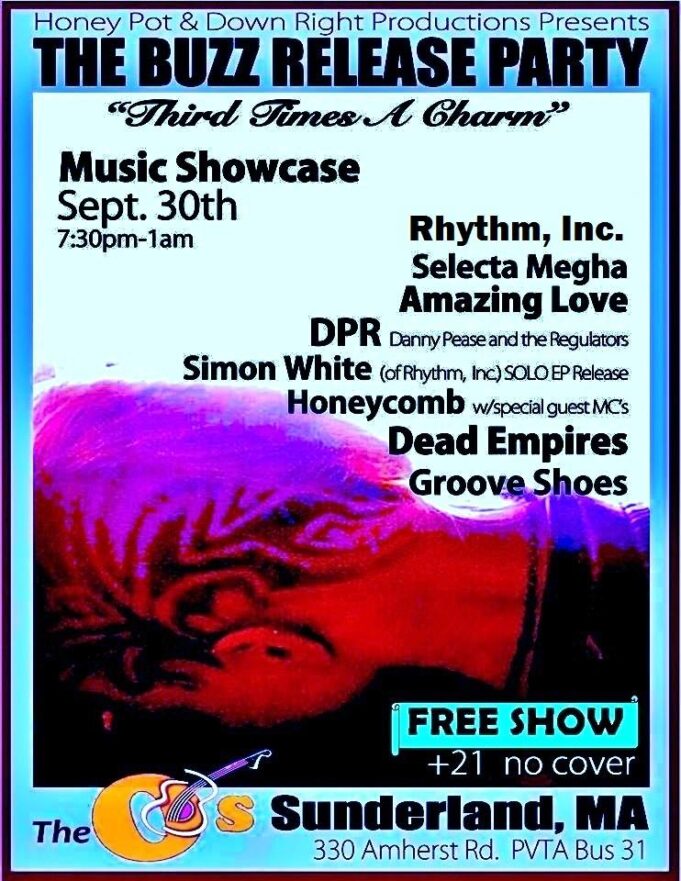 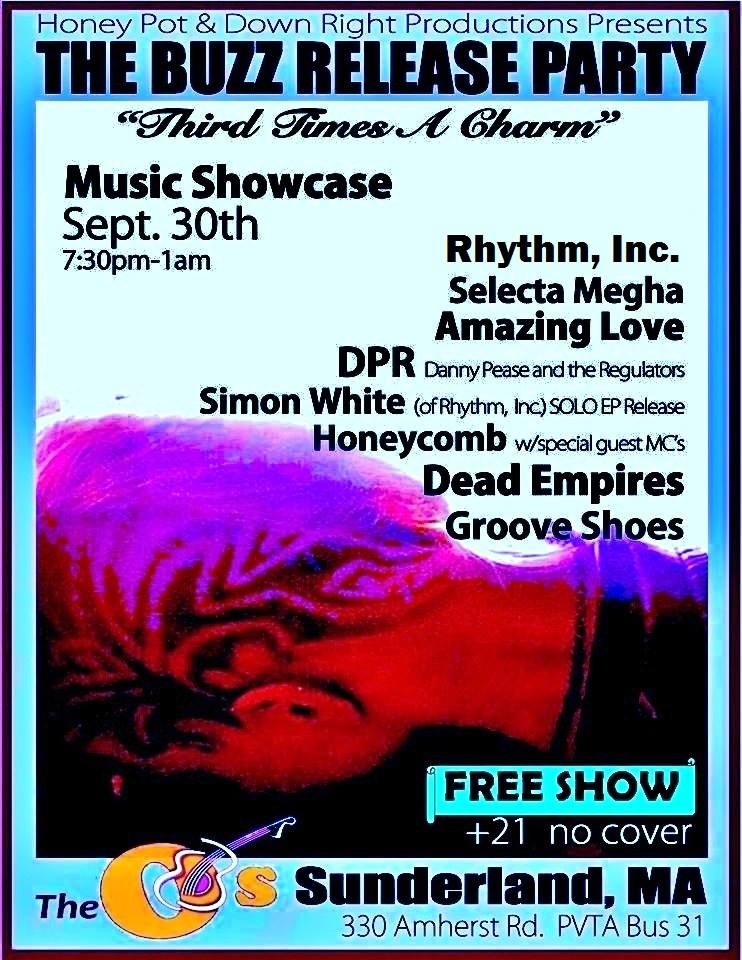 When Jackie asked my friend Angel, and I to go out on a Tuesday night to see her boyfriend, Brian, play guitar with his band Rhythm Inc. at The O’s in Sunderland, MA, I had no idea I was walking into The Buzz’s release party. I was not disappointed.  We arrived around 9:30pm to catch DPR (Danny Pease and the Regulators) in the middle of their set, vibrating the house.  I have to be honest, I spent the rest of their set enjoying the music, but mostly socialized with the ladies, waiting for Rhythm Inc. to take the stage.

I had a lot of time to take in my surroundings since it’s almost 12 years since I had been in The O’s.  Back then it was known as the Seven O’s and since my college days in the 90s and before, it’s been known as a college dive bar.  Not tonight.  The room was packed with 100 people or more, 8 bands on the bill, a “hospitality room” to wine and dine the talent, and a DJ playing between set changes.  It was a great mix of veteran Valley audiophiles, college hipsters, festival rats, bar flies, and Rastas all there to support The Buzz “Third Time’s a Charm” Release Party.  The Buzz’s Mission Statement “We are on a one way mission to rock your face off party people.  Mission control calling the moon and your mama’s house.  It’s time to get down with your bad self!”  Promises just that.

This little ‘zine is in it’s infancy, but with all the great music and venues it can draw on, up and down the Massachusetts stretch of Interstate 91, The Buzz will have no shortage of issue content.  The Buzz so far has features including artist and band interviews, featured stories, extensive calendar listings, press releases for upcoming shows, venues, and festivals, and show reviews and they pull it off with a clean well-designed look and killer graphic content. 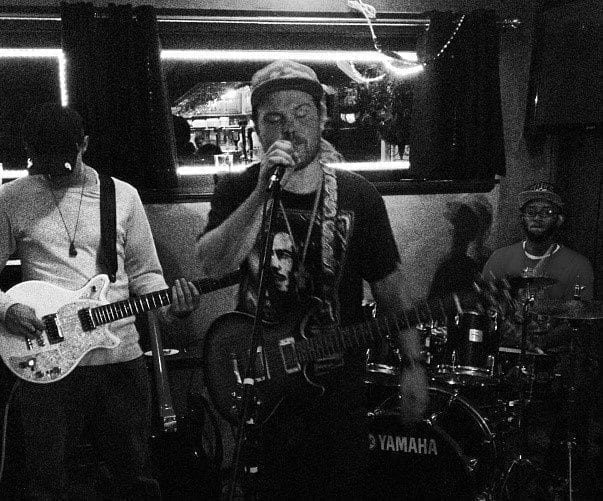 Oh, and did I mention it’s free!  They print about 1,000 hardcopies an issue with an ultimate goal of 10,000.  You can pick up a copy in Turn It Up at the Montague and Northampton locations, Replay and People’s Pint in Greenfield, The Pub and Matt’s Barber Shop in Amherst, La Vera Cruzana at the Amherst and Northampton locations, Bishop’s and Sierra Grille in Northampton, and of course The O’s in Sunderland.   They also distributed 100s of magazines at several music festivals this summer StrangeCreek, Wormtown, Rock and Roll Resort, and Disc Jam to name a few.

But I digress, my real purpose was to catch Rhythm Inc. play their set.  Over the years I’ve been up to the Deja Brew Pub in Wendell, MA on many occasions, again with some of the Ladies, have seen front man Simon White play on many nights.  Occasionally it was a small acoustic set and sometimes it’s been with the full band.  I’m familiar with their sound and know almost all their songs, so I was blown away by the direction Rhythm Inc. is taking with their music and I am not disappointed.

The band started their set with “Got No Money” a song I recognize in Simon’s arsenal of relaxed island rhythms and soulful lyrics.  It was a familiar tune and I found myself bobbing my head as the Ladies and I sat talking.  Then with their second song, “Another Music Man” that island rhythm suddenly found itself morphing with the fresh beats of Giles Stebbins into a new sound that Rhythm Inc. has only just started exploring.  As the lyrics flowed back and forth between Simon and Giles, the band was equal to the challenge with Jamemurrell Stanley on percussion, Kyle Heon on trap set, Joe Cunningham on bass, and Brian DiMartino, ripping it up on guitar and I could hear a lot of hip hop, rap, and funk intertwining with their reggae sound.

Then out of left field, they closed the set with “Way It Goes” a hard thrashing fusion of reggae and heavy metal that took their band to yet another level, proving that they can cross into multiple genres and still make it a signature Rhythm Inc. song.  Just as things were getting interesting the set was done, the DJ started up again, and the boys began packing up for the next Valley band to take the stage.

We didn’t stay much longer after that.  Being older and wiser and waking kids up for school gets in the way of partying on a week night, but I’m excited to see what Rhythm Inc. and The Buzz have in store for the future.  Until the next show – Peace, Love and Happiness, Stephanie Janicedottir

Disclaimer:  The company that owns this website also is a music company, that at times has affiliations with some of the bands in this article.  The company was not involved with this show in any way, just enjoyed it.  We love music, we also make money, get over it.