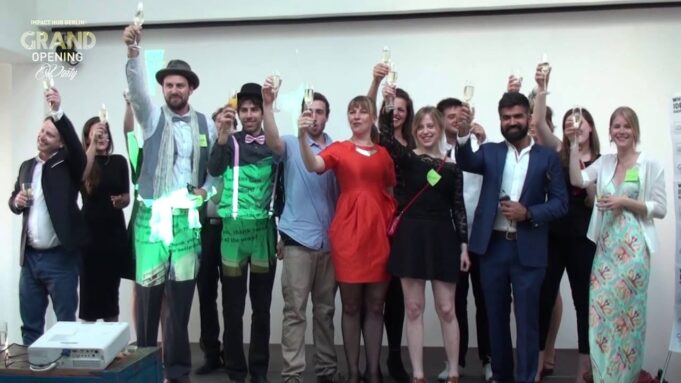 Alec Hutson makes beautiful music.  Armed at present with guitar, ukelele, saxophone, foot-cymbal and loop device plus, one supposes, a few pre-recorded rhythms and percussion patterns (for starters), he produces lovely compositions on the spot.  To be sure, these are “mash-ups” (the artist’s term, albeit applied differently) of improvisation and written material.  Laying sax over looped guitar, then ‘multi-tracking’ the sax, this gets pretty elaborate.  We wouldn’t want to call it complicated; that would belie or distract from the simple and enchanting aural atmosphere.

Alec sings like a skilled artist.  His voice does the work required, showcasing the lyrical content of his originals and his versions.   Now, back to the word ‘mash-up.’  In a few

entertaining instances, the artist will ‘graft’ a number of lines of verse onto a ‘borrowed’ song, challenging the audience to give some sort of sign when they ‘get it.’  A 70’s Kansas song rang familiar pretty quickly, even as Alec began the vocal with his own verse.  When he finished, he announced that the song was “Dust in the Wind Maybe.”

The spontaneous multi-tracking works really well for vocals, as can be imagined.  With words like “sail with me,” the mood and the mode fit as perfectly as the harmonies they carry.  Lyrics sung over all are as poignant as a ballad or dirge ought to be, and chanting or louder vocalizations are especially, almost alarmingly at first, striking.

And what an interesting performance space!  With the look of a study hall or library, Impact Hub Boston, on the 17th floor of this downtown location, makes for a unique and not unpleasant venue.  It’s certainly much quieter than a bar or tavern … well, except for a few folks who, when admonished, make clear whose space it is (theirs) and who the guests are (others)… Then they seem to ‘catch themselves,’ and I confess that “I don’t know how this works,” and we all relax and thank each other.

When Alec calls up his band for the second half, the nearby electric bass and guitar are picked up and put to good use.  After a jazz-pop original, they do a Beatles song- “I Dig a Pony,” of all things.  Far be it from me to come anywhere near a suggestion that anything by that band might be anywhere near less-than-pleasurable, or that such a track could possibly be improved upon, but… well, I wish somebody had a digital recorder right here, right now!

The thing that first struck me about this fellow’s sound and style, playing by himself at The Spot in Providence, besides

being, well, striking, is how very atmospheric it is.  This is no less true with accompaniment.  Striking, atmospheric and beautiful- this how Alec Hutson’s music can be described.  Category-wise, we might suppose it to be jazzy folk-pop, but with enough of an avant/alt-edge and even some Celtic infusion, that the word ‘mash-up’ again comes to mind.  Chatting with another of the resident ‘hosts,’ it is whole-heartedly agreed that this artist and his band should be playing around some of Boston’s theaters and music clubs.

Joining Alec on guitar is Tom Saunders and on bass, Anders Olson.  Alec Hutson’s music can be found on Bandcamp and Soundcloud.  He is easily found on Facebook at Alec Hutson Music and his website alechutson.com.