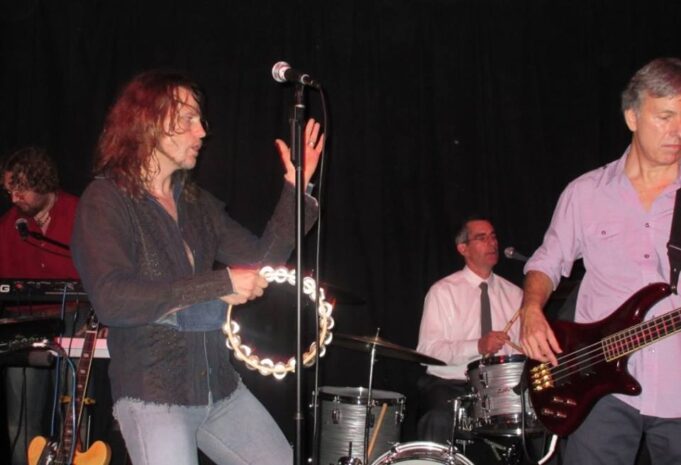 One thing about AfterFab that’s apparent even before they come on stage is that they have done a good bit of homework.  A movie screen at the back of the stage displays an unending succession of images; not just pictures of each of the Beatles, but composites and quotes, albums and artworks, sleeves and singles- all from the solo catalogs of John, Paul, George and Ringo.

From early on in the show, the band asks a variety of trivia questions, too: where was that SONG recorded; what TV show did Paul insist on stopping production to watch; which Beatle wrote that song for the other; and so on.  Also, from chatting with front-man Jon Paquin after the band’s performance at Old 78 Farm Fest, I come here with an expectation that these renditions will stay close to the originals.  Not pretty good, or even fairly close, mind you, but true to the songs as we all heard them on the radio or in some ‘deeper cut’ cases, on the albums.

As near as I can tell, they have nailed it, even down to a little echo in the vocal when it’s right.  It takes six of them to accomplish this lofty ideal, and a hard-core devotee might find points to quibble about, but just considering that four very different singers are covered by the one, with backing from the others, it can be seen that these folks take their mission seriously.

This is not a covers band, as the format allows for no variation or interpretation in the ‘versions’ – these are replicas.  Nor is AfterFab a tribute band, necessarily.  For all their painstaking efforts to replicate the musical material, these folks are not about the visuals.  None of the six looks like any of the Fab Four; they don’t dress the parts; and they make no particular effort to imitate mannerisms or antics.  The instruments, while certainly played to good effect, are not replicas or period instruments- except guitarist Ad Boc’s big ol’ hollow body Gibson, looking just like John’s guitar on Let It Be.  Boc occasionally switches to second keyboard, like on a later song, John’s Watching the Wheels.  He also puts those keys to good use when a song calls for horns or flute, such as for Paul’s Let ’em In.   The singer, Jon Paquin, actually looks a little like 70’s singer-songwriter Roger Voudouris (he of Get Used to It fame).  He shows a good bit of panache, as the central figure should, but he doesn’t seem to hog the spotlight.  Everybody quips and banters between songs, but not overly long.  If anything, Mr. Paquin looks to be somewhat younger than the rest, but that is likely a matter of attitude and antics- he seems the “big kid” type, and charmingly so.

Check out the review of the Old 78 Farm Fall festival which included AfterFab, Adam Ezra Group, Deadbeat, Ashley Jordan and many others.

Jealous Guy has the sound of an interpretive version.  It rather sounds like a ‘what-if’ version of the old band doing John’s 1980 confessional composition, with synthesized strings as if by George Martin, perhaps, and drumming that sounds for all the world as if Ringo had sat in on the Double Fantasy sessions.  The electronics do get a bit creative, in fact, when Bryan Eyeberg lays his hands on the keys, as if this might be a new addition and so still more a work in progress.  Not that it takes anything away from the overall effect, though; in fact, it’s easy to imagine that these may well be the original sounds as encrypted in vinyl and reproduced variously by differing equipment or even mixed differently through reissues and remasters.

Here’s an interesting research question: if the output of all four solo Beatles were compiled and tabulated, either in terms of total vinyl sides or hours of recording, or perhaps just as a matter of hit singles or chart entries/positions, what sort of ratio or proportion might be observed?  The hypothesis formulated herein would propose that this band has made an effort to represent that same distribution, such that tracking their solo Beatle representation will reflect the actual numbers- as, say: Paul 40%; John 30%, George 15% and Ringo 15%.  Come and Get It, the Badfinger hit written and produced by Paul but left in the “Apple Can” until the Anthologies’ release, might arguably represent something of an outlier in our little statistics project.

After a break, the band admits to some scrutiny from the “Beatles Police,” who insist that there isn’t enough George in the mix, and the very question of quantification I’d pondered: “I mean, what’s the ratio?  Three, two, two and one?”  They follow up All Things Must Pass with one of John’s deeper cuts, which turns out to be Hold On from the 1970 Plastic Ono Band album, complete with “cookie” (remember that?)  Then they break into an effective and powerful Power to the People and another 1980 track, Nobody Told Me.  To a listener who pays attention to differences even in Lennon’s own singing, sometimes having as much to do with technology and recording as with his not-so-well-known lack of confidence in his voice, the feat of singing all these songs so well is impressive and admirable.  All Those Tears Ago captures George’s playfulness, too.

What Is Life captures all the energy and fullness of the original, and the vocal is spot-on.  This is followed byMcCartney’s Coming Up which even captures Paul’s hint of hoarseness as in the original.  It seems possible that this band won’t be playing a whole lot of show- the super-human vocal workout must be impossible to sustain for long periods of successive performances.  That shouldn’t be a chief motivator in getting out to see AfterFab though… the best reason is simply that they’re worth it to experience.

Give Peace a Chance is a great encore.  It almost seems like every bit of ‘protest rap’ is replicated; certainly the spirit and flavor of this Plastic Ono anthem are captured.  Everybody bangs a tambourine, with the exception of one guitar, of course, and audience participants are invited to join the band on stage and ad-lib whatever they might like, or stay in their seats and places on the dance floor and belt it out from there.

Disclaimer:  The parent company of this website is also a music promotion and publicity and booking company.  AfterFab has been a client before, but the author has nothing to do with the company, and since we all love live music anyway, we’re not worried about it.  Are you?