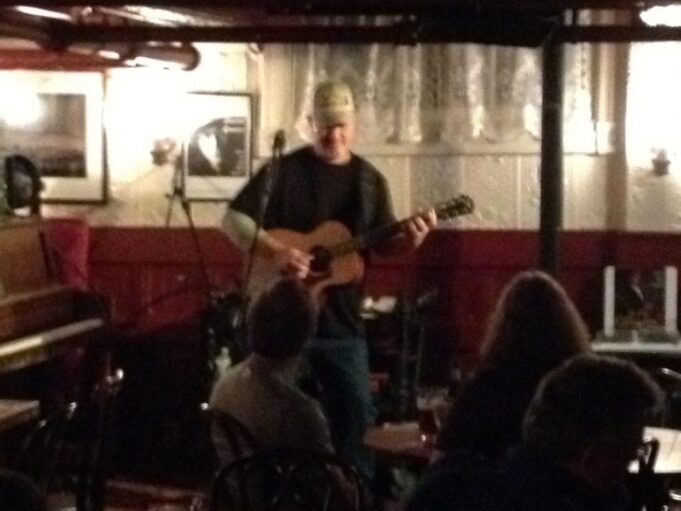 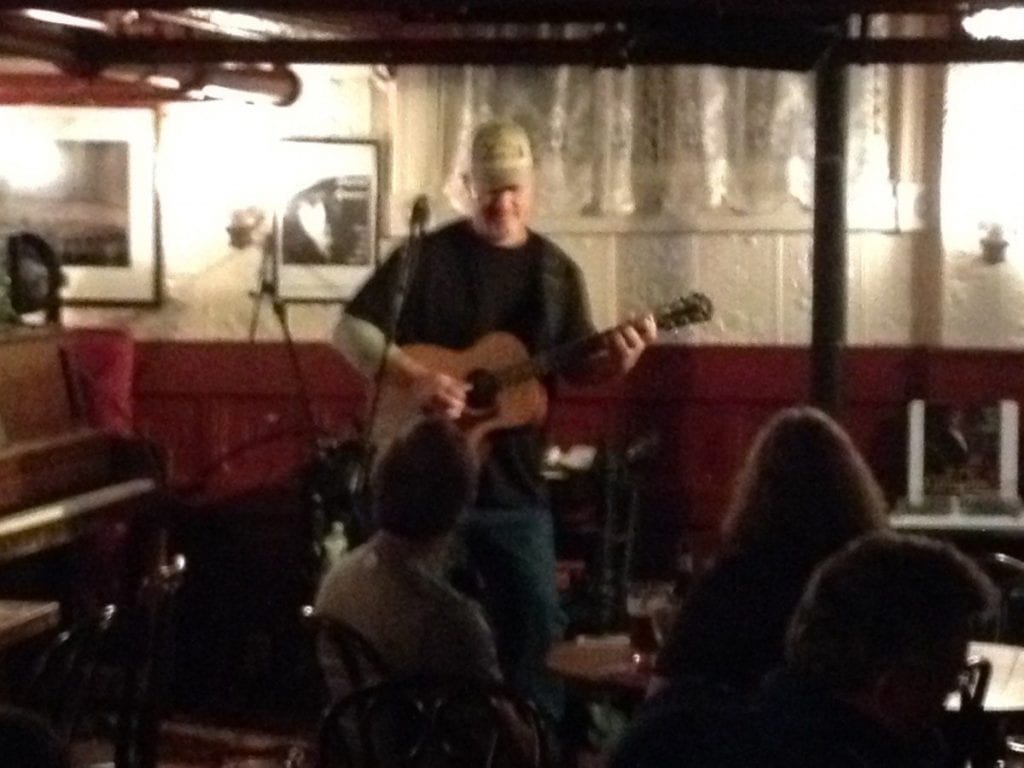 “Eyes alight with glowing hair, all that fancy paints as fair, she takes her fan and throws it, in The Lion’s Den.”

The Lion’s Den, under the historic Red Lion Inn has always been home to live music, with no cover charge, and on Wednesday stopping in for a pint, four fair ladies were working the tavern, with the lovely Jessie Grover behind the bar. Every now and then one finds an unexpected treat, and that was Jeff Gonzales playing a solo acoustic finger-picking bluegrass show.

He opened with a spiritual tune Going Back to Jesus but it wasn’t the lyrics which caught my attention, it was his guitar playing. In the annals of bluegrass there are many gospel type tunes, but this just felt different. He followed with a great breakup tune I’ll be Through With You, getting laughter from the crowd at the lyrics. He was doing something I’ve seldom seen at the Den, engaging the audience. This is a tavern, with pub fare, and people go there for a late night gnosh. The music in general draws attention when polite applause follows the end of a song, and people go back to their drinks, dinner and conversation. Jeff Gonzales was having none of that.

He launched into Will the Circle Be Unbroken, and had the audience singing the chorus along with him, then carrying the tune as he stepped back from the mic. Jeff surveyed the crowd, found a four-top table speaking Spanish, and sang I Found My Home in Mexico with verses in Spanish and English. Smiles spread across the quartet. He closed out the set with Oh Suzannah, with a real bluegrass flair and outstanding guitar playing.

He was open and receptive, mingling with the crowd taking some requests, and getting a feel for the patrons before heading back up to the “stage.” The Lion’s Den is a small room, and there’s a step up platform where musicians play. He opened his second set with Dylan’s Don’t Think Twice It’s Alright. It wasn’t folksy, if there were a floor, it was a danceable tune. Heaven was a nod again to Southern spirituals, and felt like a tune out of “O Brother Where Art Thou.” He again had the crowd singing as he segued into The City of New Orleans. During the first set he said he was inspired by famous Southern Black guitar players, but his playing displayed a technical ability well beyond that. Between sets we discussed music, and how he’s been a guitar teacher for many years and talked about Chet Atkins, Michael Hedges, and Leo Kottke. Which is probably why he extended his chops and played an impressive rendition of Leo’s The Fisherman, to close out the set.

His encore was shall we say, different. He was joking with the older set about how he does gigs in retirement homes and how he’d be playing for them soon when he got there, getting a laugh from the AARP crew. He played a medley of Give My Regards to Broadway the WWI anthem Over There>She’s A Grand Old Flag>closing with America the Beautiful. While This Land is Your Land may have been a better last call, he had people singing and smiling, and departing in good cheer.