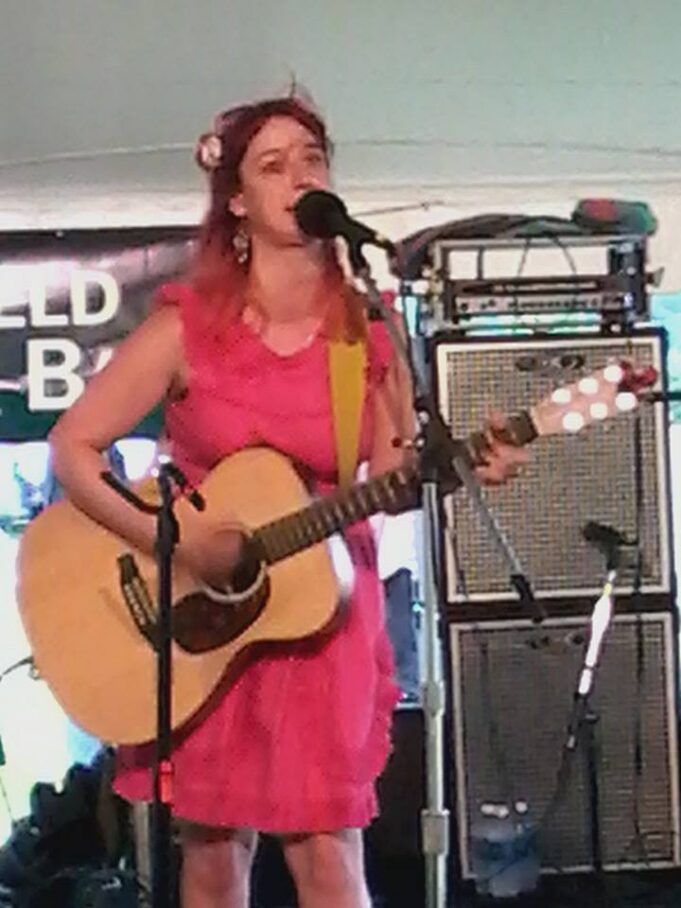 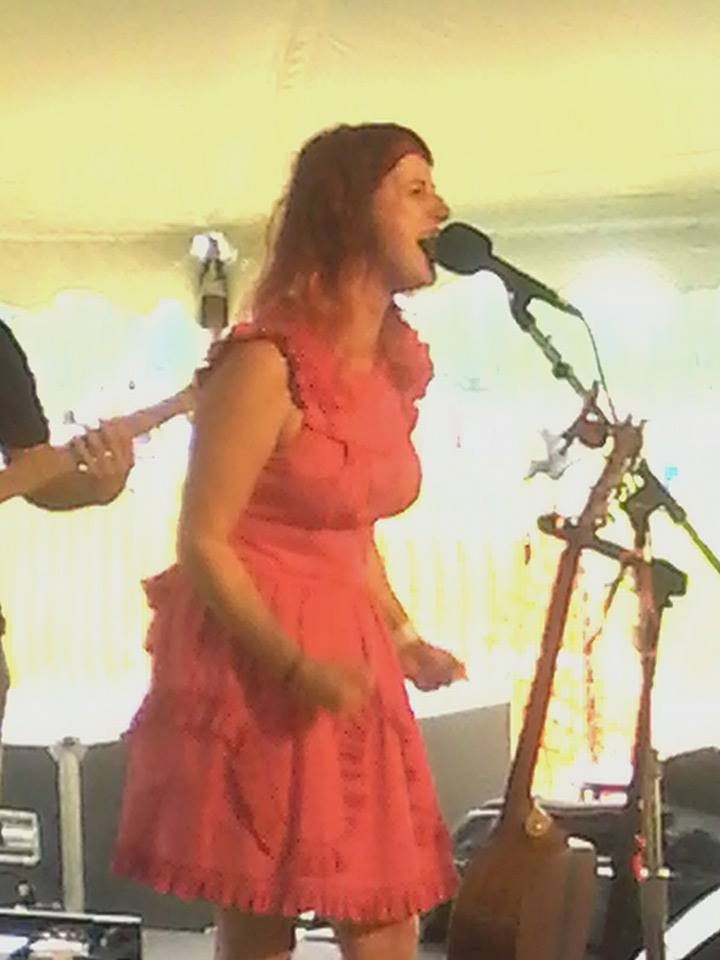 So this is what it’s like to hear your favorite songs live, by an excellent artist with the same band that originally committed them to “virtual vinyl.”  Katelyn Richards managed to schedule her band to play at the Green River Festival.  The famous law firm of Hubley, Boyle & O’Boyle appeared with Her Soundaliciousness on Sunday.

Joe Boyle, reputed to be quite possibly THE preeminent Western Mass guitarist; and John O’Boyle, who I know to be at least one of the area’s very finest bassists; along with drummer and backing vocalist Lincoln Hubley, multi-instrumentalist and Producer of Katelyn’s recordings, came together and charmed a nearly-full tent-load.  One can never be sure whether the folks on hand are there to see a favorite or to check out a new interest, but it looked to me like all were enthusiastic and some new fans were won over by Richards and her band mates..  My limited experience with these festivals (so far) suggests that the pickings are usually slim at these auxiliary stages, so for Katelyn to have pulled in as many passersby and newbies as she did seems worthy of note.  Also, the merchandise table was fairly flooded after the set and into the next act’s first few minutes; this is also unusual by my observation. 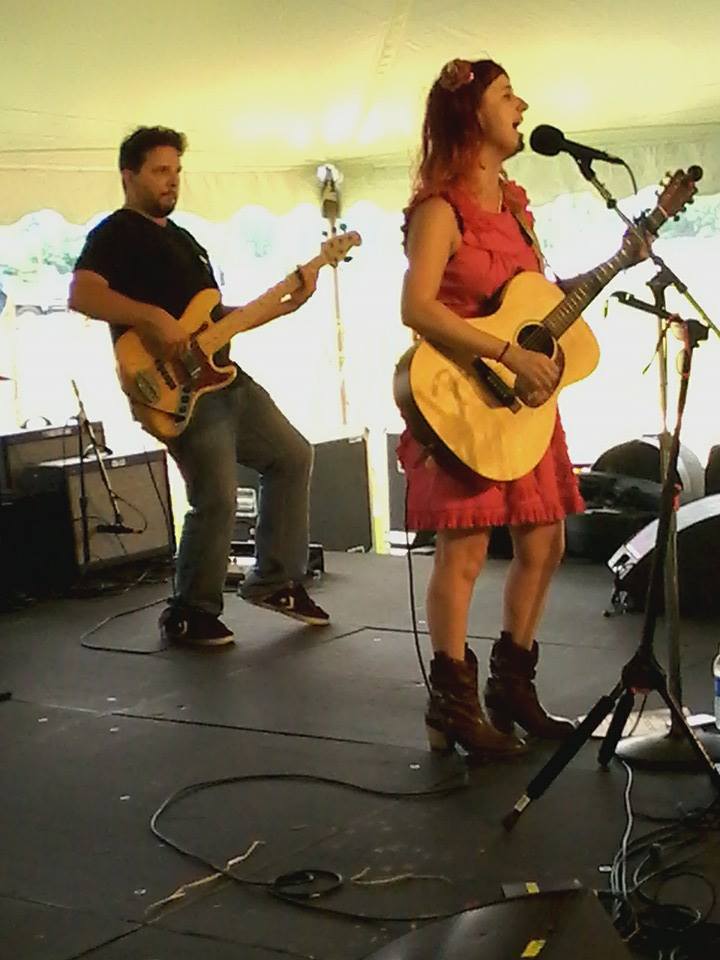 Anyone in attendance can attest to the reasons for all this interest and response: she’s good, real good.  Excellently written songs and superb singing, with such a fine backing band, make the quality easily recognizable.  Interestingly, they did not do all the songs exactly the same as they appear on the record, and somehow this didn’t bother me (I’m easily bugged).  Each treatment, each arrangement and, in particular, all the different guitar phrasings all came together to make the whole thing stimulating and engaging.  Take In a Town Called Holyoke for instance.  That song has, twice now, pulled me in and made me like it when it’s the kind of song I usually wouldn’t enjoy.  The recorded version has an ‘oompa-oompa’ feel, like carny music, but Katelyn’s vocal delivery carries me past my apprehensions and then the story rewards me for listening.  Here, the live rendition is a more straightforward arrangement, easier for the casual listener to receive perhaps, but I find it to be a refreshing retelling.  Pretty much all the songs worked this way for me, albeit each individually.

Watching the band’s interaction was a whole lot of fun, too.  I have seen Katelyn solo a few times now, and I’ve seen her innovative presentation with Lincoln joining on drums and vocals while she plays her acoustic guitar, but I had only ever seen the full treatment once before- and that was my first time; I was still a Soundalicious virgin and hadn’t yet been “smitten by the kitten,” as Eva Cappelli put it.  So this really felt like my first time. I’ve been listening to the CD, “Have Yours Too,” for the better part of a year now, so you can imagine what a treat this was for me.  To be in the company of such a positive crowd did no harm to overall vibe of the day, too. 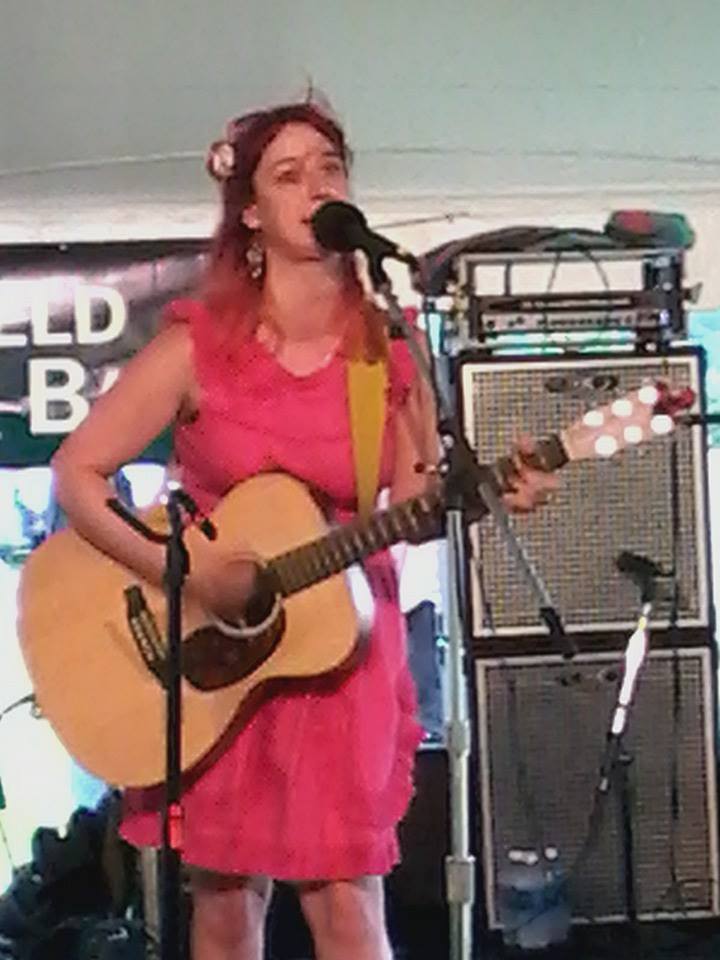 I was struck by Lincoln’s backing vocals, more than usual.  Maybe the extra instrumentation serves to fill out the sound, so that the vocals are that much more balanced.  His drums were just right too, of course.  Joe Boyle’s guitar is pretty near perfect as well.  He sends out searing leads when that’s what’s in order; he lays in sweet fills as they’re appropriate; but the mark of a real expert guitarist is when he adds the right background elements, those atmospheric effects that compliments without taking over.  They’re all over the record, along with Lincoln’s keys and production, but here in the live context is where the test comes.  It’s no surprise, I’m sure, that this guy handles the task with finesse and what might be called grace.  Likewise with the bass player.  He floats. even while he’s rock-solid.  I love that!  It’s a real pleasure when a friend plays so well that you have no concerns over complementing him falsely.  Dig this Johnnie O’Boise dude, he’s a real pro.  This whole band is fully professional and totally smooth, not the least being Katelyn herself.

This review was submitted by Jimm O’D. You can submit reviews too!  Simply email us at [email protected]  Consider the Glory!