(Photo credit David Rainville for photo above) The 4th ever Old 78 Farm Fall festival had more people than ever but still maintained its small fest vibe throughout the day.  Kids activities, home grown food and bands all day long on two stages highlighted a perfect day of weather at the Old 78 Farm. 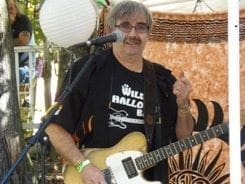 The property is nestled in the hills on the northern edge of MA, within a short drive to both NH and Vermont but still somehow in the middle of nowhere.  The little festival vibe doesn’t mean though that there wasn’t a big festival level of quality to the music-  bands from locals like Wildcat O’Halloran Band and Melanie and the Blue Shots to regional powerhouses like Hot Day at the Zoo and Roots of Creation kept the music going non stop from noon until nearly midnight.

The gates opened at 11 AM with vendors getting set and people streaming into the small hobby farm.  Wildcat O’Halloran Band opened things up on the Warwick stage and he came out smoking. 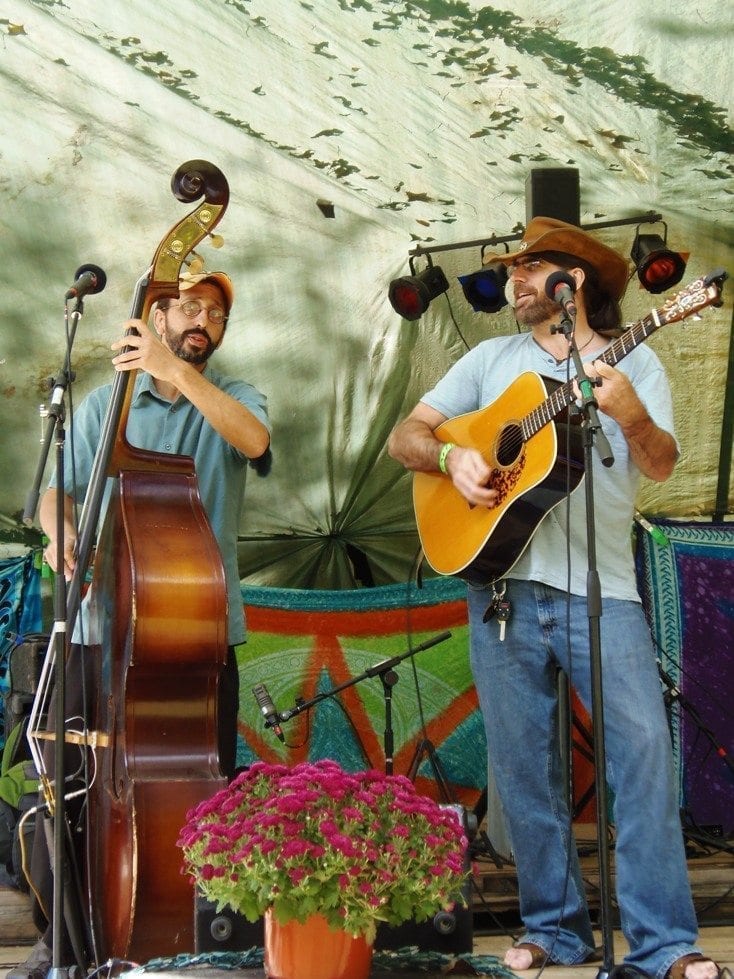 Statesboro Blues by the Allman Brothers Band was scorching and was immediately followed by Jimi Hendrix’ Fire. What followed was a combination of blues and r&b in Wildcat’s style, and both Wildcat and his other guitar player taking turns trading hot licks.  He brought up a great harp player to do a little Stormy Monday and together they had a great set to open the festival.

Adam Ezra Group came for their fourth appearance at the Old 78 Farm Fall fesitval, and as is their wont, it was yet another different style of performance.  First year they opened up the festival as a duo, second year they headlined with a full band, third year they were mid day also with a full band, and this year they came as a four piece:  Adam on guitar and vocals, 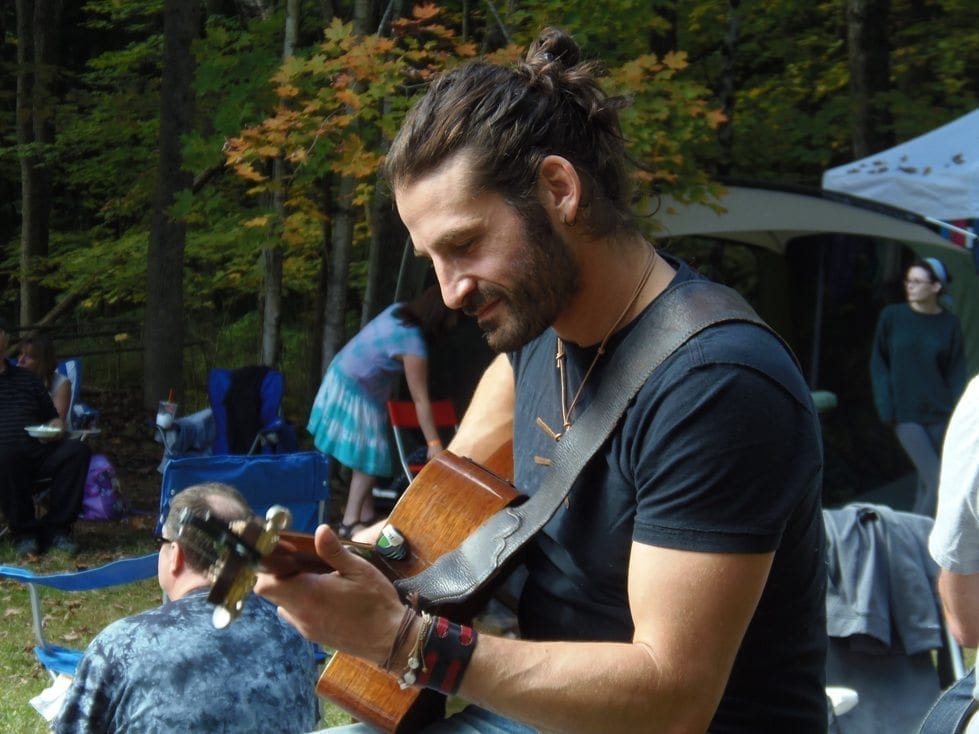 Corrinna on fiddle, Turtle on percussion and Alex on drums-  but this time they set up completely acoustic in the middle of the concert field to conduct a thirty minute sing along.  No electricity, the band was completely run on vibes and crowd appreciation.  The set was short but included some AEG originals as well as cool covers including Tom Petty’s Freefallin and Merle Haggard’s Mama Tried made popular by the Grateful Dead.

Next up on the Warwick stage was hometown band Melanie and the Blue Shots making their second appearance at the festival.  Filled with musicians from the area, they laid out some great blues dance music and had the locals hootin and hollerin.  Mixing traditional blues vocals with guitar, a solid rhythm section and great saxophone, the Blue Shots maintained their strangle hold on the Warwick music scene.

People were good and ready for Start Making Sense on the main stage.  The band performed the music of Talking Heads and went “deep into the catalog” as one attendee put it. 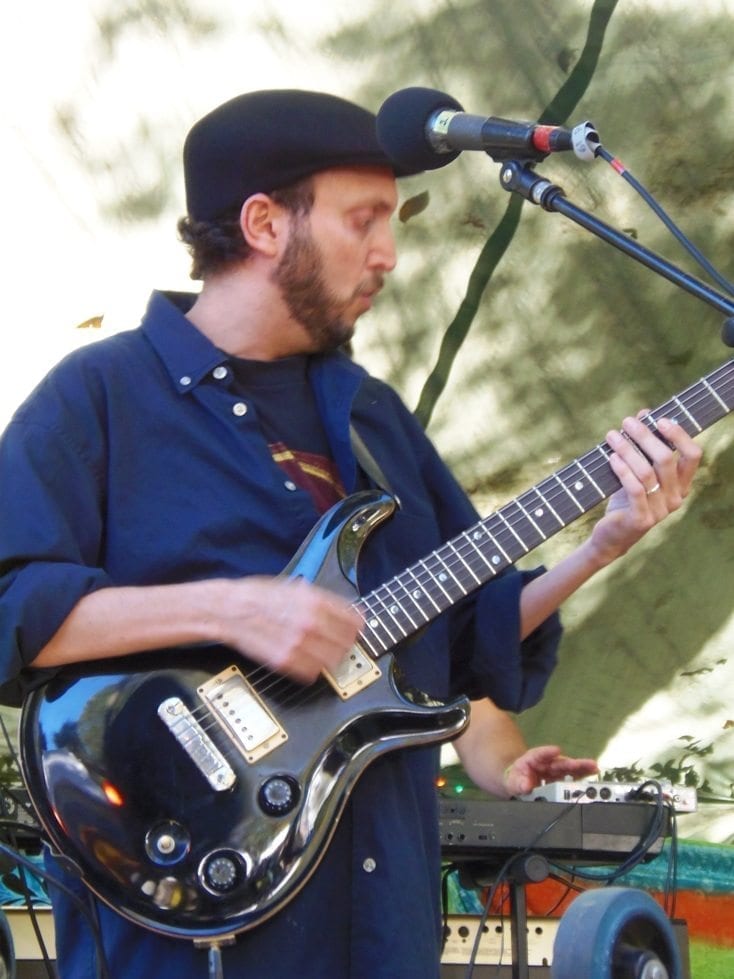 Cuts from classics like Nothing But Flowers and Burnin Down the House to obscurities like Crosseyed and Painless and Cities got the crowd moving and Start Making Sense were a highlight for most folks.

The real surprise for me, and I’ve seen SMS probably a half a dozen times, was their encore.  Jon Braun, the band’s lead singer, announced that they had recently formed a band called HmfO in which they  paid tribute to some heroes from their home state of PA.  They launched into an example, and Hall & Oates’ classic I Can’t Go For That ended their amazing set.

Up next on the Warwcik stage was local bassist Eric Engman and his band Mr Noizy and the Sparkplugs.  Their sound continued the vibe of blues, r&b and rock that had been consistent on that stage, and the veteran players really showed their stuff.  The set concluded with a great version of the Bob Dylan classic All Along the Watchtower.

The main stage saw Boston music award winners Girls Guns and Glory return for a second straight year.  The band brought a potent mix of americana, classic country, retro rock and even a little bit of jam to their set.  Having already visited Jerry Jam this summer, the band learned a thing or two and brought classic versions of the Grateful Dead’s song book to the party including Not Fade Away, and others.  But instead of playing the Dead versions they went more to the original versions that match their musical style.  Their polished sound and American roots vibrations were the perfect way to transition from afternoon to evening as during their set the lights came on and the tiki torches were lit.

Another set from Mr Noizy and the Sparkplugs on the Warwick stage followed the second raffle of the day, where the hosts were sure to distribute wares from the farm to the crowd.  The band was more comfortable in their second appearance, and continued to wow the crowd with their energy and flare.  Not many of the folks there had seen the Sparkplugs yet, but surely their reputation was spread by their sets. 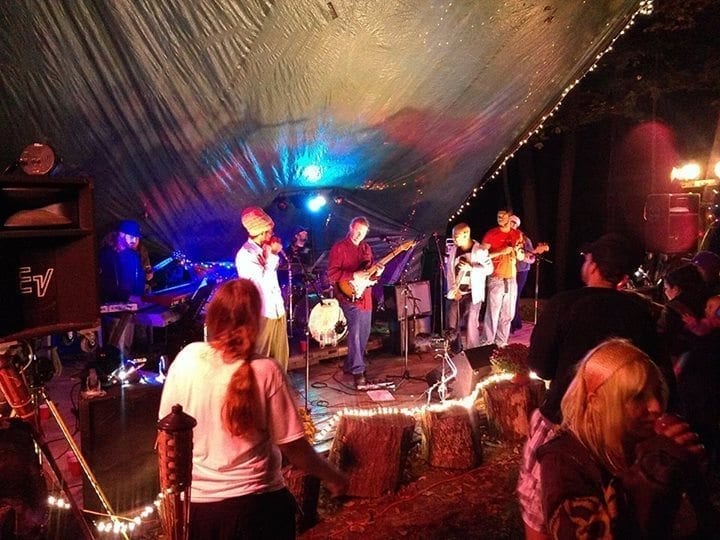 Up on the main stage a band was formed:  the Alchemysfits.  The band consisted of several members of the Alchemystics, a local favorite including Demse on drums, Jason on keys, Force on the microphpone, Mike on bass, and Matt on guitar.  Matt typically is the percussionist for the Alchemystics but showed off his skills on guitar on this night.  The band was joined by a variety of local reggae and hip hop talent including Simon White from Rhythm Inc, Highah Seekah from Lion Bird Sound system, Catalyst from the Problemaddicts, and Fox.  Brett Wilson from Roots of Creation joined on lead guitar at times as well.  The band put out an enticing mix of classic and original hip hop and reggae, and the audience was treated to a performance that likely won’t be repeated anywhere.  With the band formed on stage and never having performed publicly and with no schedule to do so again, Old 78 was able to put out a band that was completely unique to the day.

Finally Roots of Creation took the stage.  While the instruments were being set, a quick performance 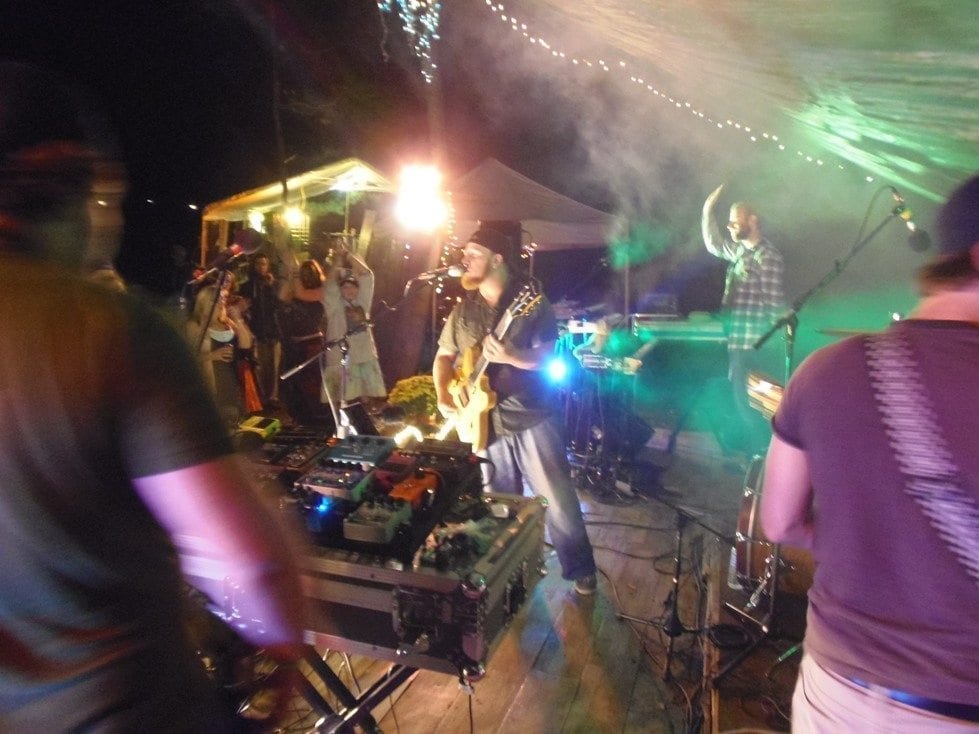 by DJ Carmen of Dragon Fire and some of the audience members doing fire performance was another unannounced treat.

Roots of Creation took the stage on fire themselves and threw down nearly two hours of amazing music.  Mixing reggae, rock, funk, jam and dubstep into their own music and culture, Roots of Creation were clearly amazing.  The crowd stayed and rocked out with them, and the energy really came to a peak.  As they were nearing the end of their set, they were joined by Force from the Alchemystics and we have included some video of that performance below.

Brett Wilson raged on both vocals and lead guitar, Tal Pearson colored the sound on keyboards, Mike Chadinha laid down both grooves and hard hitting accents, and the rest of the band helped to create the vibe for which RoC is known, and was the perfect ending to a long day of music at Old 78.

Check out some Roots of Creation with special guest Force from the Alchemystics on the mic.