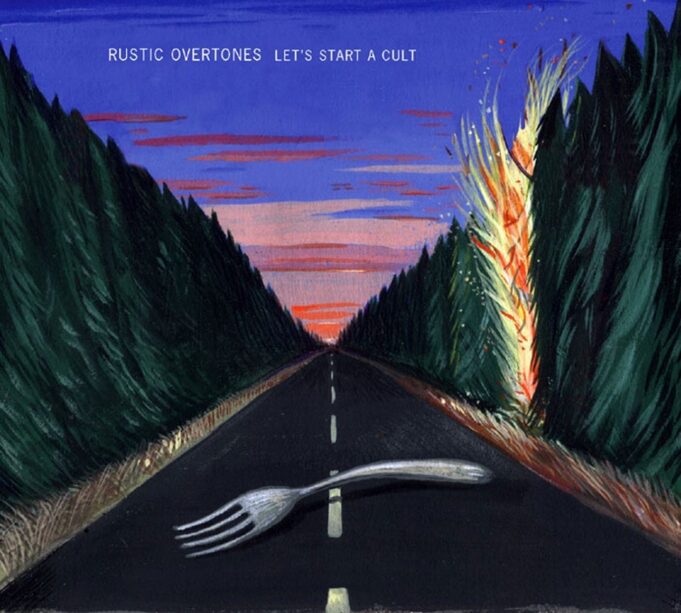 An interview with Dave Gutter.

Rustic Overtones has built quite a following over the years, and they plan to continue that trend with their latest release, Let’s Start a Cult. This is the band’s first release since 2009’s New Way Out.  That album was a heavily layered album with lush orchestration and production. New Way Out received some very favorable reviews but the new release will be a bit of a departure from that record.  Let’s Start a Cult represents a totally different approach, a record that packs more punch into a shorter piece of work.  The eight songs total about 30 minutes in length.

The band is currently slaving away at creating the artwork that will accompany the album, but from a recording and mixing perspective the project is complete.  With a little luck, the album will be ready for release in time for their show at the Port City Music Hall in Portland Maine on June 21.

The eight songs on Let’s Start a Cult blend together lyrically, as singer Dave Gutter took a concept-album approach to the song writing. Fans will experience a more up-tempo, stripped down sound to Rustic with strongly psychedelic elements.  But it is not just the regular over used psychedelic sounds that we associate with classic psychedelic bands like Pink Floyd or even their more modern counterparts like Radiohead of even Wilco’s trippier releases.  The sounds on Let’s Start a Cult range the gamut of early psychedelic sounds, at times evoking a Mad Men style cocktail party as in the title track, or into the more fundamental and dark I Like it Low.

We caught up with Dave Gutter, lead singer and principal songwriter for both Paranoid Social Club and Rustic Overtones to discuss the new work, how it came about, and all of the grittier details behind current band life:

LMN&R:  Where did the inspiration come from for “Let’s Start a Cult”?

Dave Gutter: The sound of “Let’s Start a Cult” was inspired by the psychedelic music of the 60’s and 70’s.  It seemed appropriate because of the underlying themes of revolution, love, and camaraderie. Also the idea of a “concept album” seemed like a good platform for more classic production.

LMN&R :  How do the songs tie in together as a concept album?

Dave Gutter: The concept of the lyrical content is based on a metaphor for starting a band and promoting your music to likeminded people. A band is nothing without its fans. It is a rollercoaster ride of highs, lows, disappointment and euphoria. The concept came to life early in the writing process when our drummer (Gary Gemitti) asked me what I was writing in my notebook; I jokingly answered “our Grammy acceptance speech”. The band was going through some tough times and all the songs had this theme of hope and affirmation. I soon realized that what I was writing resembled a self-help book; an idea that sadness should not be shunned but used as inspiration. I then began focusing more on the specific parallels in the songs and created a conflict. That conflict was selfdoubt and the main character worshipping his girlfriend more than himself. In the end his followers (fans) remind him that heartache will only make him stronger and that he is not alone.

LMN&R :  Musically, how does this record differ from the last album?

Dave Gutter:   “Let’s Start a Cult is much more stripped down production wise than previous albums because this is the first album that we produced, recorded and mixed ourselves. Vintage drums were recorded with fewer mics, and horns and backing vocals were recorded more often in sections- rather than overdubbed, and all tracks were bounced to reel to reel ¼ inch tape to mix. Some drum tracks were recorded with a Tascam 8 track cassette recorder. Most of these production choices occurred when optimum gear was not in working order or someone wanted to get an idea recorded quickly as a demo. Most of these makeshift sessions ended up on the final version of the record.

LMN&R :  Is this album more similar to any of your previous records?

Dave Gutter:   This record is unlike records we have made in the past, although I feel like that could be said for all of our records.

LMN&R :  You’ve mentioned that this album has a psychedelic feel to it – how so?

Dave Gutter:   Saying a record is psychedelic to me, is a matter of opinion. One man’s harsh may be another man’s mellow and vice versa.  I will say that the production we strived for was very influenced by obscure psychedelic albums. Whether it hits the mark depends on the listener I guess.

LMN&R :  Have there been any additions to the band that fans need to know about?

Dave Gutter:   This is the first record we have made with the addition of Gary Gemitti (drums and percussion) and Mike Taylor (Keys, and vox). Gary and Mike also play in a project called The Royal Hammer with Dave Noyes and Ryan Zoidis. We have all been fans of both musicians for years so the chemistry clicked right away.

Rustic Overtones are gearing up for a whole host of quality shows both in clubs and at festivals in the coming season.  The album will be a welcome release for fans who have been clamboring for a new release.

Read the review of the Rustic Overtones New Year’s Eve show from 2010-2011 here.