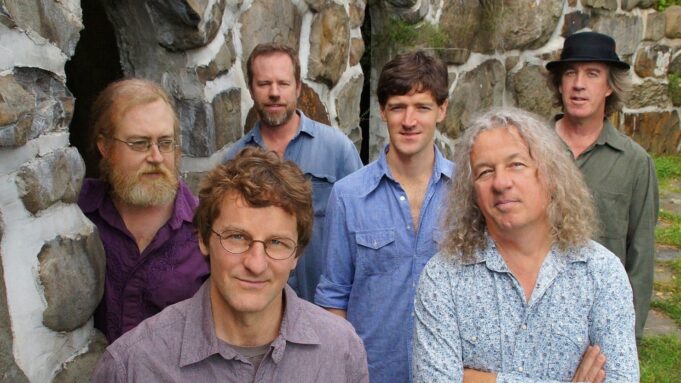 Railroad Earth took the stage at The Town Ballroom in Buffalo, NY on Thursday March 14th. Railroad Earth is one of the leading bluegrass bands in the scene today. Hailing from New Jersey, with over ten years under their belts, this band truly puts on a one of a kind show. The band members interact with each other in such an amazing way, allowing one another to add the perfect amount of their own styles to create this unique experience. The band seemed quite happy to be in Buffalo, all taking the stage with smiles and getting ready to dive into the first set.

The first set has started and we were welcomed with a beautiful version of “Storms,” off of The Good Life album that was released in 2004. The band didn’t wait a minute before diving into “Magic Foot,” driven by fiddle player Tim Carbone. This one truly had the crowd groovin’ to the music. Next came the original song “Elko.” This song has some amazing lyrics with a catchy refrain that the audience helped to sing along. At this point we were all settling in and knew that this show was going to be a barn burner. Again taking the speed up a notch the guys broke into “Drag Him Down,” off of Bird In A House. “You Never Know” was next, a song about not knowing all that is going on, and even though something seems like it is real, it may just be a show. One of the best songs of the set was next, “The Cuckoo.” This version stretched out over eight minutes long, and took us to the next level of excitement. The band didn’t seem to want to let anyone down and quickly transferring into Hank Ballard’s song “Tore Up Over You,” made famous by the Jerry Garcia Band. Having the crowd singing along and the band smiling as wide as possible, the show kept going. We were then treated to a wonderful take on “Crossing The Gap,” and ending the set with “Bringin’ My Baby Back Home.” What a set so far, the angst awaiting the second set to begin has started to sink in!

Railroad Earth has taken the stage and the second set was about to start. Hoping for some songs off of our favorite album Black Bear Sessions, our wishes were granted. “Seven Story Mountain” opened the set up, and man oh man was it a doozy. This version was one of the best I have ever seen or heard from these guys live. Coming in at over thirteen minutes in length, this version is a must listen for any Railroad Earth fan. Next came another song off of The Black Bear Sessions, “Chains.” “Chains” is a lyrical masterpiece describing the growth of an individual who has overcome a lot but ends up being the same person he never wanted to become. This is a major reason in which I love this album so much, the lyrics and playability are just phenomenal. The guys weren’t done there, we got yet another tune from the same album, “Lordy, Lordy.” An upbeat number that had us all dancing.

Slowing it down a little bit, “For Love,” was next and showed the diversity in which this band could play. Keeping the same pace “Hunting Song,” followed “For Love.” This song showed off multi-instrumentalist Andy Goessling’s talents as he played the flute, and by this point he has played five instruments during the show. Todd Sheaffer’s vocals and lyrics are a major part of Railroad Earth’s magic, and “Mighty River” was excellent. A monstrous sixteen minute “Head” was next, another song off of The Black Bear Sessions. Again this is a must listen from the show if you are a fan of this band. Closing out the second set “Wayfaring Stranger” was started, and it seemed like the audience was very happy about the selection. This great take on the old religious hymn was outstanding, which morphed into one of my favorite new songs from Railroad Earth, “Hard Livin’.” The band left the stage and returned shortly for a single song encore. “I Ain’t Got No Home” was the encore and made me feel like getting back on the road and seeing the world. All in all this was a great show and one of the best live performances I have seen by these guys. Do yourself a favor and check this band out if they come to a town near you, they won’t disappoint.

check out some of Jason’s other reviews including: