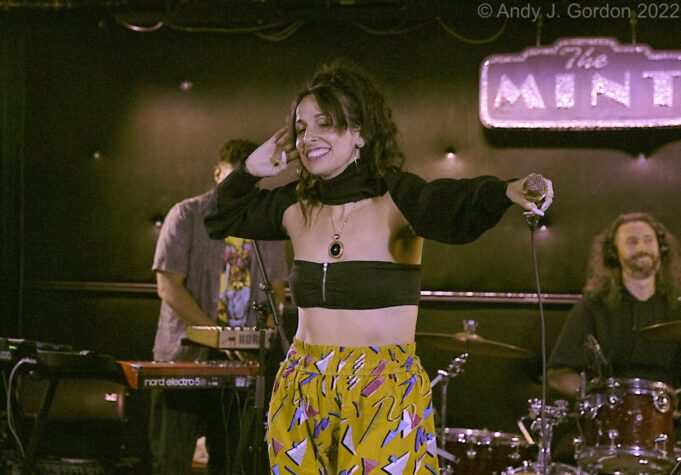 A lot has happened to Shira Elias in the past couple of years. She left her popular funk band Turkuaz, moved to Los Angeles and got married. Clearly the pandemic has inspired her to make changes. Now she is embarking on a solo tour in support of a soon to be released EP called “Services.” She kicked off the tour on November 3, 2022 at The Mint, an intimate club in her new hometown.

Elias built a solid reputation as a powerhouse vocalist with Turkuaz. She, along with most of her bandmates, decided to leave that group in 2021, essentially dissolving it. Elias has been busy since then, captivating audiences by playing with original Talking Heads member Jerry Harrison and touring member Adrian Belew as well as guesting on gigs with The Motet. In 2020 she released a solo EP called “Goods” and her new EP will be available on December 2. The Mint gig provided Elias with the first opportunity to test out some of the new material in front of an audience.

Elias was joined onstage at The Mint by her new spouse Joel Fuentes, who goes by the stage name Mega. Fuentes produced both of her EPs and during the live show played the MPC, a sampling device that contained backing vocals, classic song snippets, crowd noise and other audio effects. Rob Walker, the bassist from The Main Squeeze delivered thumping rhythms. Quinntin Smith played keyboards and Matt Vorzimer, who uses the stage name E cussionist, played drums. The Motet’s trumpeter Parris Fleming sat in for a cover of Buddy Miles’ “Them Changes.”

Elias and her gifted band played five of the six new EP tracks during their set. Each song demonstrated Elias’ amazing voice and range as well as her high energy stage presence. “LSD” is a funky R&B tune that got all the booties in the house shaking. “Hook’d” is the first single with a super, funky bass line and a soul inspired vibe. Rob Walker played an amazing solo during that song. “Toxic” is a pretty R&B tune. “Earth Sun” is a soulful ballad that will be released next week as the second single. “OK” is another ballad that showcased Elias’ passionate and soulful singing.

The band mixed in several rearranged covers that gave a clue about the types of music that have inspired Elias. The Black Crowes “Hard To Handle” was reimagined as a funkier tune with a few imaginative mash ups thrown in – a bit of TLC’s “Waterfalls,” a pinch of Prince, a dash of The Spice Girls and “O Canada,” plus a double dose of Aretha Franklin’s “Rock Steady” and “Respect” – each got the crowd fired up.

Elias went back to The Spice Girls for “Say You’ll Be There” and encouraged the  audience to sing along. She said, “when I was a girl in my bedroom, I’d sing this into a hairbrush. Thank you for letting me live out my fourteen year old fantasy.”

Two more classic covers made the end of the show a raucous sing along. Elias put a ton of energy and vocal power into “Billy Joel’s “Movin’ Out (Anthony’s Song).”

The set closer started with Quinnton Smith teasing a familiar piano riff. After a few moments, he launched into the recognizable notes for Elton John’s “Bennie And The Jets.” Elias belted out the lyrics and did a call and response with the crowd as the band played a superb version of the song.

Elias has a lot going on since departing from Turkuaz. Her guest appearances with Harrison and Belew covering The Talking Heads catalog will continue through 2023. She’ll also be reuniting with several of her former Turkuaz bandmates as Cool Cool Cool for set opening gigs on that tour. With those shows, the release of her excellent solo material on the new EP and her dynamic live solo shows, Elias is poised to gain even more fans. Making changes and taking chances seems to be paying off.