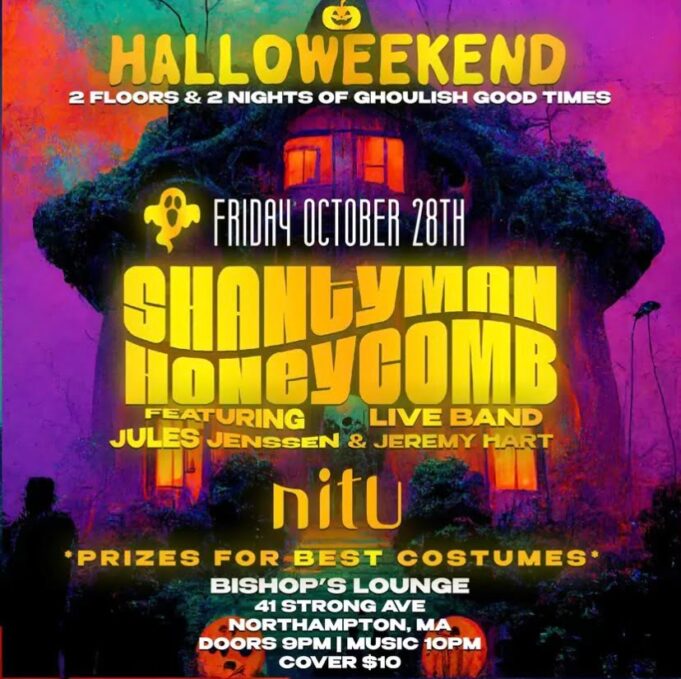 Be it purple lumens or dissonant chatter, Bishop’s effervescence draws in the people of The Valley it does not repel.  For those of us who enter, a fruity haze of vaporization hits you like a train, before it permeates the hood of your sweatshirt.  A hip jump and slop away, quasi-costumed characters mingle. Are they costumed… or am I? The inexplicably backpacked wander in rhythmic circles. Backpacks. Full enough to store our collective baggage. Meanwhile the music ferments; guitar licks and absentminded riffs bubble to the surface and eventually drown the din.  The show has begun.

An almost unrecognizable tribe of gnomes imbues the sounds of psychadelic funk. It’s Shantyman on Halloween and we were sonically transfixed before we knew it. The journeymen with mics are shrouded in eclectic red headgear. Did the lights change or did my conscious perception? “These guys are fun” I shout in the ear of my pseudonymous co-contributor. Anyone who is everyone is here. The classic, Werewolves of London, possesses the barman to practice his mixology in step.

The cloaked bass player can hardly see, oh but he can play don’t worry. He pulls down a fake beard only to reveal a real one. He tools his instrument in the foreground of prop ivy, which lines the walls where anyone in attendance would be agreeable to see festival infrastructure. The cymbal smasher is comparably ungroomed. So too is he other-wordly.

The first keyboard solo is played with a look of pure concentration, before a man suited in scrubs who’s dancing wildly. Next to me a pretend pirate with a real skull tattoo bounces his head to the rhythm of a wooden plank at sea. Together we swab a deck of jammy interludes and cascading melodies.

Next, a trifecta of show going witches enters to a slow jam. Is there a method to conjure up a ten dollar cover? The music is some potion, maybe they know it. In contradiction to the witches’ black ensemble, a sanguine pallet of strobe light cuts through the billow at entrancing intervals. There is more to do upstairs but not for me. It’s all to do here amid the beer footprints of funk-stunned brains. We’ll stick from here to there: a sword, a bandana, a mascot, a distorted guitar in overdrive.

The blinded bassist cannot be located on the quantum continuum. A nobleman on a mission struts past to just the right tune. The Shantymen are having their intended effect on head bobbers and limb shaking lamb-chops. Fool heartedly, I spend an intermission trying to devise a plan just in case someone asks what my costume is. I settle on Pork Delaney.

After the quartet returns from space, the captain frogs his drink in a gulp. During the ensuing transition jam, the coveted, and now shirtless, drummer beckons solos from his fellow gnomes. Alas, the strummer of taut strings harmonizes with the master-presser of mechanical keys. Shantyman is rhythmic through and through.

This isn’t my first and it wont be my last show. I think to myself before planning my early exit, for no reason other than to make this here record of things. They burst into a cover of Prince, “1999”, but they play it like it’s twenty-two hundred. Mere moments after it ends I collide with the crisp air of the world outside of Bishops. Inside, an unusual cast of characters wades through good fiction, insulated from the accumulation of capital.