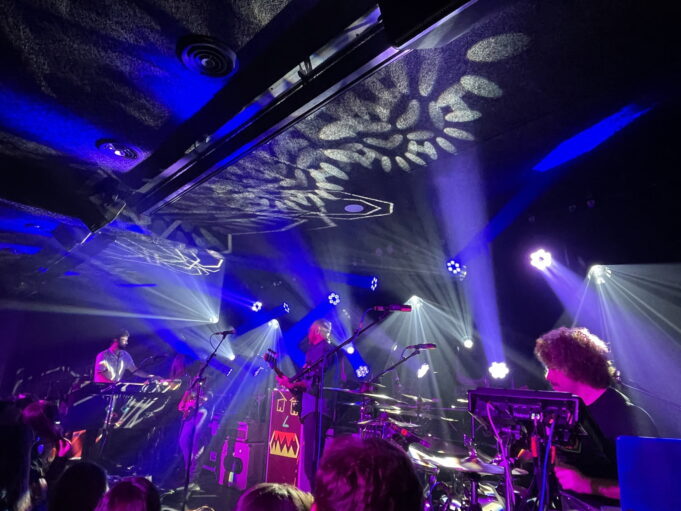 The mighty improv-rock band Dopapod rolled through Columbus, Ohio on 11/11 & 11/12 for a highly-anticipated 2-night run at Woodland’s Tavern and it was beyond insane. Both nights were sold out and the band delivered two nights of stellar music for the record books. Before the opener on night 1, the room was already packed & full of excitement. This band is revered here, and us fans in Columbus love that Dopapod has made a tradition of coming to Woodland’s for multi-night runs.

Chalk Dinosaur of Pittsburgh, PA opened up night one of Dopapod’s two-night run at Woodlands Tavern. Chalk Dinosaur occasionally performs as a solo or duo act, but tonight we got the full-band treatment. This band is a ton of fun if you’re into climactic, upbeat jamming.

Then came the time for Dopapod, who quickly got things going with Numbers Need Humans off their album, Emit Time released in 2019. The anticipation in the crowd was next-level, and you could feel just how everyone in the crowd was buzzing for their Dopapod fix, myself included.

After these two nights, I wonder if this might just be one of the best bands on the planet.
They are just so deeply talented and they play as a unit so well. Out of all of the times I’ve seen this band, it sounds as if they are in sync now more than ever. There really are so few improvisational bands out there who are on the level of Dopapod.

The engine of the band is Neal “Fro” Evans on drums, and he is an absolute beast on the kit. His ability to transition in and out of funk grooves and complex-feeling prog-rock beats keeps everyone guessing & dancing, and really drives the band. And then Chuck Jones on the bass is the perfect counterpart to Neal. He never overplays and simply keeps an infectious groove going for hours on-end. I feel like Chuck & Neal are so strong as a rhythm section because they play with perfect timing and a strong understanding of what needs to be there, and what is excess.

Musically speaking, Eli and Rob are some of the most entertaining musicians that I think exist on the planet. One of the things that I think makes Rob so great, is it feels like he is always egging the other guys in the band on to fully go for it. He’s either doing that, or he’s completely annihilating a solo or call-and-response with someone. It’s obvious how much musical attention-to-detail Rob has, and his playing conveys emotion so clearly. Then Eli, Eli is likely one of the best improvisational keyboard players in the world. Maybe the only way to describe his phrasing and use of effects is by calling it mind-blowing.

At times, music can feel very predictable, but that’s never the case with Dopapod. These guys’ commitment to staying locked in as a unit, not following a script, and pushing each other to explore… I feel that that’s what sets them apart and is why they are a band people travel to see for multiple nights in a row.

I: Numbers Need Humans, Velcro, Hi Doggie, Test of Time, Off the Cuff, Bats In the cave, Brain Dead

On night 2, Dopapod welcomed fans to “DinnerWithDopapod”, an improvising & socializing soundcheck pizza party for fans who wanted to come early. Then, Colin Miller & Brother Nature from Cleveland opened the night up in incredible fashion.  Colin Miller’s voice can make the hair stand up on the back of your neck, and this whole band is equally great. Colin Miller & Brother Nature is a soul-funk-r&b group that is not to be missed and sounds like one day they could be a total hit.

After Colin Miller & The Brother Nature, Dopapod came out to an amped-up & eager crowd. The band opened with Zonk and then went into one of their greatest hits, Mucho. Things were hot from the very start and the entire room was elated as Dopapod stoked the fire into their patented, disgustingly-funky improv jamming.

Towards the end of the first set, the band brought out Guitarist & DJ Yessman – Craig Broadhead of Collin Miller & Brother Nature (and formerly of Turkuaz.) At one point during this jam, the band all faded out until it was just Craig and Rob going back and forth on guitar to a silent room. This was truly unbelievable and you could tell that everyone, including the people on stage, were absolutely loving it. As if things couldn’t get any better, the group then escalated from a funk improv to a heavy rock/Black Sabbath version of Bertha by The Grateful Dead. This whole thing was so incredibly creative and completely blew everyone’s minds. After this, I’m not sure I’ll ever hear a more perfect cover of any Grateful Dead song.

The band came out for their second set and got things going with Building a Time Machine before going into one of the top highlights from the whole 2-night run – an unreal rendition of Trapper Keeper. It is amazing how comfortable the band is with each other, and how at any given point, every member of the band usually either has a stank face or is laughing in amusement at what each other is playing. The night continued on in epic, scorching fashion as the band capped off the second set with a fan favorite, FABA.

It seemed like the crowd continued to get more & more energized as the night went on. It felt like these shows went by in the blink of an eye, even though the band played for hours each night. After the second set, Dopapod encored with the Ween song, Happy Colored Marbles, and then went into the vigorously funky song, Please Haalp.

There is no question that Columbus absolutely loves Dopapod. If this band had made the run 3, 4, or even 5 nights, I’m sure that each night would’ve been greatly appreciated by their fan base here. This band is unbelievably talented and over-delivers to an extent where it’s almost absurd. I know the second their next dates in Columbus drop, I’ll be marking my calendar!

^Grateful Dead cover performed in the style of Black Sabbath

%contained Let’s Get it On quotes from Rob