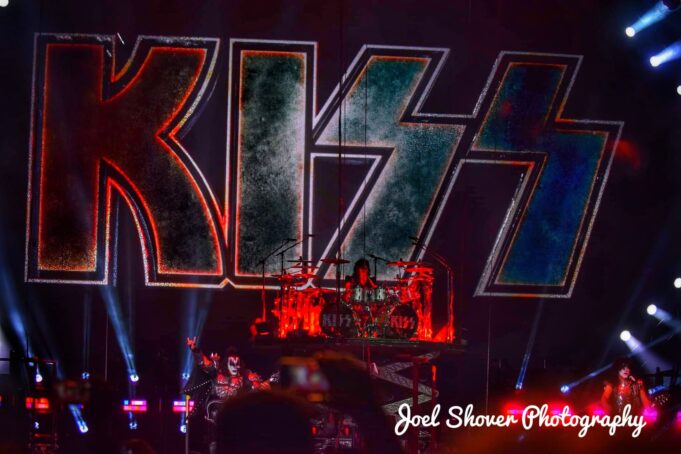 As mother nature tried once again to thwart off the KISS concert for the third time, the God of Thunder and his bandmates had bigger and better plans in store for this sold-out crowd at Live Nations IThink Amphitheater in beautiful West Palm Beach Florida on Wednesday September 21st, 2022.

As the crowd was gathering into the venue a spectacular display of South Florida Lightning was giving the fans some déjà vu when they were told to go back to their cars and wait the storm out. I could only wonder what was going through Paul Stanleys mind as that storm rolled through!  The storm did pass and we were ready to have our heads rocked by the OG gangsters of rock concerts, KISS. Let’s face it concerts wouldn’t be what they are today if KISS never pushed the envelopes they did! From pyrotechnics, special effects, and aerobatic moves to the theatrical makeup on stage a KISS concert has it all, not to mention its own KISS ARMY! Now here we are in West Palm at “The End of the Road” Tour. Could this really be the last KISS tour?

KISS is the most iconic rock and roll band in history, playing in nearly every city in every country on this planet which means they search high and they search low and all around to find the Master Painter David Garibaldi. Garibaldi was chosen to be the opening act for the North American and European legs of this world tour and he mesmerized the crowd with his unique artistic ability to create sun intricate upside-down paintings with such ease. For Tonight’s show Garibaldi painted a rendition of Lady Liberty and then the 4 faces of KISS both to be auctioned off for charity.

Some fans had donned their own face paint and it was obvious that we were all about to be transformed back to our childhood, and from the of ages of some of the fans, their childhood was about to be shaped as we all waited patiently for the hair-raising words….

“ALLRIGHT WEST PALM BEACH!  YOU WANTED THE BEST, AND YOU GOT THE BEST…. THE HOTTEST BAND IN THE WORLD……. KISS”

The curtain dropped and the booms and bangs were off. With massive fireballs exploding from the stage the Band descended from the sky to “Detroit Rock City” as we all Got up and Got Down!  The heat didn’t stop there as the night’s just begun and we’ve found the fun with the next classic “Shout It Out Loud”.

After 3 long years and 2 attempts, Paul “Starchild” Stanley finally greeted the West Palm Beach, Florida crowd. A short but sweet greeting where he said, “There’s more rain on the way. So, let’s not waste any more time.”  The demons were now set free and it was time to watch them fly with “War Machine” from the 1982 album Creatures of The Night. I’m sure its Cut’s like a Knife that today, is the day you found out Bryan Adams wrote that song! Another big hit from the 80’s for the band came next with “Heaven’s on Fire”. There wasn’t enough rain in South Florida to cool the IThink Amphitheater down as KISS continued to play and when KISS plays, they “Love It Loud” and with lots of fire!

Gene “Demon” Simmons was in exceptional form this evening and really ready to rock the house. The Demon showed his fire breathing skills to the tranced South Florida crowd. How do you cool a hot mouth after that you may ask? With some “Cold Gin” of course! a song written by former member Ace Frehley.

Lead guitarist Tommy “Spaceman” Thayer showed he had a lot of booms and bangs in his guitar solo with not one or two, but three different firework explosions coming out of his guitar! Talk about your high heat makeup, I was sweating in front of the stage. These guys make it look so easy! The band regrouped as The Starchild spoke to the crowd once again to introduce another great song, we know from the 80’s about living your life to it’s fullest “Lick it Up”.

Starchild had more to say for the next song about a sickness and how it was time to call in the DR. The Demon screamed out a “Oh Yeah” because even though he’s full of sin, in the end you’ll let him in! it was “Calling Dr Love”, the first step of the cure is a KISS.  A KISS concert is a large gathering of all walks of life, like a circus, or perhaps more like a “Psycho Circus” as the sold-out crowd rocked harder and harder with every note played as they chanted “Here we are, we are one, we’ve been waiting for this night to come!”

What a welcome to the show we were about to get now as the “Catman”, Eric Singer, showed off his incredible drumming skills with a huge solo that led us into the famed “100,000 Years” from the fourth album titled: Alive! Released in 1975 it was the live album that paved the way for all other live albums by any bands that you hear today! OK enough KISStory (I had too!)

A concert just isn’t a concert unless the band unleashes the bass player, in this case KISS has unleashed The Demon. I have seen KISS many times since the early 80’s live and I will tell you this is the MOST demonic I have ever seen The Demon as he spit blood all over the stage. (To the kid with his dad in front of me, I hope your nightmares weren’t that bad). Simmons took us into some depths of that bass cavern that only a demon would know. Out of that bass cavern Simmons would emerge the “God of Thunder”, and let’s not forget Rock and Roll!

The crowd knew there was no place for hiding, and no place to run when Paul Stanley pulled the trigger to his “Love Gun” as he flew across the amphitheater to a second stage platform to see the rest of the KISS army on the lawn. Paul “Starchild” Stanley danced and swayed as he flirted through the crowd with KISS’s take on Disco with the classic “I Was Made for Loving You”.

“Out on the streets for a living, pictures only begun, your day is sorrow and madness, got you under their thumb” “Black Diamond” was the signal the show was coming to a close. As every fan in the stands grabbed their cell phones some to take pictures and some to call home and say they’d be just a few more hours. “Beth” was the classic piano-based song the crowd was waiting for all night, or was it?

The Starchild had more philosophy for the West Palm crowd, Money can take you far, you like the hotels and fancy clothes, and the sound of electric guitars, but….” Do You Love Me” The final sing-along-song of the evening, what???? I can’t hear you!!!!  I wanna “Rock and Roll All Night” and party every day!

I truly believe KISS really wanted to give it all tonight with this performance and they really left nothing behind. I truly got to remember what a great time it was growing up with KISS! Thank you, Gene, Paul, Eric, Tommy for this epic opportunity to photograph and review my childhood idols!

Encore:
Beth
Do You Love Me
Rock and Roll All Nite