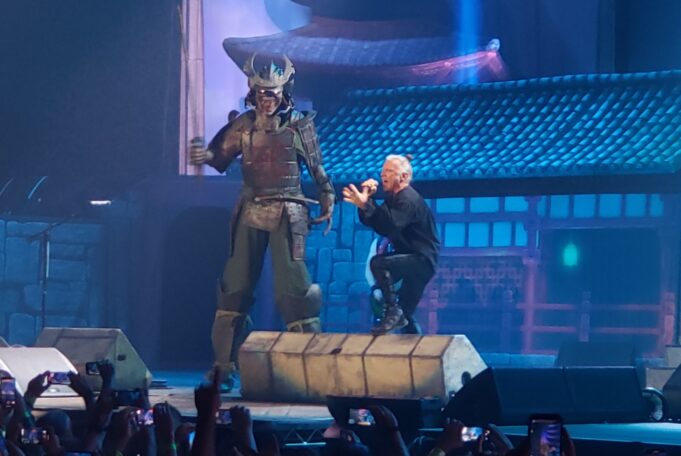 It’s hard to pinpoint exactly when, but somewhere in time, perhaps as Iron Maiden has approached its fifth decade together, it happened.  Always a band for the people, Maiden has become something a bit surprising for a group of English lads chanting the number of the beast.  If its sold-out, second of two nights at Anaheim’s 18,000-seat Honda Center is any indication, Iron Maiden is a band these days, as well, for the whole family.

Husbands and wives, moms and dads with pre-teen children, ladies and their gentlemen on date-night- (virtually) all in black Maiden concert tees- settled in for two hours of musical and literal detonations; the most entertaining show in town, Disneyland included.  Even as Maiden’s operatic maestro of a lead singer, Bruce Dickinson, took gentle aim at the host city and a certain cartoon mouse (“Where is Anaheim?  Somewhere between Mexico and Seattle.”), it only heightened the sense of irony; Dickinson and Disney as competitors.  Who would’ve thought?

With no less than seven different stage set-pieces supporting and illuminating the equally explosive musical content, Iron Maiden’s performance was the pinnacle of heavy metal theater.  Whether an opening, Japanese-themed locale illustrating the band’s latest and terrifically progressive album, Senjutsu, or the two-story stained glass panels and glowing cross for the shift into theological mayhem, or Dickinson flashing dual flamethrowers or sword-fighting with the band’s inimitable and enormous mascot, Eddie, Maiden’s attention to visual phantasmagoria is undeniably unsurpassed.

Still and more importantly, it is the music, really, that makes this a concert worth the trip from Brazil, or Mexico, or the UK, or Chile- yes, as Dickinson and the accompanying stage cameras pointed out, there were Chileans in the house.  Maiden remains as sharp- save for a turbulent start to “Run To The Hills” late in the show- and as musically ambitious as ever.  The triple-threat guitar armada of Dave Murray, Adrian Smith, and Janick Gers slings bolts of lightning.  Bassist Steve Harris and drummer Nicko McBrain roll cannonballs of rhythmic thunder.  And ever the sly master, the four-letter wordsmith Dickinson leads the charge, whether outfitted as a leather-clad Shogun warrior, or graveyard creeper, or 19th-Century militiaman.

The first three songs of the night mirrored Senjutsu’s first three; the capacity house singing every word.  From there, the set dipped into each era of Iron since Maiden’s 1980 debut album, drawing waves of cheers for the classics; “Revelations” beginning the onslaught.  On “Flight of Icarus,” Dickson strapped into the aforementioned flame pack, lighting the space above him in ten-foot streams of fire.  For a raucous “Hallowed Be Thy Name,” he toyed with hangman’s noose.  Launching into the encore, a blistering run of “The Trooper,” he fended off Eddie and raised in victory both Old Glory and the Union Jack.  And, with the final blitz of “Aces High,” thwarted an actual stage crasher with even more ease, and maybe even a grin.

Peerless, Iron Maiden is both the survivor and the savior of progressive English metal’s most prolific and successful period.  What makes the group such a mammoth and enduring success is the obvious love the relentless sextet has for its fanbase.  It’s a love that ensures, each night, the tens of thousands that pack stadiums and arenas across the globe are treated like family.

The Writing on the Wall

Fear of the Dark

Hallowed Be Thy Name

The Number of the Beast

Run to the Hills

Encore 2:
Churchill’s Speech (from tape over the PA)