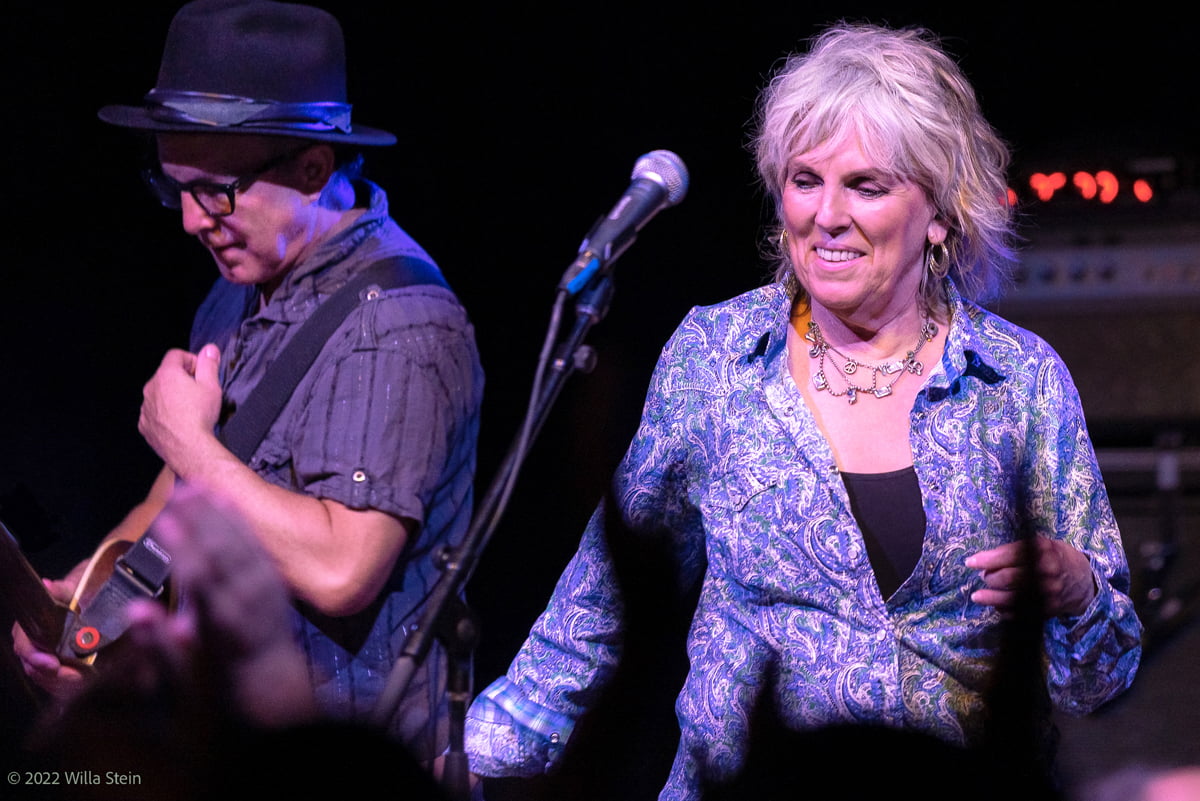 Words by Wilfred Bailey and Photos by Willa Stein

Following a sold-out Sunday show, Lucinda Williams and her all-aces band, Buick 6, brought the love once again to Haw River Ballroom Monday night.  Jesse Malin and his band–keyboardist Rob Clores and guitarist Derek Cruz–opened for the second straight night with the subdued, but brilliant “Brooklyn” from his 2003 solo debut album The Fine Art of Self Destruction.

Sounding much bigger than a three-piece all night, Malin and company played a 9-song, 45-minute set that included a Pogues cover (“If I Should Fall From Grace With God”), a tribute to fellow D Generation band-mate Howie Pyro, who died this year (“Shining Down”), and “Room 13,” a song co-written by Lucinda and Tom Overby–her husband and manager–from 2019’s Sunset Kids, which was co-produced by the duo as well.

“She Don’t Love Me Now” and “Turn Up The Mains,” a pair of songs from 2015’s New York Before The War, were highlights from Malin both nights, as was the opening track off Sunset Kids–“Meet Me At The End Of The World Again.”

Playing off the extended back and forth between Lucinda and the crowd from Sunday night on how to pronounce “Saxapahaw,” Malin brought the name up early in his set, and ultimately paid tribute to all indigenous peoples, and those from “these parts especially” with Neil Young’s “Pocahontas.”  Malin ended his set by asking Clores and Cruz what they thought, quickly adding “pretty good for a place you can’t pronounce!”

A longer set break than the previous night allowed Monday night stragglers to fill up the ballroom before Lucinda and Buick 6, her backing band for well over a decade, took the stage.  Buick 6–guitarist Stuart Mathis, bassist David Sutton, and drummer Butch Norton–is now augmented by the familiar face of Doug Pettibone on guitar and pedal steel.  Fans will remember Doug’s eight-year stint as Lucinda’s musical director in the 2000s, including his work on the grossly underrated Live @ The Fillmore album released in 2005.

Throughout the night, Lucinda’s self-proclaimed two “badass guitar players” traded licks and picked out simultaneous, complementary leads effortlessly, and Pettibone and the core Buick 6 trio looked and sounded like all four of them have been playing together for years.  It was also clear they were having a blast doing so.

Opening with the title track from 2011’s Blessed, Lucinda (no longer playing guitar on stage) and the band started nice and slow, built a sweet groove, and then exploded at the end, setting the feel for the entire evening.

Despite not being as talkative as Sunday night, Lu laid down the gospel before “Big Black Train,” a song from Good Souls Better Angels, an album released in April 2020 as the country shut down; an album Lu feels “fell through the cracks.”  With a nod to Tom Petty, Lucinda’s “own way of talking” dares the audience to listen–really listen–to this shit-stirring, self-professed “radical” with the healing-est voice in all the land.  Can you hear what she’s saying through the sweetness?  “I am a radical.”  She says it plain and simple–just like that.

“There’s plenty of money in this country,” Lu reminds us before laying down the facts: all that military money should go to caring for people with mental illness, education, and community arts.  “I can’t help” saying this stuff she says apologetically.  “I still carry on the ideals and philosophies of people like Woody Guthrie…the rich get richer, the poor get poorer…smash the corporations…I’m a radical.”  And with that, the “Big Black Train,” a song about depression, left the station…and it smoked along the tracks.

“Are You Down” from Essence, the 2001 album she co-produced with Charlie Sexton, was a mid-set barnburner both nights, with all three guitarists perfectly intertwining licks, and Lucinda encouraging Pettibone, then fully becoming one of us, turning her back completely to the crowd and reveling in the awesomeness that is Buick 6.  Her focus turns to the band in its entirety, then over to the rhythm section, stage right, and then finally solely on Butch and the drums…Lucinda is enjoying her band as much as anyone.

For the second straight night, “You Can’t Rule Me,” the opening track from Good Souls Better Angels was dedicated to the United States Supreme Court.  Can you hear what she’s saying through the sweetness?

During lock-down Lucinda did six themed streaming shows called Lu’s Jukebox, the first of which was a Tom Petty tribute.  She pulled a one-two Petty punch this night, with “Stolen Moments,” a song she wrote not long after Petty’s death, and “Changed The Locks,” a song from her eponymous 1988 release that she wrote, and Petty and the Heartbreakers covered for the She’s the One soundtrack in 1996.

Following the always-welcomed “Honey Bee,” from 2008’s Little Honey, the band left the stage for a few short minutes, before returning to close out the night with a cover of the Allman Brothers Band’s “Not My Cross To Bear,” and the signature “Joy,” a set-list audible called in place of “Get Right With God.”

When Lu says “I’m a radical,” it’s simply a statement of fact.  As is this: every Lucinda Williams show is a gift.  All told, over two nights fans were treated to 36 songs, 29 of them different, with only 7 repeats.  And the better news lies in what Lu told us when she returned from the encore break: “we always come back.”  Let’s hope it’s soon!