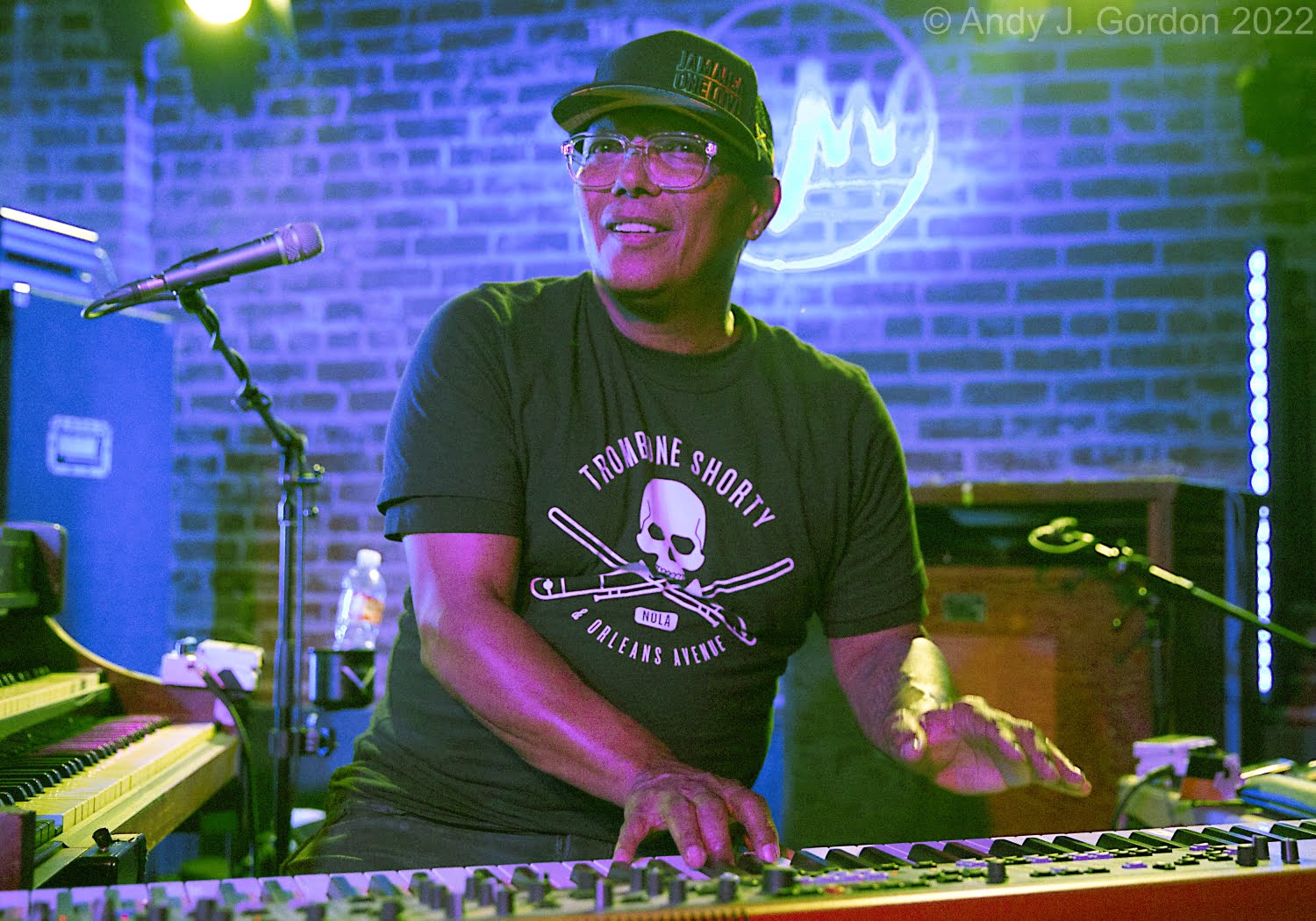 Dumpstaphunk is one of the premier funk bands out of New Orleans and they are in Los Angeles for a huge show at the Hollywood Bowl as part of Trombone Shorty’s Voodoo Threauxdown tour. Before that performance, Ivan Neville booked a warmup show on August 7, 2022 at The Venice West, an intimate club in Venice, California. The show was billed as Ivan Neville & Friends, but it was really a Dumpstaphunk performance that had all the elements of their usual shows – pounding funk and soul based songs with excellent vocals, harmonies and instrumentation. The knowledgeable and dedicated crowd ate up every minute of the nearly two hour show.

Although there was much speculation about which guests might show up for the gig, no one seemed disappointed to see “only” a stealthy Dumpstaphunk performance. Ivan Neville is the centerpiece of the band and has been for all of their nearly twenty year run. His amazingly creative keyboard forays and distinctive, powerful vocals were on full display at The Venice West. Bassists Tony Hall and Nick Daniels III added chest thumping rhythms and soulful vocals to the mix, while Ian Neville delivered innovative guitar riffs. Drummer Devin Trusclair pounded out powerful beats and a three piece horn section consisting of Alex Wasily on trombone, Ashlin Parker and John Michael Bradford on trumpets played innovative horn arrangements along with inventive solos.

Unfortunately, the show’s lighting was a disappointment. The musicians were back and front lit with an unpleasant array of purples, greens and reds, while the horn section was in nearly complete darkness, making it difficult to see any of them. In spite of that distraction, the musical performance and sound were great.

The show consisted of several songs from their deep catalog along with noteworthy covers. Trombone Shorty’s “Fire and Brimstone” got things rolling with passionate vocals from Ivan Neville and excellent solos from all three horns. The band has always used music to comment on social justice issues and their set included one of their oldest, most powerful songs called “Living in a World Gone Mad.” They also played the title track from their 2021 release “Where Do We Go From Here.” Ivan Neville introduced the song by saying, “If we can just love each other just a little bit more, in spite of all the bullshit.” He and Nick Daniels sang enthusiastically before Ivan launched into a sweet organ solo that was followed by a beautiful Wasily trombone solo.

Trusclair played an explosive, rapid drum introduction to “In Time,” another track from their 2021 album that is a successfully reworked cover of a Sly and The Family Stone song. The tune had a deep bass line, fine horn accompaniment and sweet harmonies. “Dancing To the Truth,” an older Dphunk song had a dynamic double bass intro and three part vocals from Ivan, Hall and Daniels III. Ivan introduced another new song called “Hey Hey (Hey)” by quipping, “It’s inspired by being in New Orleans and always saying hi to strangers on the street. If you do that in New York or LA they look at you funny.”

The crowd was dancing the entire show but seemed to up their energy level near the end. The band broke out a fine cover of The Talking Heads’ “This Must Be The Place.” They followed that with Parliament’s “Unfunky UFO.” That tandem of songs had the house quaking. They closed the show with a classic Meters cover. The late Art Neville, Ian’s father and Ivan’s uncle, was a founding member, so for Dumpstaphunk, it was like going back to their roots. They chose to do “No More Okey Doke” with Ivan handling lead vocals and Ian blasting a fast, funky solo.

It was a fine way to end a sort of secret show and leave the audience wanting more. We have no doubt that many who were in the crowd will be at Hollywood Bowl’s Voodoo Threauxdown on August 11 for an incredible mix of beloved New Orleans artists. It will include more of Dumpstaphunk, Trombone Shorty & Orleans Avenue, Tank and the Bangas, Big Freedia, Cyril Neville: The Uptown Ruler, George Porter Jr. and The Soul Rebels. If you can’t make it to that show, look for other Dumpstaphunk tour stops around the United States scheduled through February 2023.

NOT FROM THIS SHOW, but fun!!