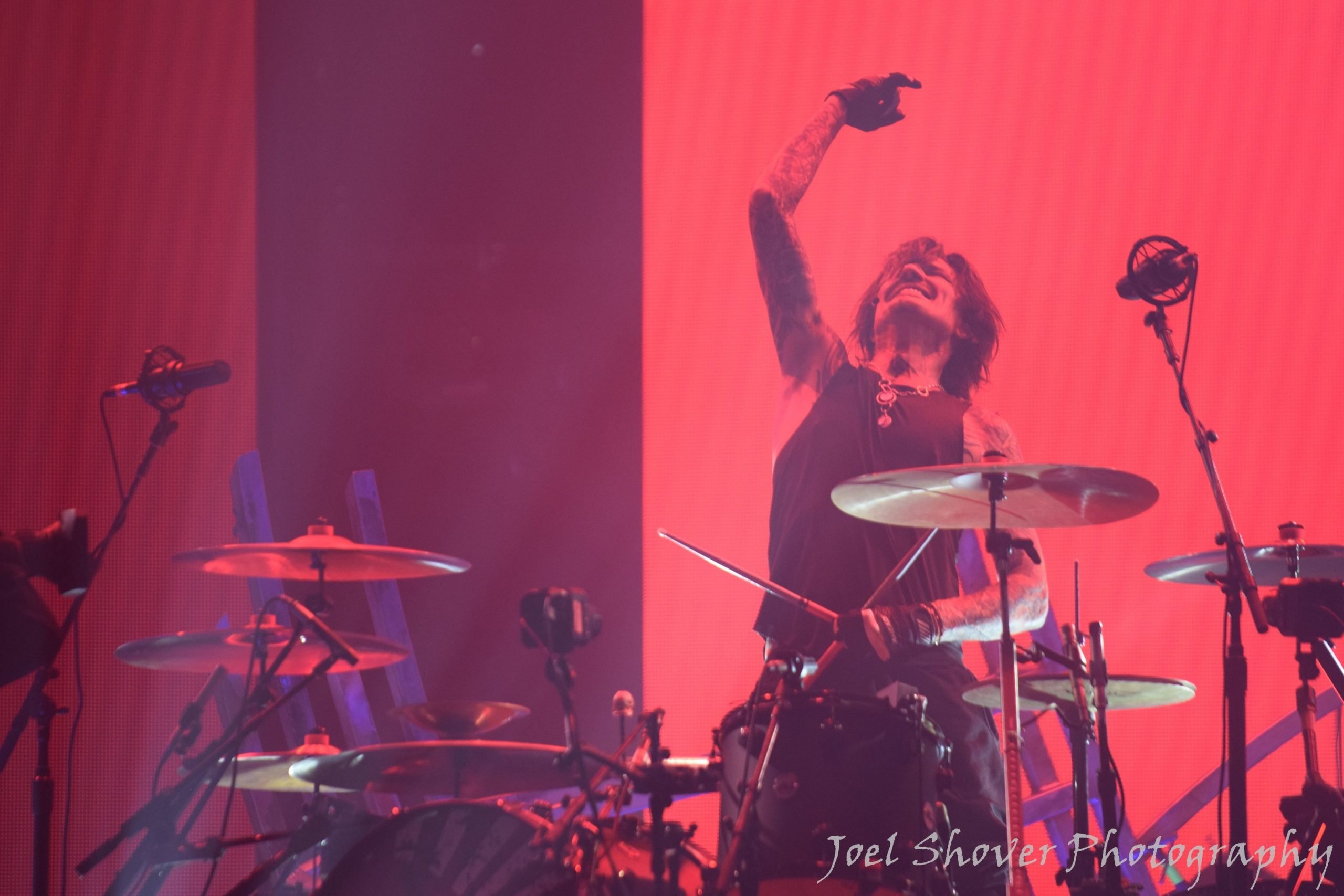 Historic Fenway Park has been the home to the Boston Red Sox since 1912. Boston fans are very used to waiting. They waited 86 years for a world series title, but they would only have to wait 3 years for The Stadium Tour to finally make its stop at Fenway due to the pandemic postponing the show not once, but twice! Well then, the third time must be a charm because not even mother nature could stop this show from going on! Fans from all over the globe walked the famous Lansdowne Street as they made their way into the legendary Fenway Park to see 4 legendary bands rock Boston Strong!

The Stadium Tour originally scheduled for summer 2020 features Motley Crue, Def Leppard, Poison, and Joan Jett with an opening act of Los Angeles based Classless Act. The tour started Jun 16th 2022 and will end after 36 shows in the new Allegiant Stadium in fabulous Las Vegas, Nevada. This opening night, August 5th 2022 in Boston is the kickoff to the second leg of the tour.

Classless Act took to the monster stage they call their playground as the promoted their new album, Welcome To The Show. Classless Act formed of Derek Day (Vocals), Dane Pieper (Guitar), Griffin Tucker (Guitar), Franco Gravante (Bass), and Chuck McKissock (Drums), showed why they were chosen to rock out and share a stage with these four legends of rock and roll as they rocked the gathering crowd.

Joan Jett and The Blackhearts were up next and just as they were getting ready to come out and perform, mother nature had other plans. The team at Fenway Park came over the loudspeakers and cleared the infield and stands of any patrons due to inclement weather approaching. This weather delay pushed the schedule of events back almost and hour and a half.

The rains came along with lightning and thunder and the rains came more. After a good steady downpour, the big yellow ball in the sky decide to show itself and we were under the sticky sunshine heating up again. The crews went to work on the stage and equipment and we ready to rock once again in no time like there wasn’t even a delay.

Check out the full gallery of photos of Joan Jett here.

Joan Jett came out rocking in full force with the smash hit Cherry Bomb. She then launched into the Gary Glitter cover Do You Wanna Touch Me (Oh Yeah). Joan Jett’s’ bad ass sex appeal is still there as she keeps rocking herself to the young age of sixty-four. You Drive Me Wild was the next hit from The Runaways days as the Boston crowd couldn’t get enough!  A personal all time Joan Jett favorite of mine was up next as she rocked into Fake Friends singing, “Losin’ friends. You got nothing to lose. You don’t lose, when you lose fake friends.”

Joan took a minute to introduce The Blackhearts to Boston before Slyding into Everyday People. The next number had even the older veteran staff members at the park rocking as they remembered Crimson & Clover the chart-topping hit from Tommy James & The Shondells. The fans were about to hear the blockbuster they were all waiting for, when Joan pulled out a dime and threw it the jukebox for the number 1 song from 1982; I Love Rock & Roll.  The Boston crowd was singing along word for word. Joan closed out her set with her famed anthem Bad Reputation. It’s safe to say that Joan Jett rocked the hell out of Boston! Go see her!!

The feel of summer was in the air with that nice New England after a rainstorm smell and the show was only getting hotter as Poison took the stage playing hit after hit starting with Look What the Cat Dragged In.

Ride the Wind was next as the crowd couldn’t wait for Bret Michaels to say the words Talk Dirty to Me. The only cover song for Poison was up next as they performed the catchy tune Your Mama Don’t Dance, made famous by Loggins & Messina. What happened next took the Boston crowd by storm as CC DeVille Erupted into a guitar solo that feature a nod to the late Eddie Van Halen with his solo song Eruption. The crowd went nuts!  Fallen Angel took us deeper into Poisons’ setlist followed by a ripping drum solo from Rikki Rocket.

It was now time for the ballad we were all waiting for Every Rose Has it’s Thorn” as the band did a take-two on the song just so it would be special. The band finished up their set with the party-anthem Nothin’ but a Good Time

Full gallery of Poison photos from this show here.

Setlist
Look What the Cat Dragged In

Talk Dirty to Me

Every Rose Has Its Thorn

Nothin’ but a Good Time

Def Leppard brought their distinct rock sound to the massive stage. Fenway Park was now a packed full-house. The band opened with Take What You Want, a new single off their new album Diamond Star Halos.

Check out the show opener:

“Take what you want, take what you need”. They already had the crowd hypnotized when they started the first licks of Let It Go from the High and Dry album. This song featured Phil Collen showing some serious guitar soloing.

Animal came next from the Hysteria record then the first song played tonight off the album Pyromania, that just celebrated it’s thirty-fifth anniversary, was Foolin’. Nobody was being fooled tonight unless you came to this Def Leppard concert thinking you’d hear Too Late for Love, then you’d be a fool.

The rest of the set consisted of more hits from the eighties like Love Bites, Bringin’ on the Heartbreak, Rocket, Hysteria and Armageddon It. Rick Allen performed a short drum solo and Joe Elliott’s’ graceful vocals at one point had me thinking BONO was hyping the crowd! Rick Savages’ signature bass lines from Pour Some Sugar on Me were played and the Boston crowd energized even more. Do you take sugar? One lump or two?

Check out the full gallery of photos of Def Leppard on this day here.

Motley Crue started their set with a large news broadcast on the big screens that took the band into the slamming introduction song Wild Side. The signature beats coming from Tommy Lees’ drum kit could be that of only Shout at the Devil. This had the already rocking Boston crowd rocking even harder with fists in the air.

Motley Crue’s stage as elaborate as it looked, was very versatile. It featured designated dance areas for the latest version of the Nasty Habits featuring Bailey Swift, Hannah Sutton, and Laura “Lolo D’Anzieri to show their seductive dance moves and exceptional vocals. These girls are the Roll to the Crue’s Rock for sure. Mick Mars laid out the opening licks for Too Fast for Love.

The boys slowed it down as Nikki Sixx bass notes led us into the breakup song, Don’t Go Away Mad (Just Go Away) off the Album Dr Feelgood that sold a whopping six million copies alone in the United States back in 1989. Dr. Feelgood was Motley Crue’s first album they recorded after their quest for sobriety. Nikki Sixx is over 20 years sober playing this show. Nikki looks as if he feels as good as he looks.

Saints of Los Angeles was the next song for the evening and that took us into the blinding old school Live Wire. The boys didn’t stop there they went right into MTV classic video Looks That Kill. The Dirt was up next then Motley Crue gave the fans a medley of covers including Gary Glitters – Rock & Roll (Part 2), Brownsville Station’s – Smoking in the Boys Room, The Tubes – White Punks on Dope, The Beatles – Helter Skelter, and the Sex Pistols – Anarchy In the UK.

Check out the gallery of photos of Motley Crue from this show here.

This brought us to the famed ballad Home Sweet Home. Tommy Lee felt at home but only after he got to see all those titties he asked for. Now the title track from Dr. Feelgood has all feeling alright because we knew it was never the Same Ol’ Situation (S.O.S.) with Motley Crue. They are one of the original bad boy bands of rock and roll!

One thing you can’t have enough of at a Motley Crue concert are Girls, Girls, Girls. Just ask Tommy Lee. The boys had more rock than roll left in them as the continued into Primal Scream as they left the Boston crowd with Kickstart My Heart as the final song of the evening.

Go See Live Music…… Till The Next Show………. Joel

Check out the full gallery of photos of Joan Jett here.

Full gallery of Poison photos from this show here.

Check out the full gallery of photos of Def Leppard on this day here.

Check out the gallery of photos of Motley Crue from this show here.