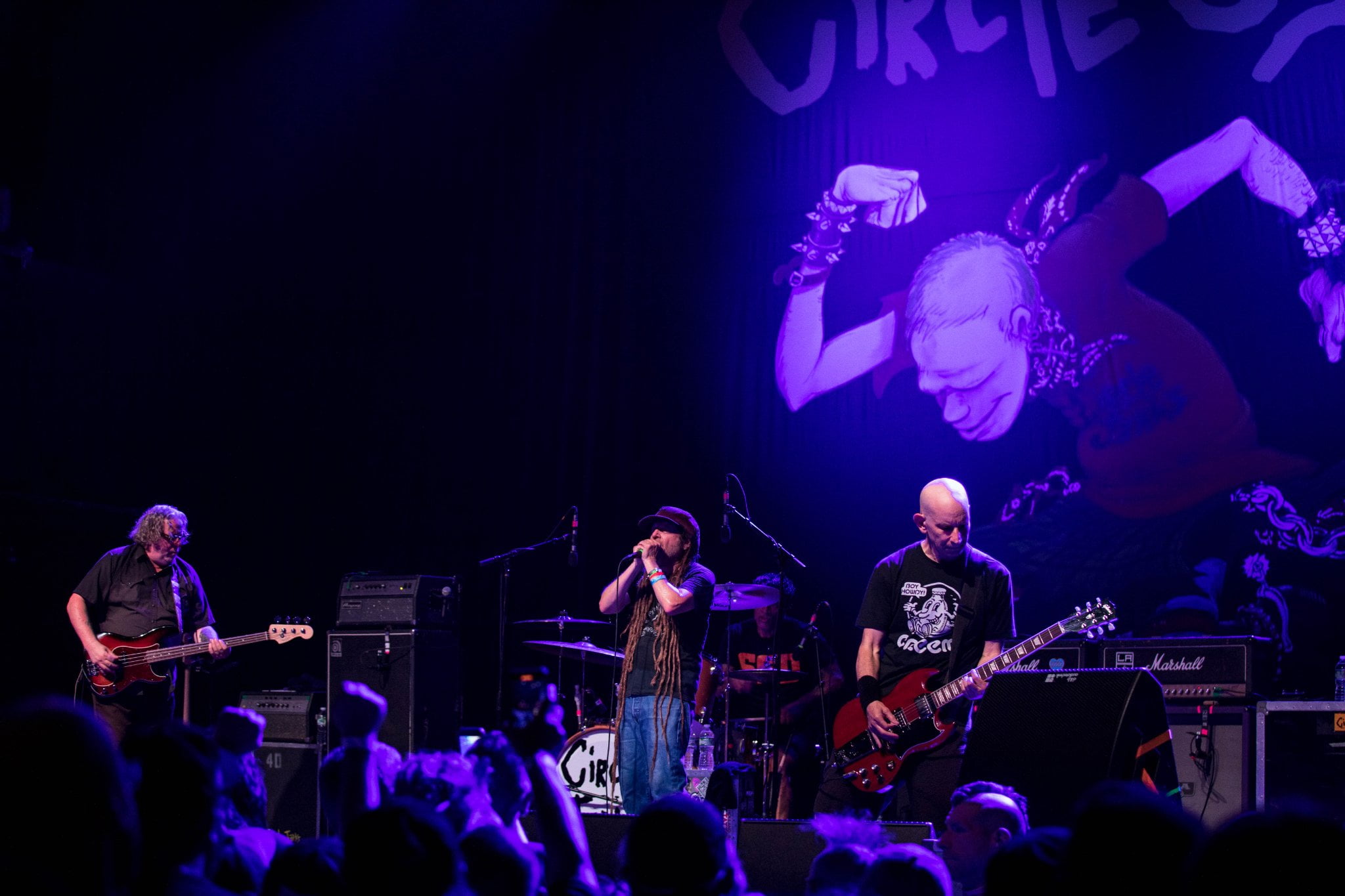 The Circle Jerks finally made it to Boston after several Covid related cancellations following the 2020 tour announcement to celebrate the 40th anniversary of their first two albums “Group Sex” and “Wild in the Streets”.  The reunited band was scheduled to play two shows at the famed Paradise in April of this year when founding member and lead singer Keith Morris got Covid. Rescheduling the two April shows at the Paradise became difficult, so two nights were consolidated to one night at the larger House of Blues on Saturday night July 16th.

Formed in 1979 by ex-Black Flag front man Keith Morris, the band released five albums in the 1980’s and have broken up and reformed several times with different bassists and drummers. The current lineup includes Morris, co-founder and guitarist Greg Hetson, bassist Zander Schloss and drummer Joey Castillo (Queens of the Stone Age).

Keith Morris is a legitimate rock legend having fronted two of the most influential US punk rock bands as well as two recent projects OFF! And FLAG. Morris never received the recognition he deserved, and he’ll be the first to tell you all about it. At Saturday night’s show Morris was quick to name drop some of the biggest names in classic rock who all thought he should have been a huge rock start on par with the greatest of all time. And they are probably right. Morris is a tremendous talent, and he remains vital and relevant.

Some forty years after the bands peak in popularity it would be understandable if Morris and the Circle Jerks slowed down and didn’t pack the same punch as they did when Punk rock was upsetting the status quo and providing an alternative to big, bloated dinosaur rock bands that became more and more removed from the day to day reality of their audience.  A lot of older rock bands have recently reunited and have been touring. Almost all have understandably lost a step or two if not more. Some are barely a shadow of their former selves. I went to Saturday’s show with low expectations having heard there would be almost as much talking and storytelling from Keith as their would be music.  And although there was a lot of breaks and talk between songs, the band and their leader were ferocious in their delivery, energized and joyously entertaining.

Morris who is now 66 has had some well documented health issues and although he may not live the lavish rock star life of Keith Richards, he’s been on and off the road since his Black Flag days and he’s no stranger to the rock and roll lifestyle. Clean and sober for many years now and managing his adult-onset diabetes, Morris looked healthy and remains defiant and as combative as ever. The show started with a rant about the record industry and being shunned by the major record labels and fans listened intently and patiently.

Morris is a natural storyteller, and he knows how to hold an audience, but as soon as the band kicked into the first notes of “Deny Everything” bodies started flying and the crowd erupted. The only time things let up during the 33 song set was between blocks of songs when the band would take one of their many extended breaks and Keith would address the audience. Once he was finished talking the band would burst back into song and the mayhem would continue. Hetson, Schloss and Castillo for their part let the music do the talking and played together in perfect lock step. Morris spoke of their troubled past but on this night, all seemed to be forgiven and the band appeared to be genuinely happy to be playing together. Hetson in particular was full of smiles and smirks, throughout the evening doing his best Pete Townsend impersonation, leaping into the air, clutching his guitar close to his side.

As the music churned and the audience raged you couldn’t help noticing Morris and Hetson often staring into the mosh pit like two proud parents. Their expressions conveyed a mixture of enjoyment and fascination, seemingly quite pleased with the fury they had created down on the floor below.

When the band came out for their 3 song encore you had the feeling that things were just really getting started. As Keith screamed the lyrics of the Soft Boys cover “I Want to Destroy You” the sentiment seemed genuine, and I believed every word.

For the Boston outing hard core punk pioneers 7 Seconds and Detroit’s Negative Approach opened.  Both bands started around the same time as the Circle Jerks and fit nicely on the bill. Negative Approach’s lead singer John Bannon is a fascinating character who like Keith Morris still delivers an energetic and powerful performance not much different from what you would see from him in 1981.