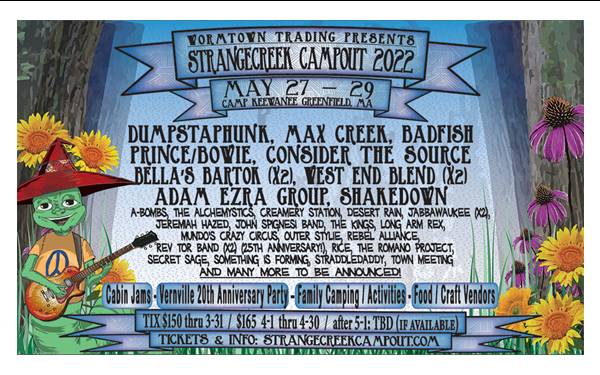 Dang! Festivals like this are a marathon. By the time Sunday rolls around even the most hearty among us are starting to drag a bit. We’re lucky, we’ve developed great festy resources and bus sleeping is WAY BETTER than tenting it. We woke up and had a nice breakfast and got ready to soak up the rest of this fine festival. The weather was a bit challenging earlier in the weekend, and Sunday came in sunny and hot.

The traditional kids parade snaked from family camp up to the main concert field. The kids set reminds us that the Worm children are our future… Rev Tor Band kicked things off in his usual Sunday position. The laid back set is always a favorite with Tor bringing originals and covers to the table. Excellent musicianship and tasteful choices and arrangements make this a must see set every year.

Whole show recording, use the arrows to toggle between songs.

Up next was Berkshire blues queen Gina Coleman and her band Misty Blues. Coleman leads an excellent blues ensemble with her deep vocals and soulful delivery. I was excited to catch the set as I see she’s coming back to the area on July 30 at the Shea Theater in Turners Falls with a Queens of the Blues show. Misty Blues did not disappoint with a fine set of material that ranged from classics to originals. Coleman made the great choice of including two of the Grateful Dead’s blues standards in “Spoonful” and “Wang Dang Doodle” to include in her set. Like the Rev Tor band set, this was a great way to embrace a Sunday early afternoon, with great tunes and a building up of energy and excitement as the day’s great musical journey continued.

Prog jammers Arukah were up next on the main stage. I’d been hearing a bit of buzz about this band. My friend Brian O’Connell is on bass and his projects are always both interesting and technically excellent so I was sure that this would be a worthwhile venture. O’Connell, who was also in the Rev Tor Band that day, is playing in a ton of projects these days. For Arukah he joins Brian Epstein on guitar and vocals, Dennis Angelo and Mark Munzer to form this dexterous outfit who have been gigging hard in their first year together.

I’ve known O’Connell since his days in Boston jam band Uncle Sammy. So I was familiar but surprised when they busted out with that band’s “Superman” which I believe was penned by O’Connell’s bandmate Beau Sasser who played on Friday night at the festival. The set was fun and skillful, and I feel like I got a good idea of where this band may be headed in the coming years. Set list: 1. Burn 2. Swerve 3. Some Forgotten Road 4. Medicine Man 5. Slink 6. The Promise 7. Superman 8. Just Can’t Wait (cut on this recording) 9. Overdrive (missing from this recording)

We cut out to go over to see Town Meeting in Vernville. I’d been hearing about this MA band for years but had yet to catch them. Vernville was nicely packed when we walked up with the band already raging. The band is an Americana Countrified Jam Rock menagerie out of northern Mass, with the rollicking beer soaked boisterousness I’ve come to expect from people and bands from that area. They reminded me so much of Hot Day at the Zoo who were from that area- but whereas HDATZ harkened toward bluegrass and the Dead style, Town Meeting leans more heavily on a more legit Nashville rock sound. They had a Jason Isbell vibe for sure, with accessible songs that heaped a Boston accented twang onto a New England back country joyride. I especially enjoyed “All the Bars Around Here” and “West of Seattle.”

This is one of those bands that if they take themselves seriously, and the songwriters in the band can find the right combination of inspiration and inebriation- they just might stumble on an album of perfect songs. It’s hard to say if it’ll happen- but it just might. Or they just might drive their band van through a barn fire while General Lee-ing their way across the cornfields of New England. One thing is for sure- they’re fun, and I’m sure to catch them at some honky tonk or bonfire party as soon as I can.

As many bands as you see at a festival, you miss nearly as many. While we were jumping from stage to stage, and from booth to booth, visiting old friends and making new ones, there were shows going on all around us. Playing Dead were on the main stage doing exactly what you expect, a whole set filled with Gratefully tasty jams.

Back at the main stage West End Blend were kickin some funkin ass! They are New England’s favorite new funk band it seems, and a sunny Sunday afternoon is a perfect way to showcase their good times vibe. Vocals, horns, pocket and rhythm all combine in a very pleasing way with West End Blend. They throw down the dance party you’re looking for, and I expect them to continue growing into a fan favorite. Don’t get me wrong, they’re no slouches, the musicianship is top notch, and I look forward to hearing what they write in the coming years.

We ping ponged our way back to Vernville to catch Worm favorites The Alchemystics.   This festival favorite never disappoints.  I was stoked to see them with a new vocalist, Anthony Schauman, who is singing the hooks and counterpoint to the vocals provided by Ian-I and the raps by Force.  Schauman is the best singer the Alchemystics have had since the passing of Ras Jahn, and his presence gave me hope for the Alchemystics trajectory.  The band was tight with guitars, keys, drums, percussion and vocalists all building on each other.  Elements of rap, hip hop, reggae, soul, rock, jam all swirl and form something that is definitively festive, and a downright Worm staple.  The crowd all felt like family, and the spirit of the day was nurtured and grew before our eyes and under our feet.  Dust was kicking up from the celebration being shared.  And just like that, we were off again, back toward camp.

The main stage finale to this weekend was The Machine. They seem to have settled into this Sunday night finale position, and there was a rush of people to the main field to stake their territory. An hours long set included any Pink Floyd song you may want to hear, done expertly. I’ve seen the Machine many times now, and every show is a near perfect delivery of the songbook.

It’s not just the sound though- just like Pink Floyd- the Machine bring with them a world class light show. I spent time close up in the thick of things, and at a great distance down at the booth near the bonfire- and from near and far the lights were amazing. Technology has advanced so far, the stage was lit up like a rocketship carnival supernova. It was so pretty and accented the music, and was being accented by the music. Just like with Pink Floyd, this show became a sound and light extravaganza. From the “Shine on You Crazy Diamond” opener to the epic “Run Like Hell” which stretch ten plus minutes this nearly three hour set was anything anyone could have hoped for at a festival.

MAN, we are out of festival shape! Sore muscles though give way to the greatest memories. A little stiffness is a small price to pay for a gathering as awesome as this. Thousands of your closest friends, creating a temporary musical and artistic summit, living life to its fullest. Smiles were everywhere. The whole thing seemed to run smoothly- were there hitches along the way? Sure- but we’re all re-learning everything after a few years away from each other.

Sundays at a festival are funny. You can be torn between a longing for the comforts of home after bathing in the dirt for days and wondering if you couldn’t perhaps live this way forever. Grab your old lady or old man, a camping stove and a tarp to pull over you, and wander to wherever the next notes are strummed and myths hummed. Can’t we just do this every day forever? Until our next festival funday, our next chance meeting- be safe my friends and Spread the Worm.

July 30 Misty Blues presents Queens of the Blues at the Shea Theater in Turners Falls, MA