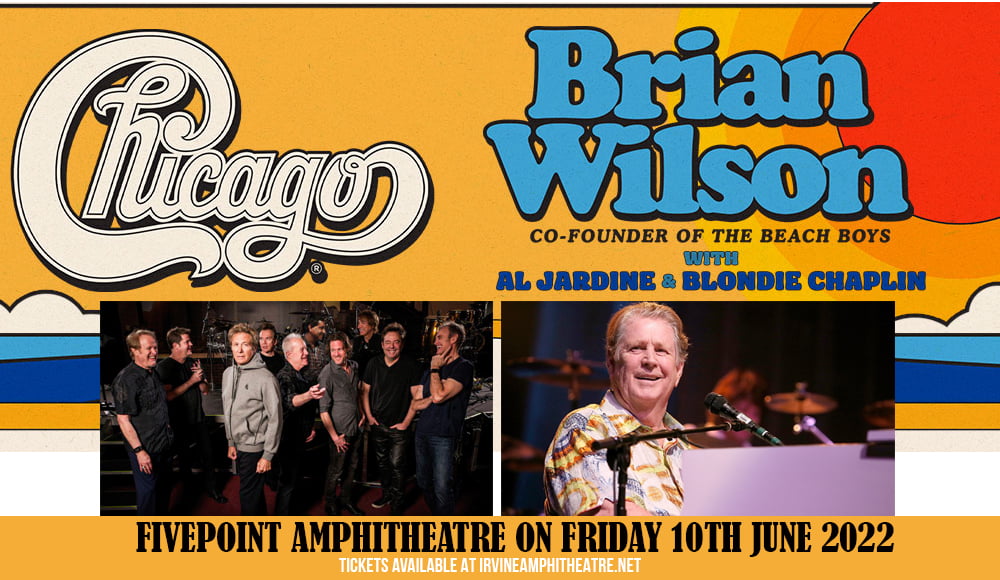 As The Beach Boys travel the country this summer under the banner of a 60th anniversary, and celebrate that milestone, as well, with a triple-CD release, Sounds of Summer: The Very Best of The Beach Boys, the Rock-and-Roll Hall of Fame group’s esteemed co-founder, Brian Wilson, too, shares the road as the enduring solo artist he’s been for the better part of the past three decades.  Currently, Wilson’s teaming up with another icon, Chicago- celebrating its 55th and a forthcoming new release, Born For This Moment– on a series of U.S. tour dates.

Bringing Wilson and Chicago together marks the union of two of the more successful propagators of pop in music history, collectively selling over 200 million albums worldwide, giving audiences the unique chance to enjoy this summit meeting of certified legends.

It’s a coin toss as to which truly is on top, but for this run Wilson plays gracious support to Chicago, opening this night at Irvine’s FivePoint Amphitheatre just as twilight arrives.  Wilson’s enlisted, once again, two talents of his former band- Al Jardine and Blondie Chaplin- to fill-in an ensemble that takes on 20 of the more beloved entries in Wilson’s vast repertoire.  Ambling onstage with a little assistance, Wilson’s mere appearance, just shy of 80 years-old, is enough to draw a standing ovation.  It would be the first of many.

Wilson’s hour-plus set ignites with the quintessential “California Girls,” as the versatile and seasoned group around him works in harmony, literally and figuratively, with its leader.  Seated behind his trademark white piano, Wilson participates vocally as the moment strikes him, trading off verses with Jardine’s son, Matt, by his side.  There are half-a-dozen songs, front-loaded, from the early “cars and girls” era; “I Get Around” and “Surfer Girl,” two standouts.

Chaplin enters with a shot of energy, paying tribute to brother Carl Wilson on “Wild Honey,” stalking the stage with his guitar, and shouting encouragement to Wilson as he passes.  They dust off “Long Promised Road,” delight with the steady “Sail on Sailor,” and welcome Chicago’s famed horn section for “Darlin’.”  Wilson catches the momentum, carrying “Wouldn’t It Be Nice,” breaking out “Be My Baby”- returned to repertoire after seventeen years- then as a team player on the compositional complexities of multi-part harmony on “Heroes and Villains.”

A final dash of Beach Boys nuggets begins with “Good Vibrations,” and has them dancing in the aisles on “Help Me, Rhonda” and “Surfin’ U.S.A.”  Finally, it’s Wilson’s golden moment: the lone entry from his solo catalog, and his best vocal of the evening, on a beautiful “Love and Mercy.”  And a final standing ovation from the SoCal crowd.

It’s impossible to separate Brian Wilson from The Beach Boys, despite the separation between the two as present entities of entertainment.  Brian Wilson is and will always be a Beach Boy.  While those currently possessing the name will honor the six-decade legacy with their own sounds of summer, it’s perhaps more touching to see Wilson and Jardine, with Chaplin, and their ensemble; miles from where it all started; reviving the memories of old; accepting their well-deserved love one more time in the setting sun.

Sail On, Sailor
(with Blondie Chaplin)

Wouldn’t It Be Nice

Be My Baby
(Ellie Greenwich cover) (First time since 2005)

I Can Hear Music
(The Ronettes cover)

From the night prior: