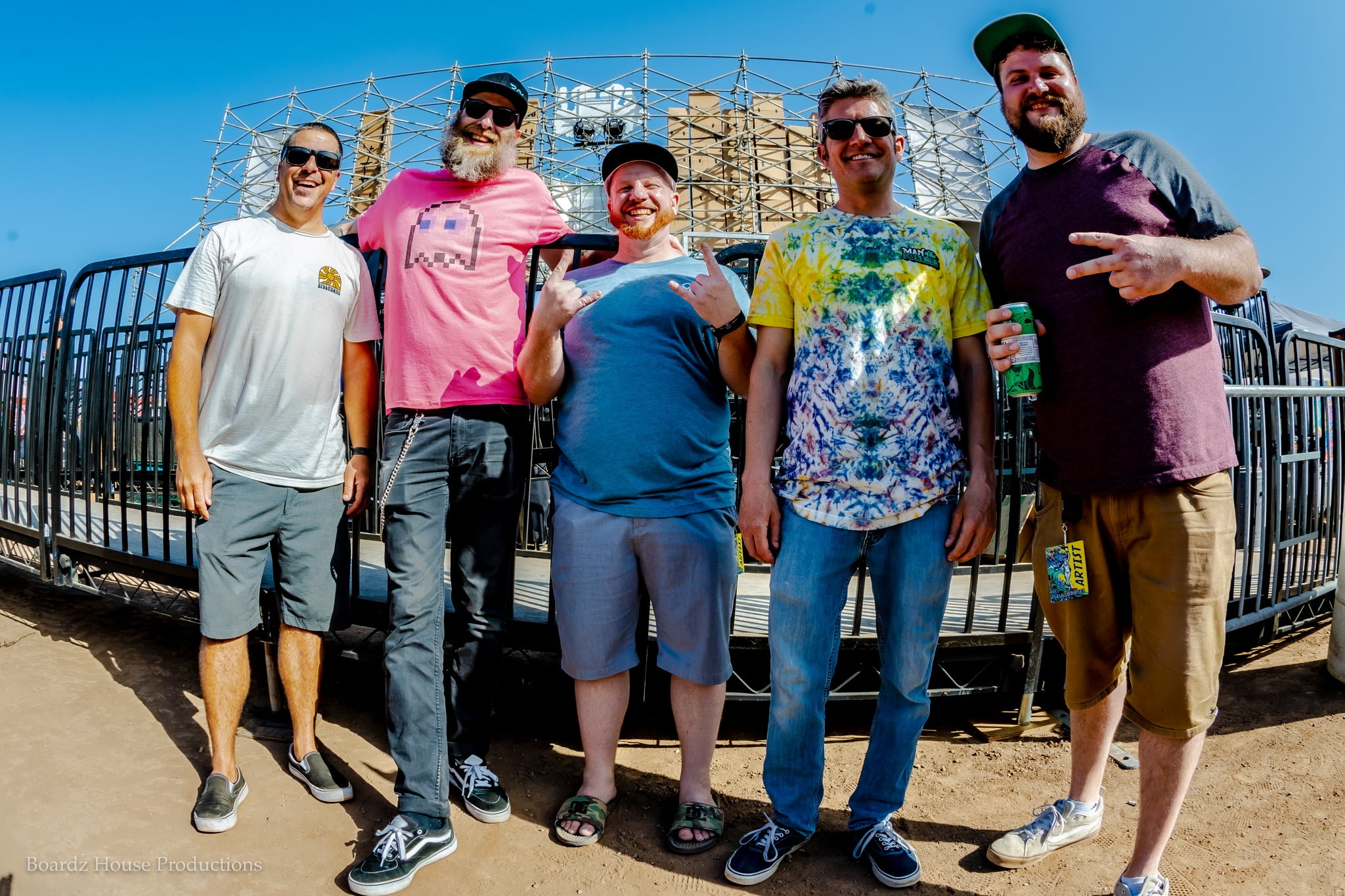 New England’s unique mix of roots reggae and jammy goodness caught the good times at the annual festival earlier this April. We were able to catch up with band leader Brett Wilson and his crew to find out about the band’s appearance.

Roots of Creation appeared in their Grateful Dub format, taking the stage in Ventura CA in the middle of the afternoon. RoC was fronted in their normal format featuring long time members Tal Pearson on keyboards and melodica and Andrew Riordan on saxophone and vocal harmonies. This version of the band did feature special guests including Slightly Stoopid drummer Rymo on drums, percussion, and didgeridoo and Alific on bass. Alific has worked with Stick Figure, Kbong, Johnny Cosmic and others as bassist and producer. And RoC welcomed in their long time engineer collaborator Pete Peloquin.

“I’ve wanted to collaborate with Roots of Creation for a long time and I’ve been a huge fan of the music of The Grateful Dead for years, so it was a genuine honor to get the call from Brett to play bass with them at the Skull & Roses festival this year. And the icing on the cake was finding out that one of my all-time favorite drummers (Rymo from Slightly Stoopid) would also be joining us for the set. It was a sincere privilege and an unforgettable musical experience for me. Thank You!” – Alific (bassist / producer)

“Playing the music of the Grateful Dead has always been super nostalgic for me.  I was born in San Francisco and grew up in San Rafael, CA.  I drove by the Dead’s headquarters everyday on the way to school.  We would see Jerry driving around in a blacked out conversion van while my friends and I were out skateboarding. Many of my family and close friends were connected to the scene, including my older sister who toured in an old VW bus and sold spaghetti and cookies in venue parking lots in hopes of finding a “miracle” at sold out shows around the U.S. in the late 80’s and early 90’s.  She would give me cassettes of live show recordings and I was super intrigued at a young age.
Brett selected many tunes that I was already familiar with and had heard on the GDUB album.  We didn’t have time to rehearse before the show and that spontaneity brought out our best focused performance in that moment.  Many of the tunes we played lend themselves naturally to a dub and reggae feel. I hope that we expanded the listeners’ minds by refreshing the sounds to audience that knows all of the Dead’s repertoire very well. I hope we can do more of these in the future!  Thank you to the Skull and Roses production team and to Brett Wilson for making this happen.” RyMo

Brett Wilson was moved by the day, for sure. “”The energy at Skull & Roses was amazing! As the stage spun around and we kicked into “They Love Each Other” I saw so many smiling faces in the crowd. There was this one guy with a huge beard and epic hair with his hands in the hair having a peak musical or psychedelic experience (or both at once lol). I was really feeding off his vibe. I had a fan come up to me and tell me a story of discovering our music in jail on a Nokia phone on youtube and having it help him make it thru the past 7 years. This was his first time seeing us live in person. He mentioned that the positivity of our music got him through that difficult experience for many years. Now he’s focusing on his girlfriend, family, work and music. “

“These types of stories remind me of why music is so powerful and why I love what I do. We also had Deadheads that had seen over 300+ shows come up to us loving how we changed the arrangements and added an upbeat Reggae/Dub/Rock vibe mixed with the jams and songs they love. It was exciting having special guests like Rymo & Allific with my boys in RoC! We are set on making each concert a unique and ecstatic experience. RyMo lead two epic spacey and funky Didgeridoo jams inspired by Drums n Space which was a highlight for me. He has a Rhythm Devils tattoo across his back so I was set on letting his Mickey Hart “Love Light Shine!”

“I always have to choke back tears when I sing “Standing on the Moon” so I closed my eyes and soaked in the sun… then looked at the sky… and thought of Jerry and how much of an effect he has had on the world and my guitar playing. The band hopped up for the end and Ventura came in on the end refrain “To Be With You……” while the stage spun us off stage slowly and we let the sun kissed Deadhead end it the song by themselves (without the band) Accapella… it was a powerful moment for me!Jon Phillips had this to say, “Brett Wilson of Roots of Creation from New Hampshire and special Cali guests Rymo (fromSlightly Stoopid) and Dan Kelly (of Fortunate Youth) rolled away the dew on a set of Reggae inspired classic dead tunes and had deadheads who made the trek to Ventura dancing and twirling to fresh versions from the Hunter / Garcia songbook. Brett dominated on guitar channeling the spirit of Jerry Garcia while a solid rhythm section of Cali’s finest held down a solid beat allowing Wilson to gushing flow of guitar and vocal prowess.  Many in the audience unfamiliar with RoC welcomed a unique presentation of the Grateful Dead through selections from Roots of Creation’s album –  “Grateful Dub –  A reggae-infused tribute to the Grateful Dead” – in a special set with guest members of some of southern California’s most popular bands.  They were “drivin that train” indeed!”- Jon Phillips | Silverback Music

Check out Steve Kennedy’s extensive review of the rest of the festival with tons of photos plus some set lists and video, too.

Check out Steve Kennedy’s extensive review of the rest of the festival with tons of photos plus some set lists and video, too.