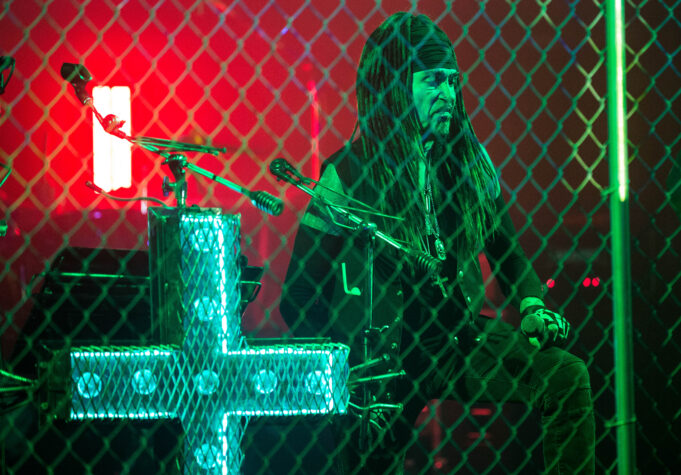 Back in September 2021 Ministry announced that they would once again delay the Industrial Strength tour that was originally supposed to kick off during the summer of 2020. The tour was finally able to launch in Columbus Ohio on March 2 and will conclude in Seattle on April 18th.

Each show date will celebrate thirty years of Ministry’s milestone album The Mind Is A Terrible Thing To Taste as well as debut new songs from the their 15th studio album Moral Hygiene, released in 2021.

The initial tour was supposed to include opening bands Front Line Assembly and KMFDM. Both bands were eventually replaced by the godfathers of grunge, Melvins, and the longtime southern groove, sludge and doom metal quartet Corrosions of Conformity.

On Friday March 11 the three bands made their seventh stop of the tour at the College Street Theatre in New Haven, Connecticut.  Each band has been around and touring for almost forty years so there was no one who came to the show on Friday not knowing exactly what they were in for, a long night of aggressive and abrasive music, leaning heavily toward slower tempo songs with big and heavily distorted guitar riffs.

The first band to take the stage was North Carolina’s Corrosion of Conformity. Their set was the biggest surprise of the night, playing an energetic and muscular set of rock heaviness. Lead singer Pepper Keenan is at times a dead ringer for James Hetfield and the band comes across as the psychotic bastard child of Black Sabbath and Metallica. Founding guitarist Woody Weatherman performed with an enthusiasm that was endearing especially for a band that has been around this long and has performed more than 1,400 shows since 1982. In fact, the whole band was in great spirits and happy to be out of the garage and playing live together again after their long hiatus. Five songs into the set the band hit a high point,  the crowd moving to “The Door” from the 1996 album Wiseblood. The song is an uptempo number characteristic of the band’s higher energy-driven songs and packed a funky punch with everything the band does so well, perfectly encapsulated in just over 4 minutes.

Check out the full gallery of photos of Corrosion of Conformity by JD Cohen here.

With the crowd amped up, you could feel the energy rise for the Melvins, who came on stage to the music of the Sanford and Son theme and a giant picture of Agnes Underwood of Bewitched as the backdrop. The band opened with the Zeppelin like guitar chords of “The Kicking Machine” from 2008’s Nude With Boots. Drummer Dale Crover started the song off flailing away at his kit and didn’t stop for the entire 50 minute set. The moshing started immediately in front of the stage as the first notes from Buzz Osbornes guitar rang out. Some in the crowd had been patiently waiting for the moment and all at once could no longer contain themselves.  The Melvins are one of the most consistent bands and they performed their set with the straightforward professionalism and workman like manner of a band that knows how to deliver without a lot of perfunctory banter or theatrics. You could hear echo of the Red Hot Chili Peppers, Nirvana, Tool, Pearl Jam and the hundreds of bands that have been influenced by Buzzo and the Melvins since 1983 when they started in Aberdeen, Washington playing songs that were slower and heavier than nearly anyone else at the time.

Check out the review of the 2018 Los Angeles Ministry show by Stevo Rood here.

Check out the full gallery of photos of the Melvins by JD Cohen here.

The headliner Ministry came out to a darkened stage performing behind a chain linked fence. One the screen was a image of the Ukrainian flag with the words Ministry Stands with Ukrane and the Ukrainian National Anthem playing over the house sound system.  The crowd on the floor tightened pumping their fists in the air as the lights started flashing and the band broke into “Breathe” with it’s lyrics

This is the world, It’s not working, This is this earth, Breathe! breathe, you fucker!.

The volume was cranked up for Ministry, the lights went dark and the pounding beat intensified and never relented. Vibrent and youthful lead singer Al Jourgensen, who is now 63 years old barks and screams the lyrics more than singing and you can’t help be won over by the conviction and force of his presence on stage. Jourgensen manages somehow to reach the audience on a direct and visceral level even while performing on the darkened stage behind a chain link fence. On this tour Jourgensen’s band includes Roy Mayorga on drums, Paul D’Amour Tool’s original bass player, guitarists Cesar Soto and Monte Pittman, and John Bechdel on keyboards.

Most of the set included songs from three Ministry albums, The Mind is a Terrible Thing to Taste (1989), Psalm 69: The Way to Succeed and the Way to Suck Eggs (1992) and Land of Rape and Honey (1988) and several covers. Black Sabbath’s “Superanaut” was a special treat midway through the 90 minute set. The chain link fence came down for a three song encore that included the only songs from the latest Ministry release, 2021’s Moral Hygiene, “Alert Level” and “Good Trouble”. The evening ended with a very Ministry styled version of Iggy and The Stooges “Search and Destroy”.

Check out the full gallery of photos of Ministry by JD Cohen here.

Check out the review of the 2018 Los Angeles Ministry show by Stevo Rood here.

Check out the full gallery of photos of the Melvins by JD Cohen here.

Check out the full gallery of photos of Corrosion of Conformity by JD Cohen here.

Check out the full gallery of photos of Ministry by JD Cohen here.