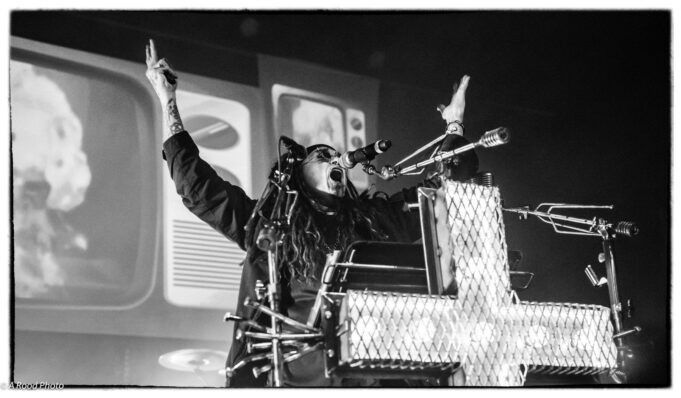 When you finally get to see a show from a band you loved as a teenager, your expectations are quite high, and the last night’s performance by Ministry at the Fonda Theatre in Los Angeles definitely exceeded them.

The band dedicated the whole first part of their volcanic set to the songs off the new album “AmeriKKKant” (2018). Not familiar with it, I was literally and figuratively blown away by the infectious energy of the band as a whole, and its leading man Al Jourgensen, in particular. It’s always endearing to see a collective with an unambiguous political stance; and the images projected on big screens behind the musicians spoke louder than words – we live in crazy times, indeed.

Later on in the show Al promised that the “next 45 minutes” would be allocated for the old classics, and that’s when the noise in the room went to the now standard 11. The band jumped over 30 years back in time with some songs; and as a lovely surprise, to close the show, Dave Navarro (Jane’s Addiction) and Chris Connelly (Revolting Cocks) joined them onstage to perform Every Day Is Halloween, once described as the anthem of America’s disenfranchised Gothic community.

So for this reviewer at least, Ministry are as pertinent and relevant as they ever were, with songs to match. If you don’t believe me, just catch one of their high octane future performances, you won’t regret it.

Victims of a Clown

We Are Tired of It

Every Day is Halloween