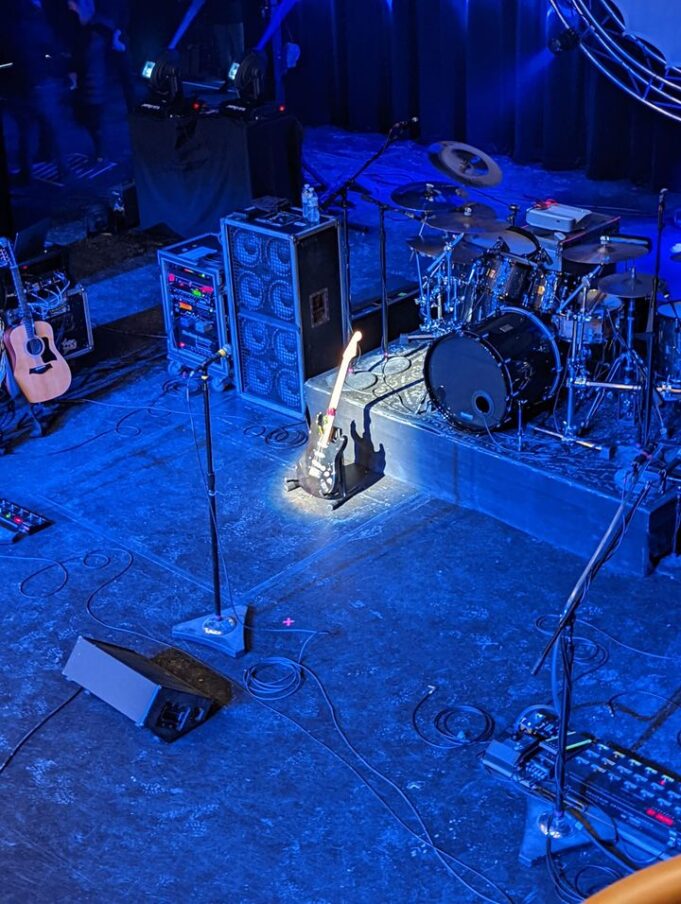 Pink Floyd tribute The Machine pay tribute to their own, pay respects with a show at the Colonial Theatre in Pittsfield MA on February 05 2022

It must have hit fans and friends like a ton of bricks, a sudden Facebook post by the band the Machine informing us all that guitarist, singer and band leader Joe Pascarell had died. No cause was given, or needed necessarily, and the band announced that they would still do their show on the fifth of February in western Massachusetts. I instantly thought of my friend in the band, who I have known for over twenty years, and my heart went out to him. We knew that even though we only see him once a year or so, usually at a festival or online for a stream- that we should go and support him and the band.

I’ve seen the Machine at least a half dozen times, including two shows at the Colonial Theater in Keene NH, Wormtown or Strangecreek fests, the Mighty High festival in NJ- and just around. They have been a staple in the Northeast live music scene, pretty much the go to Pink Floyd tribute band. I had seen them at least once when Joe had taken a step back from the band due to health concerns around ten years ago. On Saturday night in the Berkshires they revisited the lineup that worked during those times, with bass player Ryan Ball moving over to lead guitar, Adam Minkoff coming in on bass and vocals, with Scott Chasolen on keys and drummer Tarah Cohen. And when Joe returned some seven years ago he brought a renewed vigor for himself and for the band as they returned to their previous lineup with Joe handling guitar and vocals and being the musical center of the band.

The night was very cold, and we were very happy to have a hotel room steps from the historic Colonial Theatre, and to eat at their restaurant (which was surprisingly good for a Holiday Inn- the brussel sprouts were surprisingly awesome) before the show. We arrived as the house was filling up and the show started shortly after eight PM. Tarah Cohen took to the stage and gave what I can only describe as a eulogy- a beautiful short speech about her love for Joe that spoke for the whole band. After a quick moment to gather themselves after Tarah’s words, the band took the stage. Right in the center was Joe’s guitar, with a spotlight on it showcasing the man’s presence in the band even in his absence. Adam on bass and Scott on keys were to the audience’s left, and Ryan on guitar and Tarah to the right, all clustered in the front half of the stage, as if by being close to the audience we could all reassure each other in our grief and celebration of life.

The band opened with “Shine On You Crazy Diamond” and the emotion was palpable. Both players who were in roles that were both new and throw back were beyond competent and showed nearly no rust on bass and guitar. Chasolen’s animated presence behind the boards makes him somewhat of a conductor or mad professor with a shining aura and smiles enough for a whole theater. A trio of hits in “Breathe,” “Time” and “Another Brick in the Wall” followed and illustrated the band’s complete mastery of the Pink Floyd songbook.

But the ability to play more than the hits is somewhat of a calling card for the Machine. “Coming Back to Life” from the Division Bell showcased a lesser known number, with ever deeper mining of more obscure material to follow in “Fat Old Sun” and then the incredibly rare “Lucifer Sam” from the earliest moments of the band’s career. The classic cut from Animals “Pigs” finished out the set and the band let out a collective breath having come back and honored Joe’s legacy with an amazing set. Beyond proficient, you could see the old and new lineup reconnecting, both in honor of their fallen friend, and just the reality of a band developing cohesiveness on the fly after a period of dormancy.

A quick set break saw the bar fill up and disperse, and after the shorted time the band was back. The ambient sounds of boat on water previewed the second set opener “Signs of Life” which itself is a preview of the late period hit “Learning to Fly.” A personal favorite of mine, “Hey You” from the Wall followed and the band was in full stride. I was intrigued to hear Dark Side of the Moon’s “Great Gig in the Sky” start and it made me wonder who may be tackling the significant vocals. Abby Ahmad emerged from the wings to deftly handle the acrobatic vocalizations of this challenging piece. She came on the stage, she dropped incredible vocal skills, and without fanfare departed. The ethereal start to “Echoes” were emitted and the song unfurled in all of its psychedelic glory. The band flexed some groove muscles as they were able to give the song their own locomotive swing and cadence. My eyebrows raised when I could hear the telltale tones and notes of “Set the Controls for the Heart of the Sun” foreshadow the band’s transition into that classic from the early days of Pink Floyd.

The contemplative and emotional nature of the night came into focus when Minkof deftly delivered a poignant version of “The Final Cut” from the album of the same name. You could feel the energy and collective emotion flowing from band to audience and back again. Dark emotions are baked into the cake when it comes to a Pink Floyd show, but the collective and shared feeling of loss and mourning that was shared between the band members and the audience members gave extra meaning to the performance of that song, and of the whole night. “You would be hard pressed to find a Pink Floyd song that is not about loss” Chasolen said to me after the show as we were discussing the power of that night’s performance.

But just as we were feeling the most heaviness of the occasion the band reminded us why we were all together, not to wallow but rather to celebrate Joe’s life. “Wish You Were Here” is the perfect vehicle to drive everyone from despair to hope, presenting a path for us to all celebrate through the tears, which were present throughout the night for band and audience members alike. The guitar tones and vocals gave way to the opener of “Fearless” which saw the optimistic energy ascend to the clouds. The set closed with the classics “Brain Damage” and “Eclipse” which saw Ahmad rejoin the band.

The encore presented another opportunity for the band to celebrate their fallen friend, as they dusted off incredible rarities. Minkof deftly delivered a solo performance of the apropos “Wouldn’t You Miss Me” on acoustic guitar giving voice to all of our grief. “Burning Bridges” was another rarity that illustrated this band’s ability to really play anything by Pink Floyd. And to tie it all together the most classic of classic rock hits, “Comfortably Numb” put an end on a night that was hard, necessary, loving, nostalgic, and celebratory.

Shine on You Crazy Diamond

Another Brick in the Wall (Part II)

Coming Back to Life

Great Gig in the Sky (with Abby Ahmad)

Set the Controls for the Heart of the Sun

Wish You Were Here –>

Wouldn’t You Miss Me?

A Show for Joe, rest in Peace Joe Pascarell.