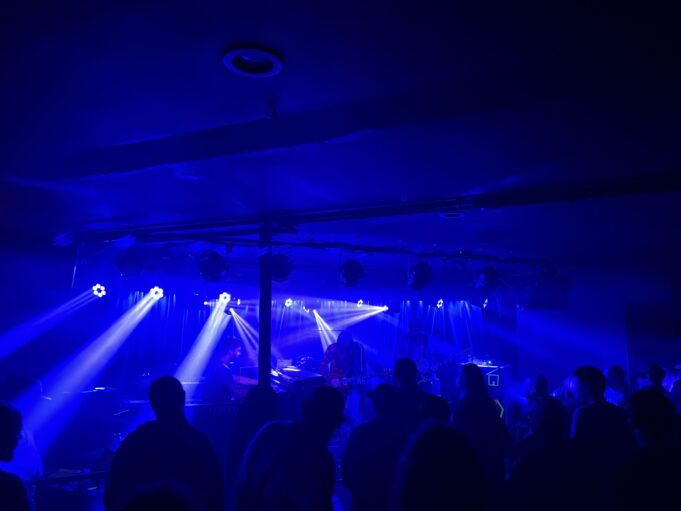 Dopapod landed in Columbus on Thursday to begin a 3 night run at Woodlands Tavern.  It was a cold and rainy night, and all the kids were out Trick or Treating in our Neighborhood.  I got to the club and bought a t-shirt for the band, showed my ticket and went in to see Dopapod.

I met a few friendly people and the band came out soon after my arrival.  The band morphed through a few good originals before diving into some songs from Woodstock ‘69.   I thought the originals were played perfectly, but I mostly recognized the covers.  First was Voodoo Chile by Hendrix.  This was cool.  I liked the tight rendition they did.

Rob and Eli really shredded through their tribute to Jimi Hendrix and played the song with respect.  They played some more well executed jamband originals that blew my mind.  Just to be clear, Dopapod is not a ‘90s jamband.  The craft and expertise they put into their originals is way more advanced than a lot of ‘90s jambands.  So the technical wizardry and tonality of each song is distinct and beautiful.  I would call them a new era jamband.  Even back in 2012, they released a song called French Bowling, where the guitar and keyboard parts are as difficult as early Phish.  So the early Dopapod is on par with early Phish technique and synchronicity.  I say this as a guitar player and musician.  Being Berkley School of Music graduates, Dopapod has paid a lot of dues in the tour circuit, and the songs translate to non musicians as well.  They got their start in Boston, playing the same bar over and over, until eventually they got a tour, and the rest is history.

The next cover was on the set list was the Band’s Up on Cripple Creek.  Rob sang and Eli had the organ parts (Moog) down to a science.  The crowd was really into it, and I dug it as well.  More originals followed and then the next cover of the second set was The Who’s My Generation.  The band played it well, and the seminal classic rock song was sung well by Rob. This was opening a door to the 60s in an era where a lot of life felt like a detached video game scenario.

Back then what was real was real, and to be pulling off a show like this the same day Facebook introduced Meta, all things coincided to be a wonderful night.  I went home to see the video on Meta, which is augmented reality somewhat like astral travel.  I stayed up a little while and watched Grateful Dead videos, somehow realizing how much the world had changed since the 60s.  With advances in technology, the world is so new and exciting.  I can’t wait to see what comes next.  Dopapod wowed me, and I hope you get a chance to see them on this huge tour in the coming months.

+Sly and the Family Stone cover
=Performed solo by Chuck

From a show earlier on this tour: