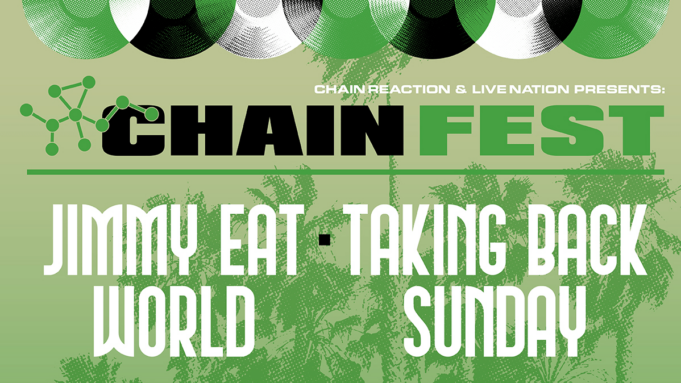 Chain Fest at Five Points Amphitheater in Irvine, California on October 23rd was a success on every level.

From the professionalism of the entire staff to how event was seamlessly coordinated to the diversity of the food offered on the many food trucks available for patrons and all kinds of drinks including many cocktails and beer available, this was a triumphant return to Southern California for Chain Fest. Even the port-a-potty accommodations were well maintained and kept clean throughout the entire day well into the evening.

The main highlight of Chain Fest were the incredible rosters of bands that played. The headliner was Jimmy Eat World along with Taking Back Sunday, Circa Survive, Mayday Parade, Anberlin, Cartel, Envy on the Coast and The Summer Set. Watching the show in its entirety, one could say all the bands ranged from very good to excellent. Typically, the bands in the “lower echelons,” get sort of beat up on for not having the greatest songs or sort lackluster or mediocre or even forgettable sets.

However, that was not the case at all at this event. Even maybe with the acts that have somewhat lesser visibility really delivered the proverbial goods live. The music just grew stronger and went from strength to strength throughout the entire day into 10 p.m. hour and beyond. All the groups were incredibly happy, grateful and excited to play out live again given the very restrictive situation, devastating lockdown and ensuing virtual shutdown of the entire music industry because of the ongoing COVID-19 pandemic.

All expressed those sentiments in one way or another during their sets and their fans responded in kind with cheers, applause, videoing and taking photos as well as standing throughout each band’s performance. The acts really were moved and appreciative of their many fans that came out to support them. There was so much enthusiasm, positivity and strong vibes emitting from the massive crowds Chain Fest drew in huge numbers. It was really incredible event and showed that live music well and alive again and continuing on as more than business as usual. The passion and commitment to being artists was on display in each act on that gigantic stage and the fans that support them. It was an wonderful thing to be part of and see was really quite moving and hell of a lot of fun to watch and hear.

I really felt closest to Mayday Parade who just really stuck out of an incredible lineup. You could see the songs were cohesive and just expertly performed. Circa Survive threw down a set of pure intensity.

For me, I say Taking Back Sunday, though incredibly commercial, were so much fun and really cocky in a way that was comical with their asides. Their onstage banter included inside jokes and they were just having a really great time, which extended from stage and into the audience.

The whole show featured some much energy and enthusiasm from all of the bands. Jimmy Eats World gave an exceptional set and played many songs the fans knew and loved with sincerity and realness.